Changes in hours and security were being discussed by major retailers as the looting attacks cast a grim shadow on Thanksgiving shopping for thousands of stores and their customers.

The dozens of looters who rushed Walnut Creek's Nordstrom on Saturday night made off with between $100,000 and $200,000 worth of merchandise, Walnut Creek police said Monday.

Walnut Creek Police Lt. Hollie Connors said up to 80 masked bandits blocked the street up and down Broadway Plaza with up to 25 vehicles that had license plates covered from possible identification.

Though the city had begun placing officers inside Nordstrom earlier this year after similar smash-and-grab robberies, no officers were on site just before 9pm Saturday when the coordinated attack took place.

Three employees were injured, including one who was pepper-sprayed.

Police arrested three suspects Saturday night, at least one with a gun, as dozens more fled.

The robbery may have been part of a larger string of robberies happening at jewelry and other high-end stores around the Bay Area.

Connors said it's not clear whether there's a connection. She said police believed another attempt would be made at Nordstrom Sunday night, and police blocked off ether end of the street and put its ready and react team on alert. No trouble was reported.

“I don't know if that made them divert, or what happened,” Connors said. "We had some information that that same group might come back. We prepared.”

Walnut Creek Mayor Kevin Wilk said the city will keep Broadway Plaza free of cars at least through the holidays.

“This is really all hands on deck,” Wilk said. “We'll have more police downtown. We'll be monitoring online chatter and communicating with all our stores.”

She said there was an officer posted at the nearby Apple Store Saturday night, who was alerted to what were initially reported as a high number of reckless driving incidents around the plaza. Police responded quickly, but were hampered by the sheer number of suspects driving away in so many vehicles.

“We doing what we can do, with increased foot patrols on weekends,” Connors said, adding that departments may need better coordination and more joint efforts.

Wilk said he expects more arrests as more video evidence is analyzed. He spent much of Monday in meetings about the city response, including discussions with other mayors on how to coordinate. He said the city also needs county help.

“We need the D.A. to charge and prosecute these cases to the full extent of the law,” Wilk said. "If people see they're going to be caught, they'll think twice. We need to make people feel safe in Walnut Creek. We demand it.”

No arrests were made. The suspects fled in several vehicles, Hayward police Lt. Mark Ormsby said.

The Hayward incident happened about an hour before a group of thieves hit high-end athletic apparel store lululemon in San Jose.

San Jose police say a group of suspects entered lululemon in Santana Row at approximately 6:30pm Sunday and made off with merchandise. 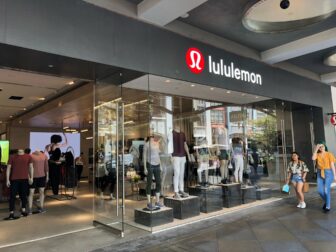 Ormsby said it's still too early to tell if the incidents are related.

Police estimate up to 80 people stormed Nordstrom in Walnut Creek Saturday night, assaulting three employees and making off with thousands of dollars in expensive goods.

Police on Sunday were reviewing surveillance footage in hopes of tracking down more suspects involved in what authorities described as an organized looting at Walnut Creek's Broadway Plaza on Saturday night.

Three suspects were arrested shortly after the mob descended on a Nordstrom department store about 9pm, police said.

An 18-year-old Oakland man and two people from San Francisco, ages 30 and 32, were taken into custody on suspicion of crimes that include burglary, robbery, conspiracy and possession of stolen property. Police also seized a gun from one of the suspects.

About 80 people were involved in the looting spree and most drove away at high speeds after ransacking the store, police said

Two Nordstrom staffers were assaulted during the looting and one was pepper-sprayed. The event was clearly planned, Walnut Creek police said.

The brazen looting followed on the heels of another mob that descended on several retail outlets in San Francisco's Union Square on Friday night.

Police have arrested multiple suspects in the San Francisco thefts.

Police in Walnut Creek are alerting businesses and residents that looters who targeted the Nordstrom store Saturday may be planning more thefts..

“This has not been confirmed, but out of an abundance of caution, we're alerting businesses and residents to be prepared,” Walnut Creek police said in a community-wide social media advisory.