Kansen Chu says he’ll refrain from endorsing anyone in the race to succeed him in the state Assembly—at least in the primary. But he came close on Friday by donating $500 to AD 25 candidate Jim Canova at his kickoff party.

It was a lively affair at Santa Clara Councilwoman Teresa O’Neill’s house, with a guest list that read like a “who’s who” of Mission City. Canova, a 27-year trustee of the Santa Clara Unified School District, celebrated alongside board colleague Mark Richardson, council members Kathy Watanabe, Debi Davis and Raj Chahal and Mayor Lisa Gillmor. MetroEd Superintendent Alyssa Lynch showed up to support Canova, who has promised to prioritize vocational training agencies like the one she leads.

China Stix catered a full spread as guests nibbled on cookies iced with Canova’s name and campaign logo. At Richardson’s behest, Gillmor and Watanabe engaged in a bidding war over the only glass of milk, driving the price up to $750. 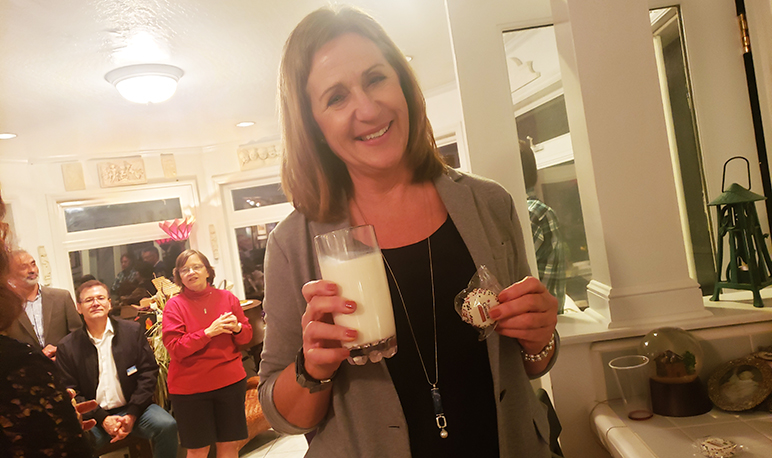 Mayor Gillmor with her very expensive glass of milk.

Canova told Fly he was especially excited to have Assemblyman Chu and his wife Daisy Chu at the party. In the early ’90s, as a Teamsters truck driver, Canova said he used to deliver food to the Chus’ restaurant, Ocean Harbor. The couple toasting his run for higher office brought things full circle.

“They used to feed me on those deliveries,” Canova recalled while greeting guests at O’Neill’s front door. “I remember Daisy would bring out these wonderful meals.” In an emotional speech later that same night, Canova told the Chus, “It’s people like us who need to be elected.”

Chu sent local pols scrambling earlier this year when he announced that he’d eschew another term in the Assembly to instead try for for Santa Clara County Supervisor Dave Cortese’s seat in District 3.