In the decade he’s taught heating, ventilation and air-conditioning at Silicon Valley Career Technical Education, James Falcone has received a fortune in donated equipment from companies wanting to support the program that trains their future workforce.

Over spring break, however, the instructor fielded a uniquely generous offer.

Ernesto Yanez, the 62-year-old owner of Master Maintenance, phoned Falcone’s department looking for a student with the chops to eventually take over his 27-year-old HVAC company. To Falcone, the call affirmed what he’s always told the high schoolers and young adults he teaches at the San Jose vocational school: that a wealth of opportunity awaits in blue-collar industries.

For Yanez, who’s preparing for retirement, it’s a way to pay things forward as he winds down his own career. “This training leads to a very good future for a young person who wants this,” says Yanez, who says his interest in the field stems from a childhood enduring Southern California’s 120-degree summertime desert heat.

In a nearby lab, students hammering together wood frames don vests from Swinerton Builders and other local construction companies hoping to lure prospective hires from the class for jobs that start out at $28 to $30 an hour. A door over, banners advertising Cupertino Electric and Therma adorn the electrical engineering lab, where veteran instructor Ray Sugden prepares students for work that can earn them a six-figure salary within five years. In the thick of last year’s devastating fire season, Cal Fire approached the school’s fire science academy, promising to hire every graduate from the program. In the automotive services division, classrooms tinker on cars donated by Subaru.

Similar school-to-career pipelines are forged at SVCTE through 24 programs in about a dozen industry sectors, including fashion, cybersecurity, forensic science, vehicle mechanics and coding. All told, more than 200,000 students have received training through SVCTE. But the future of the courses that foster those connections in Silicon Valley’s booming STEM, blue-collar and “new-collar” jobs sectors is headed for disaster.

Without more funding, officials say the Metropolitan Education District—the long-running agency that runs the training center known as MetroEd—will become insolvent within the next few years. Despite upping enrollment from 1,110 to nearly 1,400 in the last five years, its budget fell from $15.7 million in 2007-08 to $11 million by the latest count. At this rate, MetroEd faces $3.3 million in deficits through mid-2021.

“We feel so hopeless,” MetroEd board president Katherine Tseng says in a phone interview Monday morning. “People want these programs, but if we don’t take care of the financial side, then we just cannot sustain them.”

Because the district has to budget three years ahead without knowing how much money it will get beyond that first academic calendar, he says, it has to brace for the worst. “The way that funding is made available in public education is literally insanity,” Herrera says. “And that’s completely compounded by the fact that MetroEd is a joint powers agency.”

MetroEd has existed in some form or another since San Jose High School began offering adult education in the 1860s. But its current iteration traces back to 1983, when six districts—Campbell Union, San Jose Unified, East Side Union, Los Gatos-Saratoga Joint Union High School, Milpitas Unified and Santa Clara Unified—created a joint powers agency with its own board and staff to provide career training and adult education.

Having so many stakeholders at the table made governing the agency more complicated, especially once California enacted reforms in 2013 that gave districts more control over their finances. Instead of channeling funding directly to MetroEd, the state allocated it to those six participating districts. That made already heated budget talks at MetroEd all the more contentious, as the appointed board butts heads with an advisory executive council made up of each district’s superintendent and chief business officer.

One superintendent threatened to terminate state grant funding dedicated to MetroEd, and two—San Jose Unified and East Side Union—toyed with the idea of withdrawing from the joint powers agreement, which would dissolve the agency entirely. A source with knowledge of the negotiations characterized some of conflict as “an attempt to “bully MetroEd and undermine the authority” of its autonomous governing board. 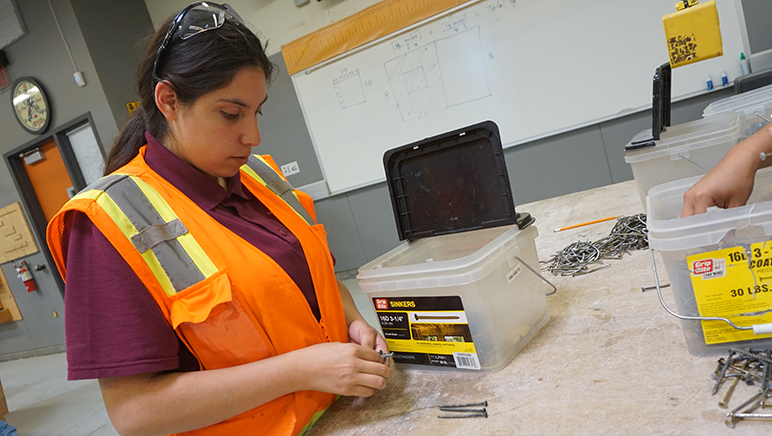 SVCTE has been trying to encourage more female students to sign up for its historically male-dominated building and trades courses. (Photo by Jennifer Wadsworth)

Tseng, who represents the Los Altos-Saratoga district on the MetroEd board, says people are quick to voice support for career training programs but slow to put back it up with adequate financial resources. “It’s hard to access money once it’s already put into someone else’s pocket,” she explains.

The switch to the so-called Local Control Funding Formula, which impacted all public career centers in California, coincided with MetroEd Superintendent Alyssa Lynch succeeding Paul Hay as head of the agency.

Like her predecessor, who steered the organization through the recession in the late ‘aughts, Lynch had to make some tough decisions.

Transportation costs increased this past year by $300,000 as funding continued to fall off. Grants that sustained MetroEd for the past few years are coming to an end. While the six local districts continue to fund the agency, Lynch says it’s not enough to keep up without making more desperate cuts.

Financial constraints notwithstanding, Lynch managed to replace a dozen low-enrolled sections with high-demand science and technical courses during her tenure. She also boosted the number of corporate partnerships up to 125 and available internships for students up to 450. The average pupil per section rose from 17 to 24 as the rate of students going on to college grew to 44 percent.

If only that were enough. 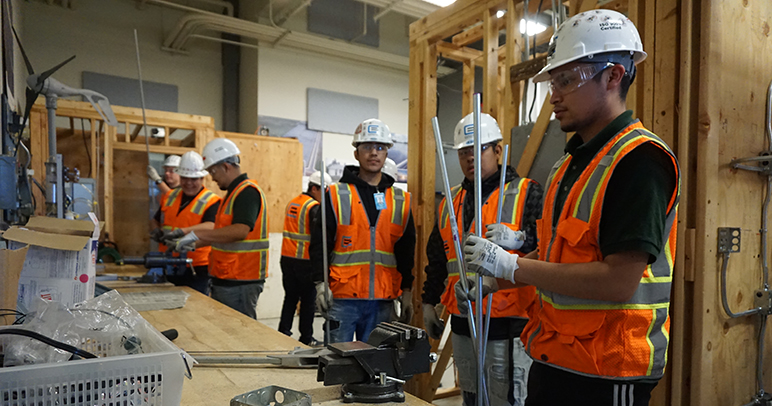 “We can no longer keep pace with other districts with salaries and raises,” Lynch says via email earlier this week. “Our districts struggle with funding issues as well with many families moving away from Silicon Valley.”

Unless the joint powers authority comes up with a new master agreement that siphons additional funding to MetroEd, Tseng says she doesn’t know whether it will survive.

Meanwhile, time is running out. The current agreement sunsets on June 30. If the board fails to drum up a revised version by then, the current pact will roll over.

Lynch and her staff have been aggressively, assiduously lobbying for a new agreement, which remains a tenuous proposition even after eight board study sessions and about a dozen other meetings with the leaders of each district.

Troubled by what he sees on the horizon, Hay emerged from retirement in Oregon to draft an urgent call to action. In his assessment dated March 29, the former superintendent—who spent six years of his decade tenure at MetroEd as chief business officer—says disquiet about the agency’s future undermines the health of the agency.

“From my experience, the adversarial and contentious tone by some during funding negotiations, and the constant uncertainty about the future solvency of the [joint powers agreement] takes a toll on the morale of the MetroEd and SVCTE staff,” Hay wrote in the four-page memo, which he penned at the behest of Lynch and MetroEd trustee Jim Canova. “I lost employees because of the uncertainties, and I understand Alyssa has as well. For the most part (Milpitas was always the exception), it has felt that funding by the districts was provided reluctantly.”

MetroEd trustees describe feeling a moral imperative to maintain continuity in the district, which they say has lifted thousands of people out of poverty and given students an alternative to four-year college degrees.

“Every meeting of the MetroEd board, we hear one or more testimonies directly from students who are in the programs or are recently graduated from the programs, and it can bring tears to your eyes,” Herrera says. “Students who were falling through the cracks in mainstream schools, who found purpose in life to succeed in this challenging economy. And the quality of the programs that have been developed there are remarkable, because they are strengthened with direct contact with people in the industry who provide equipment, partnerships and internships. It’s truly amazing and it just makes you proud to be part of an effort like this in our community and in our region.”

Students like Rick Settle, 17, who walked into Falcone’s class at the start of the school year feeling somewhat intimidated by the complicated machinery in the lab. As he’s closing out a second semester in the program, he says he’s confident enough to apply for that job with Yanez at Master Maintenance.

“Definitely,” he says excitedly. “That looks like a great opportunity.” 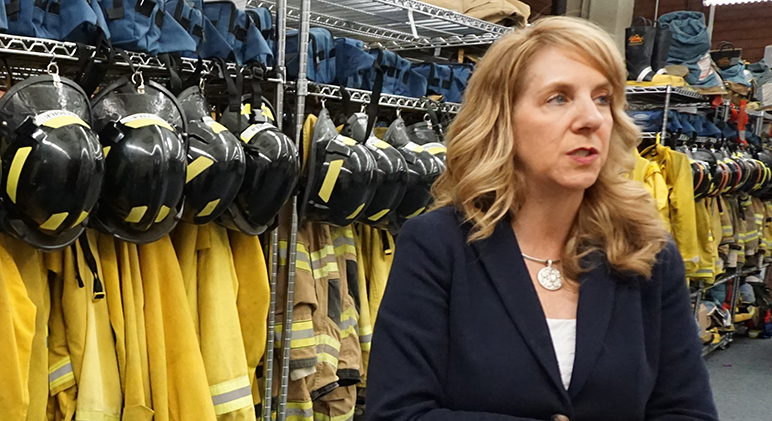