Santa Clara will hold a public hearing on today about one of the largest proposed development in the city’s history.

But some local residents are concerned about the project’s impact on traffic. Over 200 people have signed a petition started last month by analytics consultant Santa Clara resident Jason Feinsmith to demand that city officials to impose a 170-foot height limit on the proposed skyscraper.

Property owner Kylli—a subsidiary of Chinese pharmaceuticals and real estate company Genzo—is proposing for Mission Point, a development planned near Levi’s Stadium at 3005 Democracy Way, to comprise 23 buildings and reach up to 370 feet high. That’s over twice as tall as the tallest structure in Santa Clara, the Hyatt Hotel.

“More housing—that’s good,” Feinsmith tells San Jose Inside. “But this is a very extreme proposal. It will increase the number of residents in Santa Clara north of Highway 101. Our goal is not to stop the project. Our proposal is to limit it to 170 feet. We’re still talking about 15 stories.” 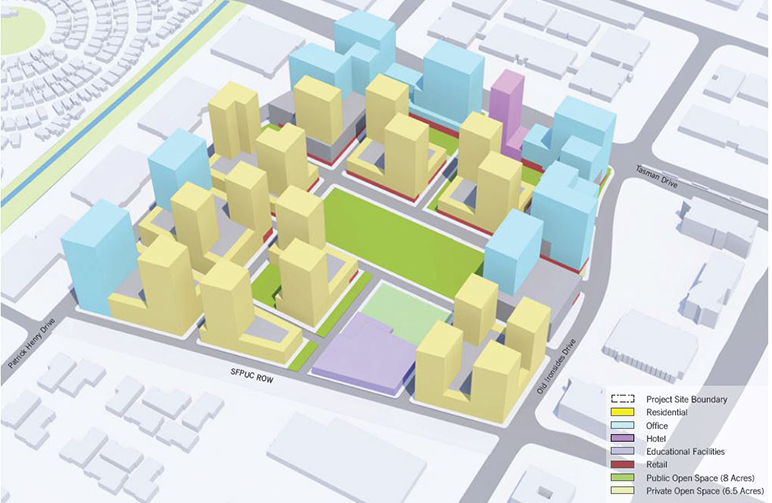 Feinsmith says traffic will only worsen with the city already replacing the golf course by Levi’s Stadium with an $8 billion mixed-use development. That’s why he’s urging city officials to limit the project’s building heights. “It’ll still be a burden,” he says. “But it’ll be bearable, as we need housing in the Bay Area.”

Earlier this fall, the Federal Aviation Administration (FAA) raised concerns about the proposed building heights, saying the high-rise would interfere with radio frequency.

In response to the FAA’s concerns, Kylli Vice President Randi Gerson wrote in a letter to the city of Santa Clara’s community development director, Andrew Crabtree.

“Based on both the initial FAA findings and community feedback, it has been determined that the heights as shown in the application on file must be further reduced,” Gerson wrote. “Kylli is working with an aviation consulting firm that will assist us with navigating the FAA process.”

Kylli has already reduced its building heights from its original proposal in 2018, when it planned to build a 600-foot tower along with an array of other structures  that would reach around 400 feet.

“That was ridiculous,” Feismith says. “They’re coming to build a little Shanghai in our neighborhood. An inherent concern is conflict of interest—this is a company from China, they have no concern for the burdens of the local community.”

The public hearing takes place at 6pm tonight at Santa Clara City Hall, 1500 Warburton Ave. Click here for the agenda. (This article has been updated.)