As San Jose strives to meet its environmental goals, city officials announced today that they would be receiving $14 million to install more electric vehicle charging stations.

The biggest chunk of the investment—$10 million—will come from the California Energy Commission. And the remaining $4 million, which was approved unanimously by the City Council Tuesday afternoon, would be allocated from San Jose Clean Energy.

“This is not a strategy for more Teslas,” San Jose Mayor Sam Liccardo said at a press conference. “Twenty-five percent of these dollars will be targeted in low income communities trying to insure that everyone can benefit from the green dividend, particularly given what we know about auto emissions and clean air and the necessity of improving the quality of our air in many of our struggling communities.”

In February of 2018, San Jose approved its Climate Smart plan to help reduce the amount of greenhouse gases the city produces. Part of the initiative involves getting gas-guzzling cars off the road and replacing them with cleaner electric vehicles. San Jose officials say they hope that by 2030, 61 percent of passenger vehicles citywide—or 153,200 cars—are electric. As of October last year, California’s Department of Motor Vehicles said that San Jose had only 23,170 registered electric cars.

“As a member of the assembly transportation committee, we have voted on bills to offer incentives to the people to buy a second hand electric vehicle,” Chu said. “I’m really delighted to know that 25 percent of the money is spent on installing the electric vehicle charger[s] in the low income [areas], the East Side or closer to my ’hood. I think it will definitely encourage more people to really be part of this new era.”

The $10 million investment from the state is part of a larger program called the California Electric Vehicle Infrastructure Project (CALeVIP). Santa Clara and San Mateo counties also expect to get up to $60 million to build electric vehicle charging stations.

Under the program, the charging stations can be in public or private places, but are not currently available for single-family homes. The incentive will cover a part of the cost of the charging station and any upgrades that need to be made to the electrical infrastructure in order to install them.

With $14 million from the state and San Jose Clean Energy, the city will offer two different incentives: one for “superchargers,” also called Direct Current Fast Chargers, and the other for Level 2 chargers. (Source: City of San Jose)

San Jose Clean Energy is in the process of negotiating another incentive for new affordable housing projects. At the Tuesday hearing, Councilman Johnny Khamis asked to utilize the CALeVIP funds for charging stations in new multi-family homes that are subject to the city’s new reach codes. 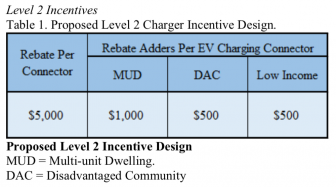 But Lori Mitchell, the director of San Jose Clean Energy, said new construction won’t be eligible under the program.

“I thought that this could actually help us with our reach codes because we created reach codes that are going to drive up the cost of construct[ion],” Khamis said. “I am a little concerned that we’re putting hurdles in the way of doing construction and we’re not giving people a hand up.”

East Side Councilwoman Magdalena Carrasco said she was especially pleased that 25 percent of the money was pegged for lower income communities. She said she recently bought a hybrid van, and while it’s easy for her to find a place to plug in near Santana Row, she said she struggles to find a place to charge it in her own neighborhood. “My residents may be lower income than some other areas ... but we drive,” she said.