Santa Clara got swept up in the NFL’s domestic violence controversy after city leaders were called out for watering down a resolution that would have taken a shot at their new business partners—the 49ers.

It started last week with a resolution proposed by Next Door, a San Jose-based nonprofit dedicated to helping victims of abuse. The group demanded that the team bench defensive lineman Ray McDonald until the case stemming from his August arrest on suspicion of domestic violence is resolved.

Next Door CEO Kathleen Krenek submitted a strongly worded statement to Santa Clara city officials last week, only to learn that she missed the deadline to place it on the next council agenda. Mayor Jamie Matthews, however, drafted a resolution of his own. The mayor’s proclamation echoed Krenek’s stance against domestic violence—minus any mention of McDonald.

This is what Krenek's original resolution looked like. And here's a link to Matthews' kinder, gentler version.

Krenek, who had spoken to reporters all month about keeping a close eye on the NFL as it deals with players caught up on domestic violence charges, told Phil Matier of the San Francisco Chronicle that she was disappointed in Matthews’ watered-down resolution.

“No Ray McDonald? I guess they don’t want to rock the boat with their new business partners,” she reportedly said, referring to the council’s approval of an $850 million loan to build the new Levi’s Stadium.

Krenek also vowed to bring a “show of force” to the council meeting. “I’m disappointed, but this is the best we are going to get,” she told Matier.

But sometime between Sunday and Tuesday’s council meeting, it looks like Krenek changed her mind. Just before the council met, she sent out a press release alleging that Matier had misquoted her.

“I’ve never known of a time where somebody took so many things out of context,” she told San Jose Inside. “He kept prodding me. I think he wanted there to be a controversy where there was none.”

During the council meeting, which you can watch here, Krenek speaks extemporaneously except for a moment when she reads off her notes, to explain why she changed her mind on the resolution. Krenek offers to “work with you,” she tells the council, promising to address the issue in the community.

Some people weren’t pleased. Council candidate Mohammed Nadeem spoke up, saying the resolution does not go far enough. Mayoral candidate and Levi’s Stadium critic Deborah Bress says she was a victim of domestic violence and thinks the council should take it a step further. Councilwoman Teresa O’Neil and her colleague Lisa Gillmor agreed, raising questions about why Next Door lost heart.

“I’ve had people who are ardent fans of the 49ers say to me that they are very disappointed that they haven’t come out and made a stronger statement, or taken action,” O’Neil said at the meeting. “The 49ers are our partner and I think we should be asking more from them."

The exchange wraps up when Patty Mahan comes out in support of Matthews’ resolution and promises to partner with Next Door to use city funds for public anti-violence education.

Krenek told San Jose Inside that, despite her earlier criticism, she welcomed the new, vaguer resolution because it broadened the issue.

“Everybody’s talking about Ray McDonald, but maybe it’s time to step back and look at how this affects our own community,” she said.

Her reasoning was very similar to Matthews'.

“Although the high-profile instances that have occurred in the NFL provided the opportunity for us to highlight the issue, the broader message is that it happens everywhere and there is nowhere that’s acceptable for it to occur,” he told San Jose Inside Wednesday. “By having a broader message, it’s more than just a news cycle or a single-story, it’s an affirmation of what should be every community’s commitment to address this issue and for our individual and collective responsibility to speak up and speak out when we know it’s occurring.”

It could be that Krenek felt pressured to comply with the mayor's wishes, considering her organization gets funding from the city, where it has run a shelter for the past 15 years.

For her part, Krenek says she's signed several petitions asking the 49ers to bench McDonald for the duration of his criminal investigation.

"I still think he needs to be banned," she said. 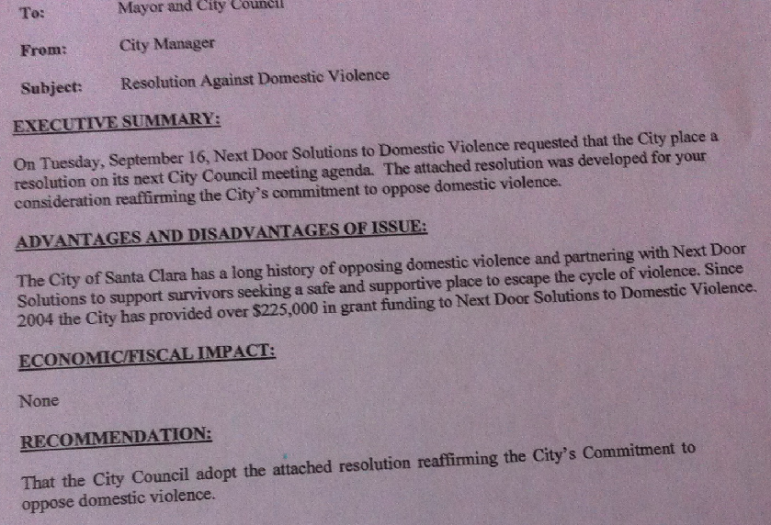