Plans to build an office tower and storefronts on the site of a historic diner and the Century theater domes in west San Jose have triggered opposition from preservationists, a neighboring city and a developer.

San Jose’s City Council on Tuesday will consider whether to approve the environmental review for Santana West. The Federal Realty project proposes to bring nearly a million square feet of office space and 29,000 square feet of storefronts to a 13-acre site right off the Winchester corridor.

Preservationists have been keeping a close eye on the property, which houses three shuttered Century dome theaters and the 50-year-old Flames restaurant. The project proposes razing two of the domes and turning the new one into something else entirely. Ideas pitched earlier this year involved flipping the dome into a storage facility or an entertainment venue.

Mayor Sam Liccardo wants to put more thought into how to breathe new life into the shuttered theaters. In a memo co-signed by Vice Mayor Rose Herrera and council members Chappie Jones, Pierluigi Oliverio and Magdalena Carrsco, the mayor suggests pushing the conversation back to a later date to come up with something more creative than a “mere mini-storage use.”

Tentative pitches include an open-air amphitheater (which would probably entail sawing the structure in half or stripping it down to its metal frame), public plaza or park. 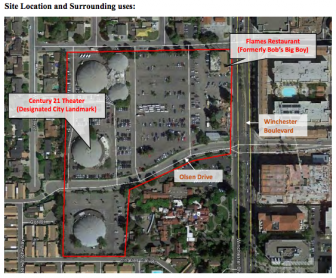 Traffic was another major concern raised by neighbors and other members of the public.

In the mayor’s memo, he mentions that Federal Realty would pay $1 million in traffic fees to make up for the impact of the development and invest $4 million for new traffic signals and other roadway improvements. Another $1 million would come by way of a voluntary contribution to the Valley Transportation Authority for public transit upgrades.

But the city of Santa Clara and owners of the nearby Winchester Ranch Mobile Home Park challenge the validity of the environmental review for Santana West.

Thomas Law Group, which sent a letter on behalf of Santa Clara, claims that the report fails to account for how the development would affect traffic, noise and pollution. There’s some question about whether the opposition has anything to do with San Jose’s objections to City Place, a $6.5 billion mixed-use project by Related Companies Santa Clara. San Jose filed a lawsuit over City Place this past summer claiming that it doesn’t include enough housing to account for its project job creation. For more on that, check out this Silicon Valley Business Journal report.

The public review for Santana West’s environmental impact report ended in August. To read the full report and related planning documents, here’s a link to the city’s landing page for the project.

More from the San Jose City Council agenda for September 20, 2016: