The search for Silicon Valley’s own iconic landmark and global destination has reached the finish line, but the project’s next steps may not be a breeze.

“Breeze of Innovation” was unanimously approved by the San Jose City Council Tuesday, officially crowning the 200-foot structure as the winning design and putting in motion a work plan for next phases.

As the last project standing of 963 submissions from 72 countries, Breeze of Innovation will feature around 500 flexible stainless steel rods, designed to move with the wind, generate power and support walkable platforms at Arena Green, a city-owned park in between the Guadalupe River and the SAP Center in downtown San Jose.

The structure, meant to highlight Silicon Valley’s innovative legacy and pay homage to the city’s long-collapsed 1881 “Electric Tower,” will be gifted to the city by the San Jose Light Tower Corp., the nonprofit responsible for the initiative.

Steve Borkenhagen, the nonprofit’s executive director, was feeling optimistic ahead of Tuesday’s discussion and vote.

“We've had meetings with all the council members, told our story and every one of them seems to love our vision,” Borkenhagen told San Jose Inside.

Even though the project got the green light, lingering questions, such as funding the estimated $100 million price tag and studying the environmental impacts, will continue through the life of the project. Those tasks may take city staff members across all city departments more than 1,000 hours to work through in the coming year, city documents show.

“We believe investors including individuals, corporations, and foundations will see the value of our project in improving the quality of life in our community,” Borkenhagen said. “Beautiful landmarks bring great joy to citizens.”

The Light Tower Corp. plans to hire a contractor as early as this summer to work alongside Fer Jerez and Belen de Juan of SMAR Architecture Studio, the Perth, Australia-based design team behind the project.

A schedule for the project will be formed over the next four months. Then San Jose councilors will take another vote to approve or reject the final designs before any shovels hit the ground. 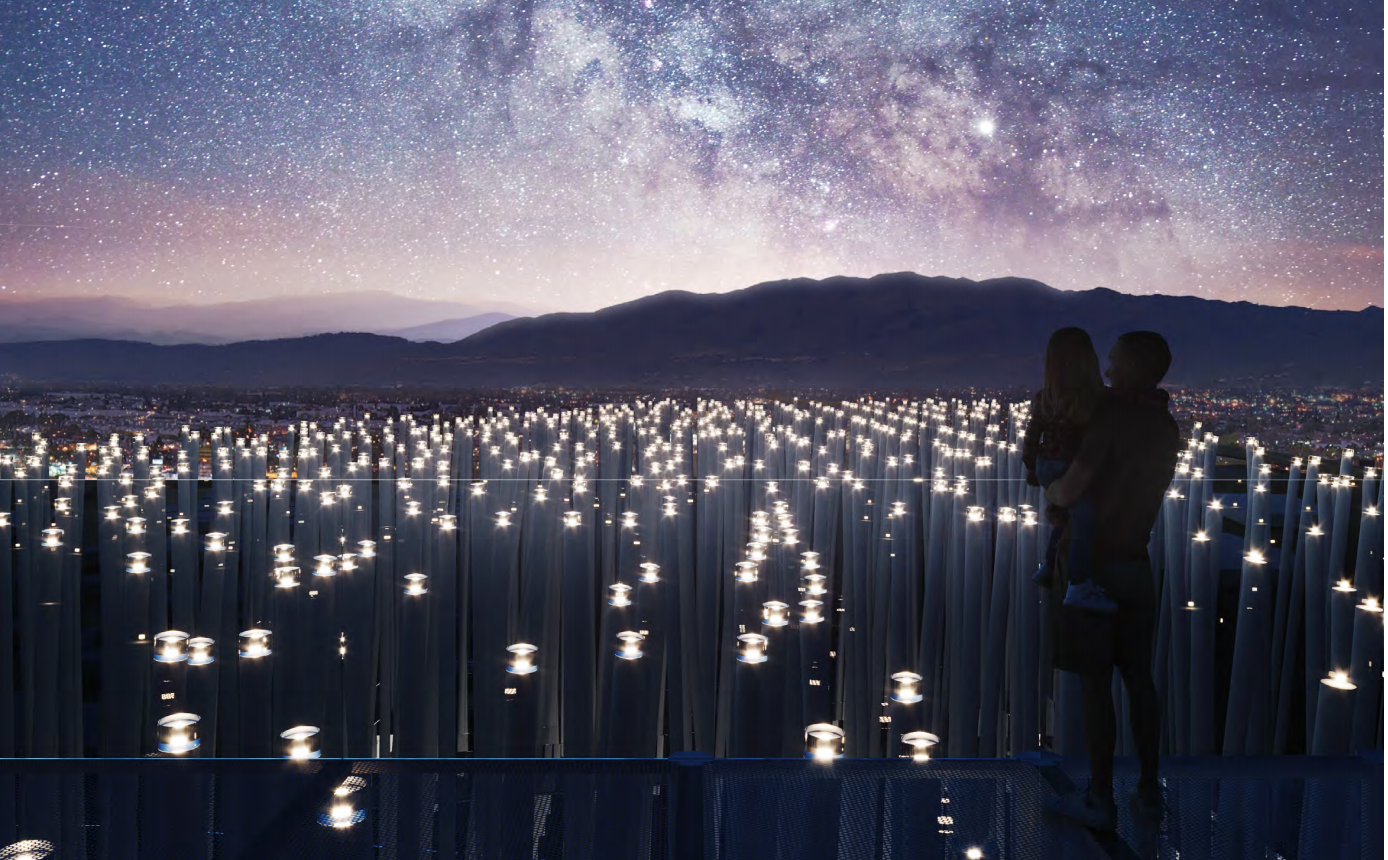 But already, some advocates and residents are pushing back on the project.

By Tuesday, the city had received 164 pages of emails, including 103 questions from San José Park Advocates and local Sierra Club and Green Foothills members, who hope to halt approval over concerns around equity and cost. Many also worried about impacts on airplane operations and the nearby environment and wildlife.

Borkenhagen acknowledged the comments piqued council members’ attention ahead of Tuesday’s meeting. But he said those environmental concerns were already baked into the required reading for design submitters in 2019.

The Light Tower Corp. worked with Los Gatos-based H.T. Harvey and Associates, a behavioral ecology consultant, to publish recommendations that the designs incorporate blinking, kinetic lighting, ideally those that are blue-hued, which is least disruptive to bird migratory paths and fish sleep cycles.

In Breeze of Innovation, the rods’ LED lights will only illuminate in the wind, according to design renderings submitted by SMAR Architecture Studio.

“The claims of the detractors about light pollution and other environmental degradation are simply not true,” Borkenhagen said. “We clearly stated that we are going to follow all scientific guidance necessary, so anybody who says otherwise is simply saying things that are not correct.”

Before casting their votes Tuesday, San Jose councilors mulled the public's concerns and confirmed robust community engagement efforts will happen before any design plan is finalized and analyzed for environmental impacts.

Additionally, The Light Tower Corp. will continue to host its own community meetings, which will be scheduled on the Urban Confluence website.

Tuesday's City Council discussion can be viewed on Youtube.