Fire investigators reported Sunday that the site of the five-alarm fire that destroyed a Home Depot store on Blossom Hill Road in San Jose April 9 was still too unstable to allow them to sift through the rubble and identify the cause of the spectacular fire.

In a press statement issued at 6:30pm April 10, the San Jose Fire Department confirmed that that no one was injured in the fire, that the fire appeared to have started in the lumber area and that the cause of the fire was not suspicious. 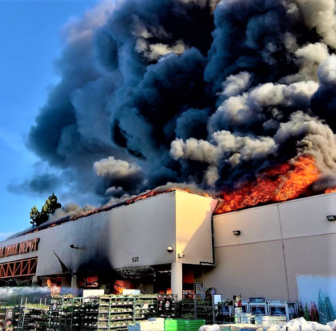 The San Jose Firefighters Union posted images of the Home Depot fire on its Instagram pages, including those taken by firefighters, ABC7News and NBC Bay Area.

The 5:30pm April 9 Home Depot fire forced the evacuation of employees and also of pets in an adjacent animal hospital  and burned for more than six hours until nearly 100 firefighters got it under control at 11:44 pm.

Officials said Sunday evening that fire officials are investigating whether the two fires spotted by the helicopter crew – which were immediately reported to the San Jose Fire Department – were connected to the Home Depot fire. 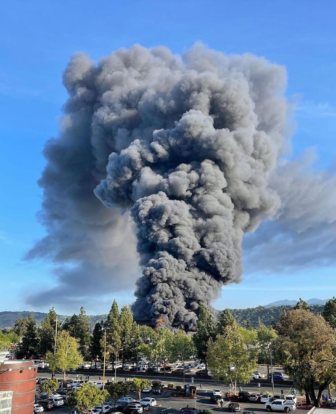 Smoke billowing from April 9 Home Depot fire was seen for miles across the Bay Area.
Photo from San Jose Firefighters.

All the store's customers and employees at the 920 Blossom Hill Road store site escaped the fire safely. Officials said Sunday evening all the animals from a nearby vet hospital were safely evacuated, and a reunification site was set up at the nearby Golfland for pet owners. Any remaining animals were at San Jose Animal Care Center Sunday evening.

A shelter in-place order was lifted for south San Jose residents Sunday afternoon once air quality improved. People living or working in the El Lisa Drive area were ordered to stay inside due to unhealthy air quality caused by drifting smoke. The fire was intense enough to show up on radar systems and satellite images, according to the National Weather Service.

Home Depot workers said the blaze began in the southwest corner of the store.

According to the San Jose Fire Department, the fire is believed to have started in the lumber and drywall section of the store, but they said the Investigation is likely to take several days.

“The primary goal for firefighters was to contain the massive fire from spreading to other businesses located within the strip mall-type structure, which included a vet hospital and additional hardware store,” fire officials reported Sunday evening. “Crews successfully prevented the fire from extending beyond the business of origin.”

Approximately 15 homes located directly behind the Home Depot on El Lisa Drive and the businesses co-located in the structure were evacuated during the fire attack. Firefighters said they were able to allow residents back into their homes late Saturday. Most evacuated animals have been reunited with their owners and any remaining are now at the SJACC awaiting reunification, according to the fire department.

The shelter in place was lifted on Sunday at 12:30 p.m. after the San José Fire Department Hazardous Incident Team determined, through testing, the air quality was good and no longer a concern.

“There is currently no indication this fire was suspicious in nature,” fire officials said. “While overhead the fire, Santa Clara County Sheriff Department’s STAR1 helicopter observed two fires nearby and quickly reported them to SJFD. It is not clear at this time whether those fires were connected in any way to the fire at Home Depot. SJFD is looking into this matter and can provide more information at a later time.”