Over the last two weeks, San Jose Inside has given readers a look at the primary contests for five on the San Jose City Council: District 2, District 4, District 6, District 8 and District 10. With just a few days to go until Election Day, this installment will focus on the most closely watched race for the Santa Clara County Board of Supervisors.

Here’s a guide to who they are, what they’re running for and what’s at stake.

Santa Clara County’s District 3 encompasses Milpitas, parts of Sunnyvale and the Alviso, East Foothills, Berryessa and Evergreen neighborhoods of San Jose. The diverse, expansive district touches the boundaries of Alameda and San Joaquin counties on its northern edges and meets Stanislaus County in the south.

After serving the maximum of three terms on the county board, Dave Cortese is making a bid for higher office with his campaign for the 15th State Senate District.

Forty-year-old John Leyba jumped into the supervisorial race because some of the region’s most pressing issues—like homelessness—fall under the county’s jurisdiction.

“I think the county could be doing a better job focusing on those core responsibilities,” he told San Jose Inside in an interview.

A self-described fiscal pragmatist, Leyba grew up in San Jose’s Alum Rock neighborhood to adopted parents. He says he takes pride in having graduated from Alum Rock’s public schools before going on to attend Archbishop Mitty High and Dartmouth College, where he earned degrees in public economics and finance. 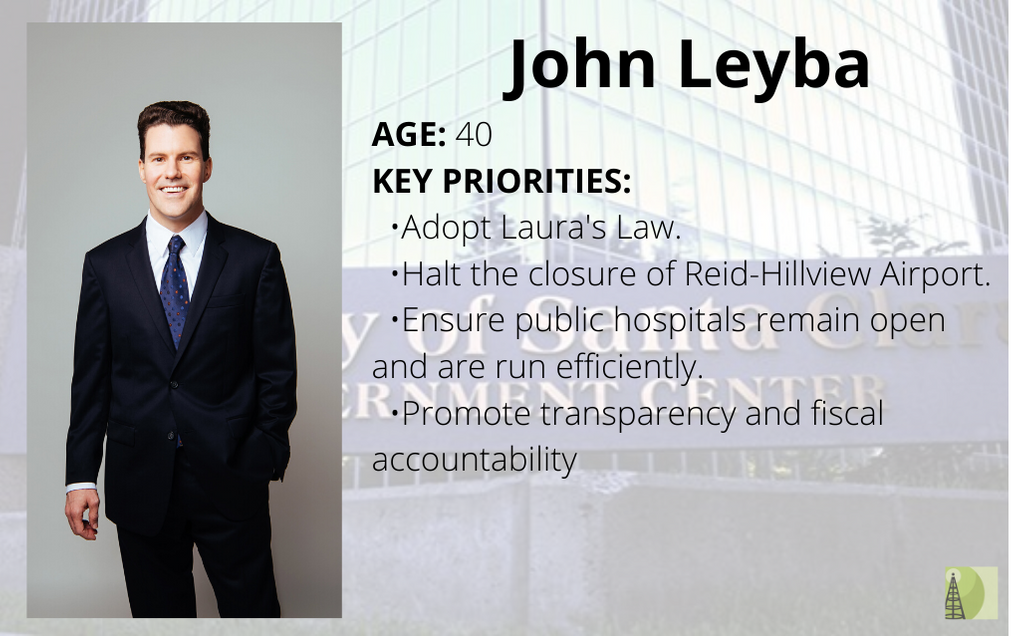 In his professional life, he spent the last 15 years working in the high-tech and energy fields in project management and analytic roles. But it was through Leyba’s efforts to improve the East Side schools he was raised in that he met his wife, school teacher and Alum Rock native Marisol Andrade, with whom he’s raising two daughters.

Leyba is part of a growing number of residents and local officials who want the county to adopt Laura’s Law, which would allows courts to mandate outpatient treatment for the severely mentally ill. Leyba says that law is a key part of his plan to put homeless individuals on the road to stability. “I think we need to transition away from where we allow people to just live in the creeks [and] lay on the sidewalk,” he says. “I think we need to go back to potentially enforcing vagrancy laws. I want to make sure that everybody [who’s] got a problem is on a path toward treatment.”

Leyba also wants the county to re-examine its plans to close Reid-Hillview Airport in East San Jose. In December 2018, the Board of Supervisors voted against accepting grant money from the Federal Aviation Administration that would keep keep the airport open. Instead, the county is studying what to do with the land should the airport close in 2031.

But closing it would take a hit on the county budget and leave people without jobs, Leyba says. To avoid that, he wants to forge partnerships with East San Jose school districts and continue San Jose State’s aviation program at Reid-Hillview for years to come.

“How many poor kids in East San Jose could be training up for a career in aeronautics [or] aviation?” he asks. “We could be doing some sort of proactive partnership between the local school districts and the airport and the airport operations. Instead, we’re already cutting up how we’d lay out the Santana Row east that would go there.” 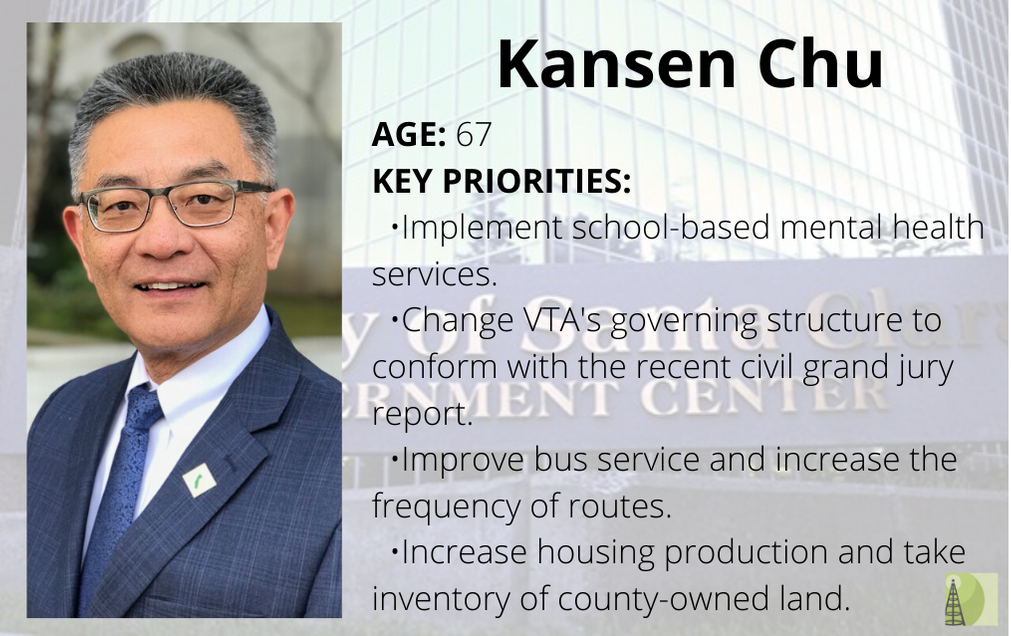 Kansen Chu, 67, wants to come back to the place he’s called home for more than 40 years. The assemblyman, whose current district encompasses parts of San Jose, Santa Clara, Milpitas and Alameda County, decided last year not to run for re-election. Instead, he wants to invest his decades of experience back in the local level of government.

Born in Taiwan, Chu moved to the United States in the 1970s at the age of 23. He says he barely spoke English and arrived with little more than a suitcase full of textbooks.

After settling into his newly adopted country, Chu graduated with a master’s degree in electrical engineering from California State Northridge before taking on what would become an 18-year run as a microprogrammer for IBM.

Chu’s record of public service dates back more than two decades, starting with his election in 2002 to the Berryessa Union School District board. After serving a little more than a term as trustee, he ran for the San Jose City Council, where he represented District 4 from 2007 to 2014. Since then, he’s served in the state Legislature, where he’s been the chair of the Assembly Committee of Health and Human Services.

Chu and his wife and his wife of 44 years, Daisy Chu, raised two children in D4 and now enjoy the company of their two young grandchildren.

Improving public transportation in the region is at the forefront of Chu’s mind, he says. Last year, a Santa Clara County Civil Grand Jury report criticized the Santa Clara Valley Transportation Authority (VTA) for its taxpayer-subsidized fares and a board governing structure that is made up of busy local elected officials.

“I believe that we should have a smaller board, either by election or appointed by supervisors to truly address the transportation issues,” Chu says. “VTA is not just a transit agency, they’re also the congestion management agency.”

The assemblyman added that VTA also needs to “step up to the plate” and improve bus service by aligning it with commuter patterns, increasing route frequency and making the service more reliable overall.

With his experience as the chair of the Assembly Committee of Health and Human Services and a previous member of the Santa Clara County Behavioral Health Board, Chu says he also cares a lot about improving access to health care. On his campaign website, he lists a number of priorities around physical and mental health care, including the implementation of Laura’s Law and increased funding for psychiatric and drug dependency treatments.

“I’m a strong supporter of school-based mental health services because more than 70 percent of the students they need mental health care and don’t have access to it,” he says. 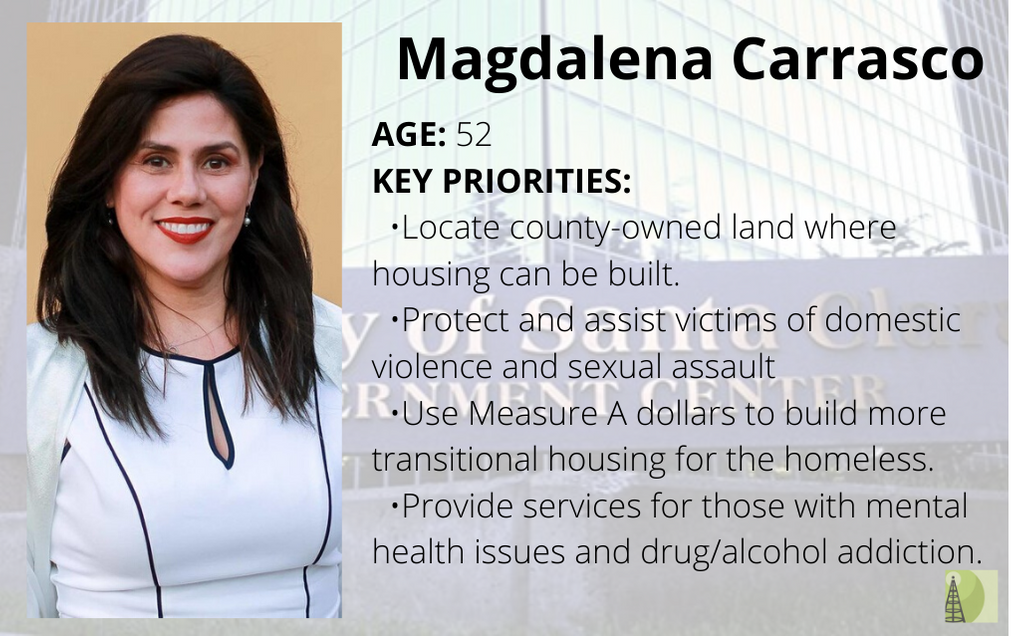 Fifty-two-year old Magdalena Carrasco decided to run for the county seat because she says it’s the “very last safety net” for the region’s most vulnerable families.

As a representative for East San Jose, the D5 councilwoman has had to deal with some of the most serious issues in the city, such as gang violence, poverty and sexual assault. Now, she wants to take her experience—which includes 20 years as a social worker—to fight those issues at the county level.

A San Jose native born to immigrant parents, Carrasco graduated from Independence High and went on to earn her degree in Chicano Studies at the University of California Santa Barbara. After college, the mother-of-four spent 10 years as a social worker for the Santa Clara County Department of Family and Children Services.

In addition to her work with children and families as a social worker, she also served as an advocate with First 5 Santa Clara County. In 2015, Carrasco was elected to the San Jose City Council, where she served as vice mayor from 2017 to 2019.  Carrasco is now in the midst of her second council term, which expires in 2023.

On her campaign website, Carrasco lists a number of ways to make a dent in California’s worsening housing crisis including constructing housing on county-owned land and ensuring the “missing middle,” seniors and the homeless aren’t left out of the conversation. As a councilwoman, she’s advocated to streamline the process for people building backyard cottages—referred to as accessory dwelling units in government jargon—and to protect renters from being evicted and displaced.

Drawing on her experience as a social worker, Carrasco says she hopes to continue the county’s work in protecting women from domestic abuse and gender-based violence. Last year, for example, the county established the Office of Gender-Based Violence Prevention, which will tackle sexual assault, domestic violence and human trafficking. Carrasco says she wants to work alongside Supervisor Cindy Chavez on those issues.

“I want to make sure that women and children are safe in this county and have a place to go when they are in a desperate place and that we provide all the support services that they need so that they can thrive in Silicon Valley,” she says. 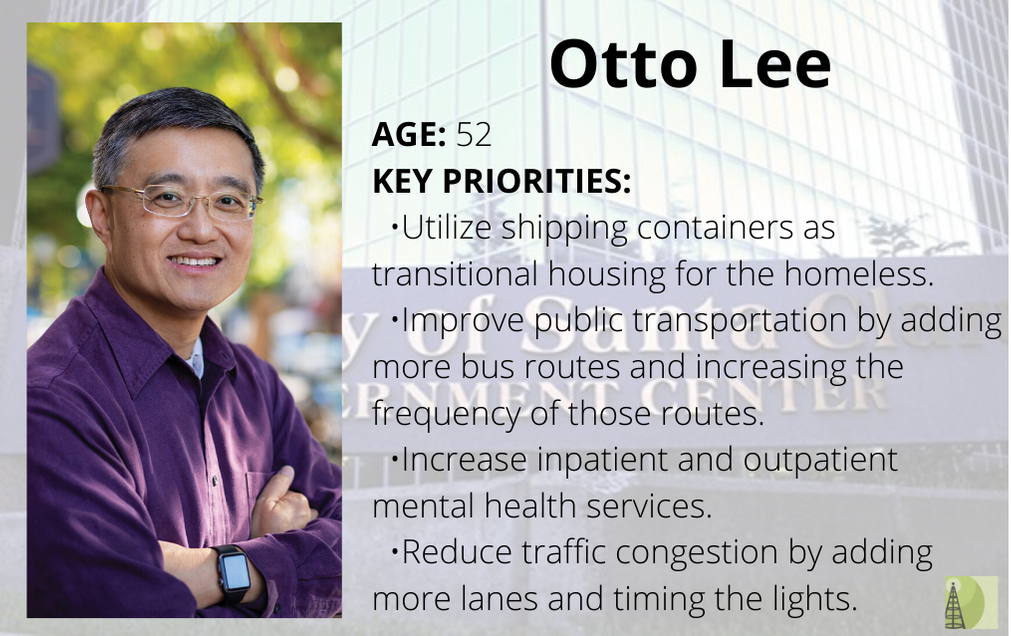 Fifty-two-year-old Otto Lee hopes to make a return to politics after nearly a decade away from local government. A dozen years ago, he made an unsuccessful bid for the District 3 supervisor seat, but says he decided to give it another shot in 2020 because of the many pressing issues in the county.

“I do not believe the resources are being spent very wisely by the county these years, honestly,” he says. "I do think there’s some adjustment we can do.”

Born in Hong Kong, Lee and his family moved to the United States at the age of 15. He graduated from the University of California Berkeley with a degree in chemical and nuclear engineering and eventually went on to earn a law degree from the University of California Hastings. For the past 21 years, he has worked as a patent attorney at a law firm he founded and resides in Sunnyvale with his wife Sally and their three daughters.

Lee served on the Sunnyvale City Council from 2003 to 2011, rotating into the role of mayor in 2006 and 2007 and leading the charge on environmental issues. But his 28 years of service in the U.S. Navy Reserve, is what he says best equips him for public office. In 2008, Lee spent a year in Baghdad, helping coordinate the return of 150,000 troops from Iraq back to the U.S.

That military service, which earned Lee a Bronze Star, has inspired some of his policy platform, he says. To wit: while in Baghdad, he lived in a 40-foot shipping container, which inspired him to think that the county should use them as cost-effective shelters for the homeless. “The hard part is finding a location where to put them,” he concedes. “I do think that the county is willing to identify the locations to put these boxes. It’s not just putting a box that matters, it’s also the wrap-around services that you need to provide.”

Like his opponents, Lee says he believes the county needs to ramp up services for people suffering from mental health issues and drug and alcohol addictions overall.

But he says his signature issue is sustainability.

As mayor of Sunnyvale, Lee was nicknamed the “green mayor” for his staunch environmentalism and advocacy for public transit. As a supervisor, he says he wants to improve public transportation by making it free to seniors and students, creating more bus lines and upping the frequency of those routes.

The county should also look at timing traffic lights better, he says, and building overdue infrastructure to lessen the congestion on expressways.

But he says he’s betting on Chu. “He’s served on the San Jose City Council,” Percival explains. “He has pretty high name recognition.”

It’s notable, Percival adds, that Chu decided to return from state to local government—something he says is pretty rare.

“Chu is one of a bunch of Democrats in Sacramento,” Percival says. “I think he feels like he can make a bigger difference at the county level.”

While Carrasco also is well-known, he says her current council district doesn’t cover much of the supervisor district, which could come at a disadvantage in terms of name recognition. As for Lee, Percival says his absence from the political arena for a long stretch of time could hurt his chances.