San Jose lost one of its passionate advocates with the passing of Joe Noonan Aug 2. A tireless advocate for community organizations and projects, Joe most recently served in a leadership capacity with the Bay Area Furniture Bank, a non-profit that transports and donates surplus furniture to families in need. He was 48. 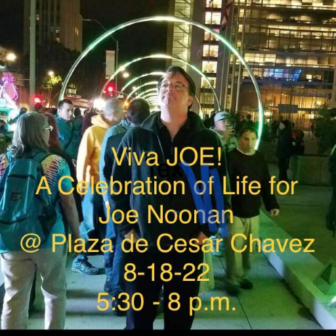 The public is invited to join the Noonan family, Downtown SJ community and friends on Thursday, Aug. 18 from 5:30- 8:30pm for a "Viva Joe" celebration at Plaza de Cesar Chavez in downtown San Jose.

Noonan’s family moved to California from Elmhurst, Illinois in 1987. After working with technology companies, including Navteq, Cisco and JDS Uniphase in the 1990s and aughts, he came downtown to work for Broadway San Jose in 2010 and in 2012 joined the San Jose Downtown Association as its sponsorship manager for four years, contributing to the development of Downtown Ice and Music in the Park.

After that, Noonan held development positions with Christmas in the Park and the City of San Jose, where he promoted the Viva CalleSJ, Viva Parks and San Jose Al Fresco programs. He also managed the historic Twohy Building’s apartments for many years.

On April 26, 2022, after being diagnosed with Stage 4 cancer, Noonan was honored by San Jose Mayor Sam Liccardo with a city proclamation. Liccardo called him “an incredible champion and cheerleader for our community.”

As news of his death spread through the community, accolades were posted to social media. “He spent his time cultivating relationships, connecting people, and caring about his community,” longtime friend Steve Enders wrote. “He was always such a positive, helpful, friendly person,” recalled promoter Bruce Labadie.

Joe was preceded in death by his mother, Jacqueline C. Noonan (Amody) and is survived by his father Joseph F. Noonan; his sister Jennifer N. Smoker, her husband Lonnie, and his nephew Isaac; his uncle Kenneth Noonan, his wife Ruthanne, four cousins and their families.

Friends and family are also welcomed to make donations of any amount to one of two charities Joe Noonan passionately endorsed: Hunger at Home and the Bay Area Furniture Bank.