When Natalia Smut wasn’t commanding a stage at San Jose’s gay bars and clubs, she was often snapping selfies and dishing out compliments to people wherever she went. She was recognizable because of her bodycon dresses, personalized “Smut” choker necklace and her flowing, colorful hair.

But after nights out on the town, the 24-year-old trans woman struggled to find an affordable apartment to rest and recoup in her hometown. She’d grown up in East San Jose since she was 2 years old, but prices were rising. Then Covid-19 cut out most of her income working as a Afro-Latin performer in the South Bay’s small—and at times discriminatory—drag scene.

Smut’s sister, Vanessa Singh, said she finally got a place to call her own place at Hillview Court Apartments in Milpitas a few months ago. Santa Clara County offered the apartment though its part in California’s Project Homekey, which provides long-term housing for homeless or at-risk residents.

“Because she wasn't able to perform anymore, she was just trying to make it until Covid was over,” Singh said. “Natalia was happy. [The apartment] was something for her to start new and she was just looking forward to life and upping her level into the next level.”

That refuge became a crime scene by 2:30am on April 23. Smut’s boyfriend, 22-year-old Elijah Cruz Segura, fatally stabbed her multiple times and then called the police, admitted to being responsible for her injuries and turned himself in, hands still bloodied from the attack. Cruz Segura faces an arraignment in Santa Clara County on Thursday.

As the sun set, the vigil ended in laughter. Microphone in hand, friends took turns regaling a mourning audience with stories of Smut’s proclivity for lip-syncing to Britney Spears hits in pajamas or hijacking cars in Grand Theft Auto. Some remembered the hours she’d spend FaceTiming with people she loved or watching episodes of Bad Girls Club and experimenting with new makeup looks. The stories painted a picture of an energetic woman who dreamt of being a transgender rapper and makeup artist.

“She was too beautiful for this world,” Kiara Ohlde, Smut’s best friend since childhood, said. “She loved and believed in anyone. Even five minutes with her, you knew all of Natalia.”

Smut’s death marked the nation’s 16th homicide of a transgender woman in 2021 and one of four in April alone. She was one of three Black trans women killed this month, the data show. GLAAD reports that transgender women of color often face high rates of poverty, unemployment, and homelessness, due in part to living within a dangerous intersection of transphobia, racism and sexism.

This year’s trend follows a record high in 2020, when at least 44 transgender people were murdered, according to the Human Rights Campaign. Disproportionately, 22 of those were Black trans people, and a majority of the victims were trans people of color. 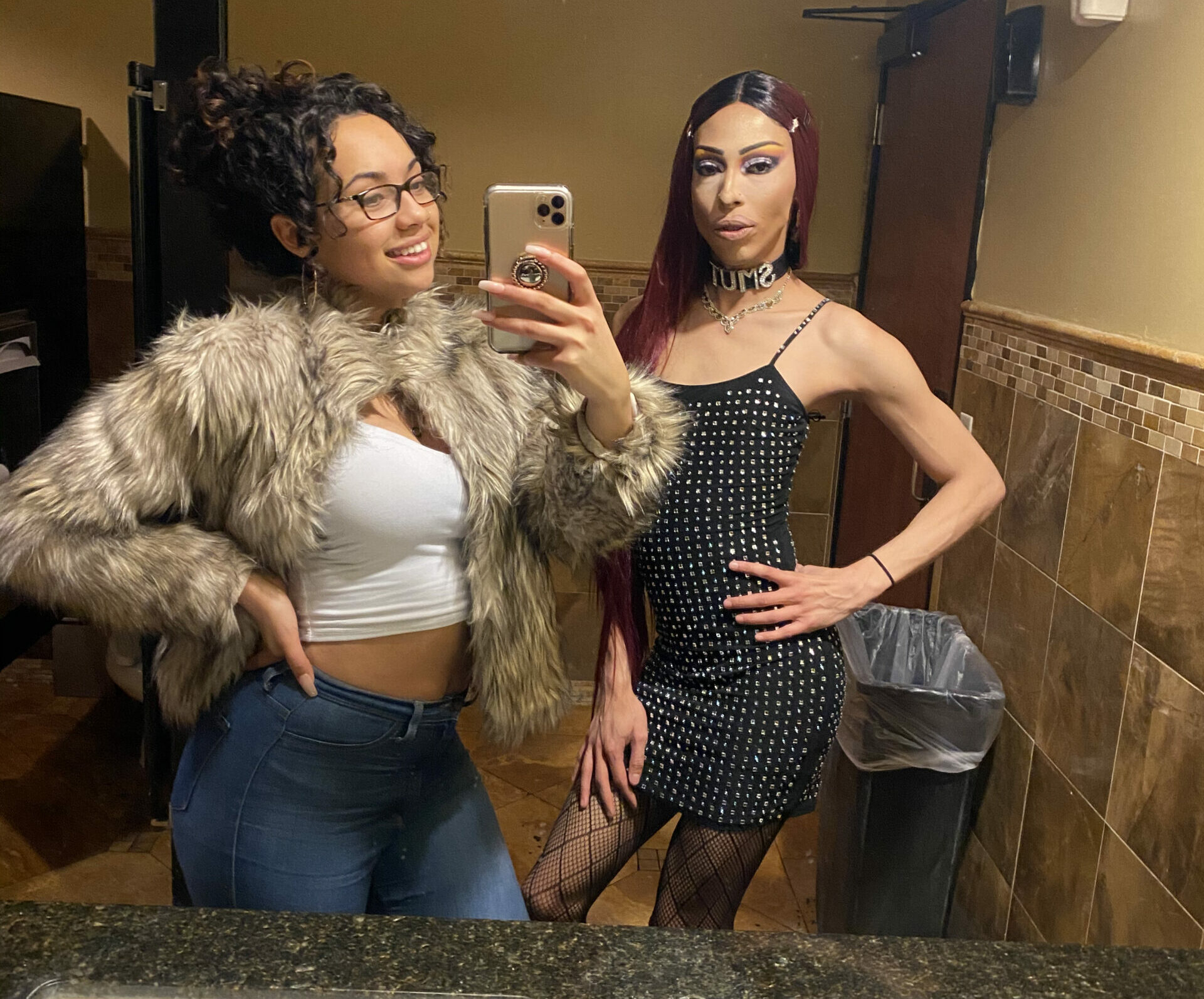 An Emotional Wake up Call

Singh wondered daily if and when she would get a phone call about her sister.

“You brace yourself as best as you can and hope and pray you never do, but I don’t think anyone can physically prepare themselves for this,” she said. “I think she knew, too, how rare and how hard it was for transgender people, let alone being a Black person in this world and having that double-edged sword.”

Smut’s fierceness came through in photos and at clubs, but Singh said she’ll always cherish her sister’s goofy, sweet side that made people laugh and feel loved.

“I think she always wanted everyone to be happy and to see the best of themselves,” Singh said. “A part of me thinks she did it because that's what she wanted; she just wanted someone to love her, accept her and to be ‘her’ to her fullest.”

For the South Bay’s small, tight-knit transgender community, Smut’s death was an emotional wake up call.

“We all have to be very careful, always looking behind our backs,” Vivianet Isabel Castillo, a trans Cupertino resident, said through tears Saturday. “I wonder if maybe this will happen to me, because I am transgender and these things happen to us. We sometimes think Santa Clara County is safe, but now we have to be more concerned with where you’re living and who you’re with.”

Ivy Flores, who performed in the drag community with Smut, said the two women talked about the dangers they faced often.

“She has spoken to me, personally, and told me, ’Us girls, we’re pretty and we have to watch our backs.’” she said. “[Natalia] would always do that for us and defend herself. She was ‘that b*tch.’” 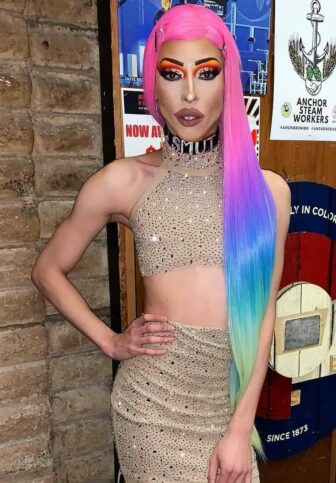 That’s due, at least in part, to a lack of legal protections against discrimination in employment, housing and social services, which increases a person’s vulnerability to intimate partner violence. Between 31% and 50% of trans people face such violence at least once in their life, according to a 2015 report by the Williams Institute, compared to 20% of cisgender people.

Ohlde said Smut just wanted to love and be loved, accepting it wherever she found it, even if people took advantage of her forgiving and compassionate nature.

“She would always tell me how it’s so much harder for her to find a man who wants to be with her and who was comfortable with her,” Ohlde said. “She got stuck in a domestic violence relationship because she just wanted to love somebody who would love her back.”

Compared with cisgender individuals, transgender people were more than twice as likely to experience physical and sexual violence with their intimate partners, the Williams Insitute data show. According to a 2015 report by the Movement Advancement Project and Center for American Progress, trans folks of color are nearly six times as likely to live in poverty compared to cisgender peers, which economically limits the options to escape abusers.

Smut’s death was only 23 days after March 31, the Transgender Day of Remembrance—a day to celebrate trans lives, rather than mourn their deaths—and five months after Kimberly Susan Fial, a transgender woman, homeless person and volunteer, was killed in the stabbing at Grace Baptist Church in San Jose.

Sera Fernando, senior management analyst for the Santa Clara County Office of LGBTQ Affairs, has trouble keeping PowerPoint presentations for trans awareness trainings up-to-date because of the fast-rising number of deaths in the trans community.

“We are at a rate of like one trans murder per week,” said Fernando, who helped arrange Saturday’s vigil. “This is the real truth of what it means to be trans: your life could be over in an instant. The average life expectancy of a Black trans woman is 35. It makes no sense to me.”

Discrimination for trans people is felt across the country, particularly when it comes to finding employment or adequate medical care, Fernando said. That’s true even in “progressive” places like Santa Clara County, which boasts the nation’s first gender health clinic, and California more broadly, where discrimination based on gender identity is prohibited and “transgender panic” defenses are banned in murder trials. 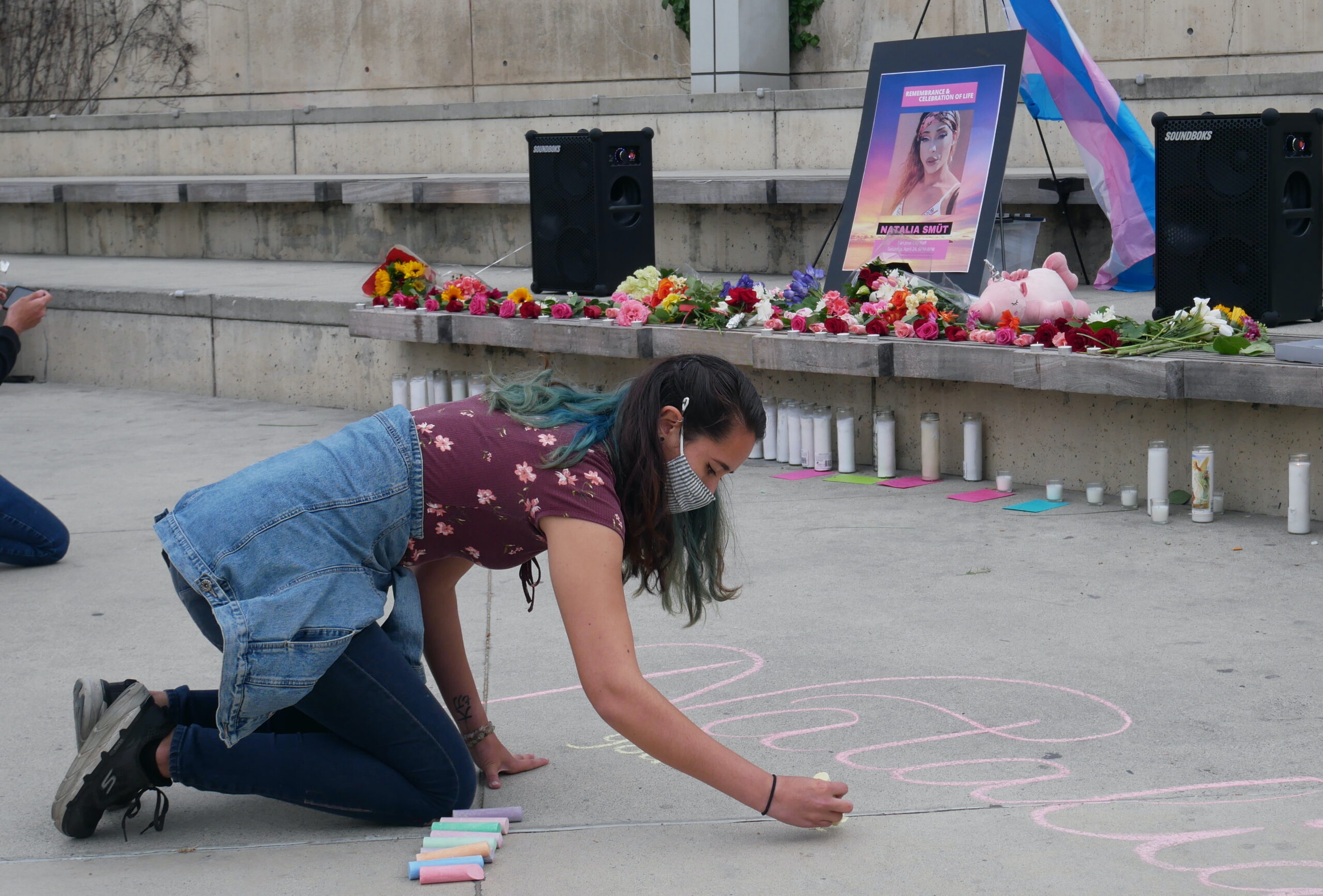 Hope for a better future lives in a surge of attention to discrimination and anti-trans legislation nationally, Fernando said.

In the meantime Fernando feels personally responsible for providing more education across the South Bay about the social and cultural stigmas and traumas trans people feel because of her job at the county.

“This patriarchal system, this place where toxic masculinity still exists, and this whole shame of loving someone that's trans for being themselves, it's hard enough for a trans person to come out,” Fernando said. “If anything, one thing that we could do is raise awareness, education and just get the community to understand where this comes from—again.”

No matter the resources and education, San Jose resident Cordelia Larsen said more protections need to be carved out to foster a sense of belonging among trans people. Smut’s death may have been a shock to some, but the 23-year-old—who is nonbinary, genderqueer and “just hella gay”—said the tragedy is not only a reminder of the pain the LGBTQ community has faced in the past, but also a reminder of the pain they fear and know awaits in the future.

“[Feeling safe is] not just a resource thing,” Larsen said. “It’s a mentality, it’s a cultural shift, and until that shift has truly taken place, we’re never going to be safe. This is a reminder of why we fight so hard now.”

Ohlde and Singh are raising funds in honor of Smut via a GoFundMe campaign to help with funeral expenses, but if any money is left over, they plan to give it to an organization or community center that helps domestic violence victims leave abusive environments.

“My end goal for my sister is to help her keep living on and helping everyone in the future,” Singh said. “I’ve been around domestic violence all my life, I know how it is and the fact that my sister was taken by it, it’s something to be shined a light on. No one deserves to live with that.”