“Truth is the first casualty in war.”

“......while wage negotiations and political campaigns subject the truth to their own unique variety of butt-kicking.”

The last time that police staffing aroused controversy in San Jose, I refused the demands of some protesters to “defund the police” in 2020.  Anti-police protesters responded by painting expletives on my wife’s and my home after one demonstration.  I defied the demands of the protesters for a simple reason: our community wants– and our public safety demands–more police officers. I worked over multiple budgets to save and identify the dollars to expand officer staffing at SJPD by more than 220 officers in the last half-decade, and to increase the police budget by 50% since I became mayor in 2015.

When neighbors helped me clean the graffiti from our home, however, I didn’t expect facts to get wiped away with it.

Last week, San Jose’s police union–known as the San Jose Police Officers Association (POA)– burst on the headlines warning of a “mass exodus” of officers from the SJPD based on their survey of some of their members, purportedly due to the City’s lack of investment in the officer’s compensation.    The next day, County Supervisor Cindy Chavez–-financially backed by the police union in her mayoral campaign–repeated their warnings of doom through robocalls, text messages, and social media.

All of this would be very alarming, of course, if it were true.  So we checked the facts with a non-combatant in these political wars, the City’s Human Resources Department. 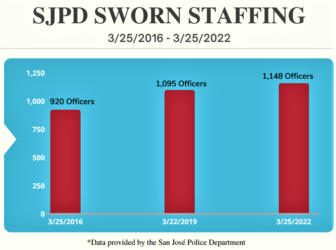 Here’s what we learned, in three bullet points:

So, Why the Scare Tactics – and Why Now?

So, why is the police union and a POA-backed politician scaring residents over a “mass exodus” talk now?  Simply, the police union is negotiating with the City for higher wages in a new police contract.   The City has offered to increase wages by 7% over two years, but the police union’s latest demands include a 14% pay increase, with a $5,000 “cash bonus.”   Obviously, police officers should be compensated well–and they are.   They’re the highest paid group of employees in the City, as noted above, with POA members earning an average salary of more than $189,000.   But we must ensure that we have sufficient taxpayer dollars to hire more officers, and not merely to pay officers more.

In two ways, the police union offers an “alternative universe” of assertions about police staffing, strikingly different from the objective data presented by the City’s Human Resources Department:

First, although the POA admits in writing that the current approximately 3% vacancy rate for “sworn officers is low”, the union claims that the City should define “vacancy” differently.   The POA would like the City to count positions as “vacant” if they are filled by rookie officers undergoing on-the-job supervision with Field Training officers, or if the officers are injured.   To my knowledge, neither San Jose nor any other big city has ever counted “vacancies” in that manner, for some obvious reasons.  First, rookie officers who are working in Field Training are actually making arrests, investigating crimes, and responding to 911 calls.  They’re also collecting a salary.   By any standard definition, that makes their position “full.”   Second, any officer out for two weeks because of, say, a knee injury,  is still collecting a salary with benefits.  If the POA defines such positions as “vacant,” then it follows that the City should go hire somebody else to fill the position.  That logic breaks down on the next step.  Should the City fire all of the rookies and injured officers to avoid paying them a salary?  If not, then the City must pay two salaries for the same position, blowing up the annual budget by several million dollars.  It’s not hard to understand why the POA’s definition of “vacancies” won’t work in any city.

What’s remarkable about the low, approximately 3% vacancy rate at SJPD is the larger economic context: employers in every sector struggle to fill positions amid a historically low unemployment rate, particularly here in the Bay Area.  Every other city department has a far higher vacancy rate, for example.

(2) The Fallacy of Fleeing Officers

Last week, the POA also told any media outlet willing to listen that 206 officers have “departed” the city since January of 2021.   The facts from the City’s Human Resources Department starkly differ: only 37 SJPD officers with at least twenty weeks of experience voluntarily left the Department for other work in that time– about 2% percent of SJPD’s officers per annum, and only 12 of those 37 went to work for another police department, every one of them outside the Bay Area.   Plenty of other officers did leave SJPD since January of 2021–126 to be exact– but for very different reasons.  Specifically, three (3) officers died, fourteen (14) were either fired or resigned in lieu of termination, twenty-one (21) rookies didn’t make it out of 20-week field training, and two demoted to civilian positions within SJPD.  By far, retirement constituted the reason for most of the departures–eighty six (86) in all–but those retirement numbers were fully anticipated by HR.  Why so many retirements?  Officers hired in the 1990’s receive a generous pension that pays 3% of their salary for every year worked, and in many cases, it actually costs the officer more to keep working (and paying into their retirement) than to retire.   All of those 1990’s hires are now coming into retirement age, and to nobody’s surprise, they’re retiring.

To be clear, concurrent with departures come new arrivals; since 2021, SJPD reports that it has hired 208 officers into the Department.  That’s why SJPD’s vacancy is so low.

Additional context seems important : the fact that 37 officers (out of more than 1150, or about 2% per year) chose to leave SJPD since January of 2021 is unremarkable to any employer in the Bay Area familiar with the pandemic-era “Great Resignation” combined with the “Great Exodus” from California’s coastal cities.   Simply, police officers are doing exactly what other Bay Area residents are doing: leaving the area for less expensive communities.  Not a single one of the 12 officers who we’ve identified who left to another department has gone to a Bay Area department, let alone one paying more money.

Taking the Plank Out of Our Own Eyes...

County Supervisor Chavez’s focus on purported staffing SJPD shortfalls seems ironic,  given the multiple reports about far more substantial understaffing at her own County Sheriff’s Department.  This June, her County Sheriff threatened to shut down two County courthouses due to a “staffing crisis” that shrank the number of County deputies from 530 deputy sheriffs in 2019 to only 370 today.

It also comes as the County’s policy of permanently “depopulating the jail”--which Supervisors Chavez and Ellenberg proposed last year– has come under scrutiny amid County’s own data showing that more than 40% of arrestees released pretrial are failing to comply with their release conditions, by committing new offenses or failing to show up for court.  The spinning turnstile at the jailhouse door has overburdened SJPD officers arresting, citing, and rearresting 134 offenders ten times or more—some as many as 30 times–since January of 2020, seemingly without any consequence.   While local judges have abandoned their pandemic-era “zero bail” orders, the County’s continued push to depopulate its jails will continue to have consequences, because since at least 2017, the County has implemented a process of releasing misdemeanor arrestees after booking with mere “jail citations,” without regard for the severity or violence of the arrestee’s prior record.   As County jail populations have dropped dramatically, we’ve seen no surge in the County’s inpatient drug or mental health treatment.   Unsurprisingly, violent crime has increased.   And Supervisor Chavez has voted repeatedly to halt the funding and construction of a new (albeit smaller) jail to replace the Main Jail, in a seemingly blind hope that we’ll embrace a utopian, jail-free future.

Hearing Supervisor Chavez speak out on this issue may also leave some with a case of déjà vu.  About two decades ago, then-Vice Mayor Cindy Chavez and the City Council approved retroactive increases in retirement benefits for police officers and other City employees.  They appointed retirement board members who applied optimistic assumptions and rosy interpretations of the retirement plans’ shaky financial condition.  The POA and other unions backed her in her unsuccessful 2006 mayoral run then, as now, with dollars, volunteers, and campaign muscle.

Two years after Chavez’s departure from the City Council, the City’s Auditor and external analyses revealed that San Jose had incurred billions of dollars of unfunded liabilities for pension and retiree health benefits due to multiple factors, including retroactive benefit expansions and rosy assumptions.  The result: skyrocketing mandatory contributions to the City’s retirement funds forced hundreds of layoffs, a hiring freeze, and severe cuts in city services–including police–for the following decade.  Our taxpayers will shoulder that multi-billion-dollar debt for another decade still, based on the current amortization schedule.  There is good news on the horizon, though: with the passage of Measure F in 2016 and strong fiscal discipline, we have finally turned the corner this year, and the annual retirement cost burdens on our taxpayers have finally begun to drop.

Nonetheless, we cannot forget the lessons of history:  a lack of fiscal discipline by the City Council twenty years ago triggered severe pain for our residents and workforce, from which we have only begun to recover.   We should support our police officers with good salaries, and we do.  Let’s ensure that we have fiscal restraint to stretch our residents’ tax dollars to pay for the expansion of public safety and the many other services that they deserve.

Sam Liccardo is mayor of the City of San Jose.