San Jose Mayor Sam Liccardo rolled out a spending plan that would squirrel away $15.5 million to brace for a $42 million projected budget shortfall over the next four years. Setting aside money in the $3.5 billion budget in the coming months would prevent severe service cuts, according to his proposal unveiled Monday, just a few days after the city released its five-year fiscal forecast.

“With this budget message, we focus on our residents’ highest priorities: improving public safety, expanding affordable housing, confronting homelessness and restoring essential city services,” Liccardo said in a written statement. “With a looming deficit and a fragile financial future, however, we must consider new investments cautiously, with a predisposition to the long view.”

Thanks to cost-saving measures in recent years, the mayor said, the city should be able to close the deficit in 2018-19 and even make some new investments to address homelessness, domestic violence and blight.

Below are some of the one-time investments proposed by the mayor this year.

City Manager David Sykes’ latest fiscal forecast is slightly less pessimistic about future shortfalls than the one issued last spring, and even projects a $10.8 million surplus in the 2022-23 fiscal year because of lower-than-expected pension costs.

Though the city will save money on retirement costs because of a compromise deal it reached with labor unions in 2016, they still take up a greater share of the the budget with each passing year. In 2001-02, pensions cost San Jose $46.3 million and comprised 6.5 percent of the general fund. In the current fiscal year, they amounted to $301.4 million, or nearly 23 percent of the general fund. 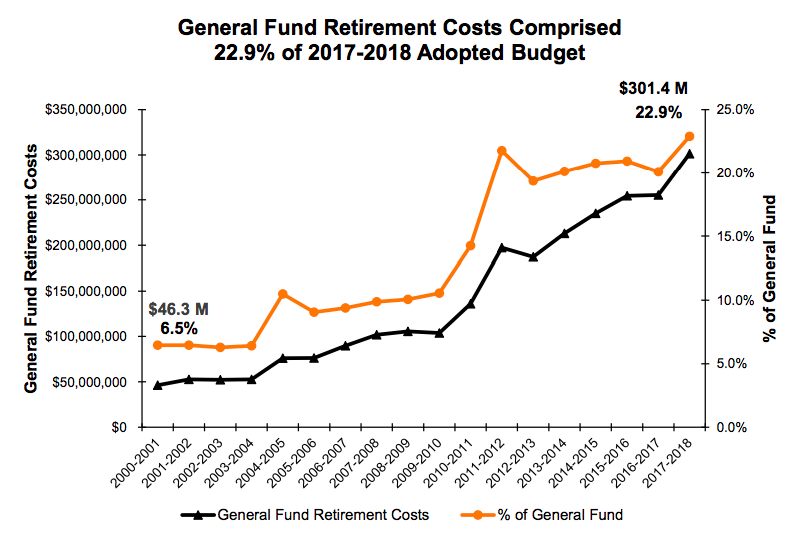 Sykes noted that property and business tax revenue is forecasted to grow in the year ahead, with business tax getting a big boost from cannabis collectives that can now sell to anyone over the age of 21. But revenue is down in a couple other categories, including a $5.1 million annual loss from the SAP Center based on the latest Sharks Sports Entertainment term sheet.

The City Council will vote on the mayor’s budget plan when it meets on March 20. Sykes’ office will then work the council’s directives into a draft spending plan for the 2018-19 fiscal year, which will be released on May 1 and come to a final vote in June.

For more information about the city budget, click here.