The two met within months of each other becoming homeless.

Beverly “Bree” Velasco moved back to San Jose the summer of 2016 with nowhere to live after a job fell through in Las Vegas. John Paulson lost his home when he lost his mom, whose death in July that year sent him on a downward spiral and into the streets.

Velasco began staying at the Boccardo Reception Center, a shelter off of Little Orchard Street, while Paulson spent most nights at the Salvation Army’s Emanuel House a few miles north in Japantown. That fall, they wound up on the same van as part of an outreach that transports people from shelters to churches on Sunday mornings.

“It took him a minute,” she says, “but after making eye contact a couple times, he finally got up the nerve to approach me.”

First, she was struck by his “beautiful green eyes.” But what won her over, she says, were his kind words. “I thought he was very handsome,” Velasco recalls, “and very sweet.”

After dating for a year, they married. Despite being relegated to separate shelters and fighting every now and again about Paulson’s drinking, Velasco says they shared a fierce bond and dreamed of one day starting a life under one roof together.

Those hopes came crashing down with the stabbing at Grace Baptist Church. 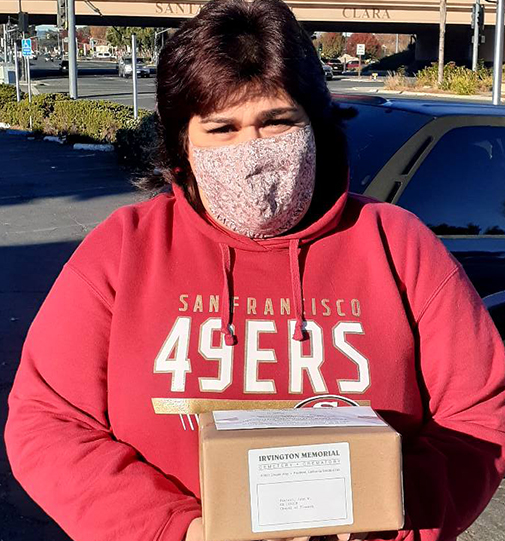 Beverly “Bree” Velasco with the remains of her husband, John Paulson, who was one of two homeless people to die in the Nov. 22 stabbing at Grace Baptist Church.

On the evening of Nov. 22, police say, 32-year-old mentally ill transient Fernando Lopez went on a brutal rampage that wounded three and killed two—including 45-year-old John Wesley Paulson, who came to the downtown shelter that night for a warm meal and place to sleep.

The second fatality was another homeless client: Kimberly Susan Fial, 55, a transgender woman who’d become an exuberant presence since she began staying and volunteering at the facility a few months earlier.

Their stories became known because of the extraordinary violence of their demise, and the fact that it happened in a place where people sought refuge from the perils of street life. As part of the South Bay’s soaring death toll among the unhoused, however, they join a list of names typically relegated to obscurity.

Though somewhat of an outlier in manner and place, the tragedy at Grace Baptist points to the same dangers driving the 122 percent jump in homeless deaths Santa Clara County has seen so far in 2020 compared to all of last year.

“It speaks to how people aren’t getting enough healthcare and how they’re all fighting for, like, 10 detox beds,” says Shaunn Cartwright, founder of the Unhoused Response Group and a regular presence at Grace Baptist. “It speaks to the fact that people have nowhere to go and they’re fighting for less shelter space.”

After a years-long ascent, deaths among the unhoused skyrocketed during the first nine months of 2020, according to coroner data—rising by 40 percent and 33 percent in Alameda and Santa Clara counties, respectively.

A small share of those fatalities owed to Covid-19. Far more stem from chronic illness such as diabetes, drug overdoses, exposure and ailments worsened by lack of healthcare. A growing number, at least in San Jose, involve suicide and homicide.

Like many people on the streets, Paulson carried a knife for his own protection. But friends say his affability generally proved a better defense.

“He was a cool guy,” recalls John Rodarte, who spent most of his formative years under the same roof as Paulson. “He was just so easy to talk to.”

Called “J Dubb” or “JW” by his inner circle, Paulson never fell out of touch with his childhood friends—even after lapsing into homelessness. Rodarte says he started out as a neighbor but became family by moving in after his dad’s death in 1989, when Paulson’s mother took him in as her own.

“We’re not brother-brothers, we’re friend-brothers,” Rodarte says. “We had the same first name, were born in the same year and had birthdays a month apart—his on March 13, mine Feb. 10. His mom was basically my mom.”

They grew up in San Jose’s South Side, in a neighborhood off Blossom Hill Road and Almaden Boulevard known by locals and authorities alike as “The Crime Zone.” With a core group of about 20 kids, J Dubb and Rodarte would spend their days fishing at Valley Water’s percolation ponds, swimming in the local public pool, playing football and waging pellet gun wars in the nearby hillsides.

On a recent afternoon, about two weeks after J Dubb’s death, a handful of his lifelong pals—cousin Jeramie Bryan, friends Herbert Mah and Alex Escobedo—convened at Tucson and Calsbad drives, one of their old haunts, to reminisce.

“Those memories will never be forgotten,” says Jeramie Bryan, J Dubb’s cousin. “He was a good guy, had his ups and downs after losing his mom, but he always made us laugh. He loved his music and car collection, always dressed sharp. He loved his wife.”

On Dec. 1, when Grace Baptist Church held a candlelight vigil to honor the lives lost nine days earlier, that same cadre of J Dubb’s friends showed up to mourn his passing and comfort his widow. Rodarte, who lives in Oregon, couldn’t make it. Instead, he says he’s been trying to process his grief by going through old photos of Paulson and clips of the cameos from some of the rap videos they worked on together.

Velasco—who spent the ensuing two weeks quarantined in a hotel room after potential Covid-19 exposure at the shelter—has been going through old photos, too, trying to remember Paulson as he lived to cope with the way he died.

Except for the vigil, one of Velasco’s only forays outside has been to the morgue, where she confirmed Paulson’s identity in part by pointing to her nickname tattooed on the back of his neck. The other, a trip to Irvington Memorial Crematory in Fremont to retrieve a brown-papered box containing his ashes.

Next month, for her 50th birthday, Velasco says she wants to ink Paulson’s name on her own skin. She has yet to figure out where, exactly to lay him to rest, and whether enough donations will trickle in through a fundraiser by friends and another through Grace Baptist to cover the costs of a proper burial.

There’s at least one more place Paulson’s name will appear in the coming weeks. 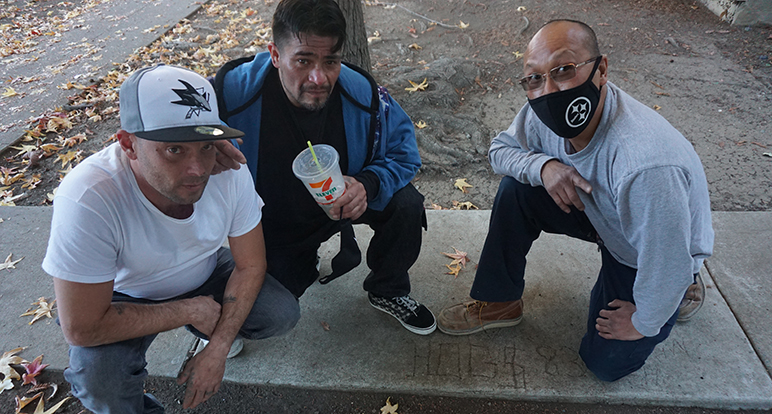 Jeramie Bryan, Alex Escobedo and Herbert Mah (from left)—all friends of the late John Paulson—reminisce about their childhood friend by a concrete inscription of their childhood crew: The Hoffman Old School Gangsters. (Photo by Jennifer Wadsworth)

Come Dec. 21—the longest, darkest night of the year—the Silicon Valley Interreligious Council will place those markers in front of the County Government Center as part of an annual memorial for the unhoused.

Many of the deceased named in the somber display will end up scattered at sea, their remains unclaimed and identities all but forgotten. Had Fial and Paulson died almost anywhere else, that might have held true for them, too—as it has for homeless victims of a slew of other homicides to plague San Jose in recent months.

“For quite a few people on that list, the cause of death is some kind of violence,” says Andrew Bear, a pastor who launched the annual homeless memorial seven years ago. “When people are out on the streets, they’re more exposed to those risks.”

Bear says he hopes any sympathy sparked by the Grace Baptist tragedy will extend to the scores of others who shared Fial’s and Paulson’s struggle with homelessness.

“By calling attention to the fact that so many individuals are dying without homes,” he says, “I hope people can find it in their hearts to find meaningful solutions to homelessness in our community.”