Scuttlebutt among San Jose’s downtown dwellers has centered on whether the city core’s largest grocer, Safeway, will fold after losing its validated parking hook-up under “The 88” high-rise. Concerned patrons have bombarded District 3 Councilman Raul Peralez’s office with queries over the store’s fate, but City Hall has no control over the price of parking ever since MVP Realty outbid the city with a $3.6 million offer for the adjacent 330-space garage, which San Jose’s Redevelopment Agency (RDA) funded for $12.5 million just before the real estate bubble burst in 2009. Richard Keit, head of the successor agency tasked with selling off RDA assets to pay back the state, says the city had three chances to avoid losing the garage—granted, the last two were long shots. But had San Jose kept the lot, it would have preserved a two-free-hours validation deal that accounts for 75 percent of parkers and reportedly keeps the attached Safeway afloat. The city could have claimed the garage for a steal last year when an appraisal put the site’s value at $850,000. But the successor agency’s oversight board, in a charge led by retired Santa Clara County finance exec John Guthrie, called the estimation dubiously low and demanded a second opinion. That next appraiser pegged the value at a staggering $13 million—impossibly over the city’s budget and a sum Keit calls “ridiculous” and “absurd.” The last-resort option, per Mayor Sam Liccardo’s spokesman David Low, was to put the garage up for an open bid. San Jose’s $1.5 million pitch stood zero chance against MVP’s. While the successor agency rid itself of a $7,000-a-month moneysuck, the sale could spell the end of downtown’s flagship grocer. And this is after the city helped Safeway build the garage, which led to the demise of the Zanotto’s grocery store—also funded with RDA money—in 2011.

Below is a list of bidders and the amount offered by each one. 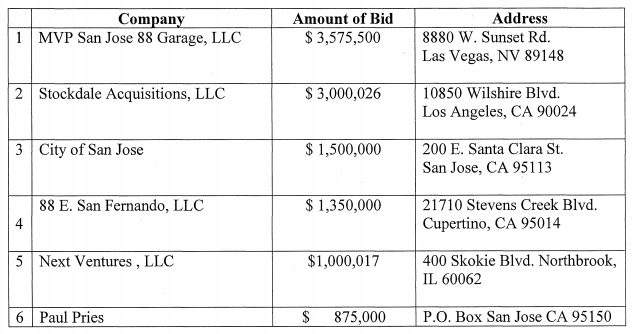