Labor advocates met outside the U.S. Department of Labor’s San Jose office in June to call attention to a new study showing how the proposed Trans-Pacific Partnership trade pact threatens California jobs in manufacturing, the service sector and agriculture.

The press conference took place in front of a 8-by-16-foot silhouette of an unemployment line emblazoned with the names of people laid off by 10,000 recent trade-related plant closures and downsizings. Against that visual backdrop, organizers called on Silicon Valley congressmen to oppose the trade deal, commonly called TPP.

“The Trans-Pacific Partnership has been exposed as a rigged agreement that will benefit nobody but the CEOs of giant multinational corporations,” said Charlotte Casey, a retired autoworker and member of the San Jose Peace and Justice Center. “Fortunately, the public is learning the truth about this secret deal that would impact every aspect of our lives, and we are determined to stop it.”

This new government report, available here, highlights just how damaging the proposed trade agreement would be for jobs and wages. Californians cannot afford another job-killing trade deal, and look to Congress to defeat the TPP once and for all.

For years, the partnership was negotiated behind closed doors with the aid of literally hundreds of corporate advisors, while the public and press were barred from even reviewing what was being proposed in our names. Now that the final text has finally been revealed, it’s clear why negotiators wanted to hide it from the public for so long: The TPP is a pact designed to benefit corporate elites at the expense of working families.

The government body that studies proposed trade agreements—the U.S. International Trade Commission (ITC)—just published its official findings on the TPP.  These findings reveal a losing deal for most Californians.

What’s more, most of what U.S. service-sector benefits are projected for the TPP aren’t from U.S.-based employees providing services cross-border, but rather from sales by U.S. companies’ foreign-owned affiliates. That means profits for transnational corporations, but fewer jobs for California workers.

While agriculture was more of a mixed bag in the study—with some commodities gaining and some (including rice, soybeans and corn) losing out—the worsening trade balance in manufacturing, natural resources and services was five times higher than projected agricultural gains.

Other troubling findings in the ITC report include that the TPP would provide almost no gains for U.S. economic growth (only 0.15 percent by 2032), while increasing the overall national trade deficit.

Because the agency employs a model that incorporates unrealistic assumptions, such as constant full employment and no currency manipulation, past projections have systematically overstated the benefits of trade pacts relative to their outcomes. That the ITC is projecting such minuscule benefits and serious risks from the TPP is a definite cause for concern.

The TPP is branded as a “free trade” deal, but in reality it contains hundreds of pages of new rights and privileges for transnational corporations, including foreign investor protections that make it easier for corporations to exploit low-wage workers in countries like Vietnam making just 65 cents per hour.

The TPP was signed in February, but has not yet been submitted to Congress for a vote. It is widely expected to be considered by Congress later this year, most likely during the post-election “lame duck” session when voting for controversial legislation holds less political risk.

Presidential candidates Hillary Clinton and Donald Trump have both criticized the TPP as bad for American jobs, and have said it should not be approved by Congress.

Silicon Valley Rep. Zoe Lofgren (D-San Jose), however, has said she is still undecided on the TPP. With this new study in hand, it’s time for her to join other Democrats, labor unions, environmental groups and others in speaking out publicly against the TPP.

Aaron Lehmer-Chang is California director of Citizens Trade Campaign, a national coalition of environmental, labor, consumer, family farm, religious, and other civil society groups founded in 1992 to oppose the North American Free Trade Agreement. The opinions expressed in this article are the author’s own and do not necessarily reflect those of San Jose Inside. 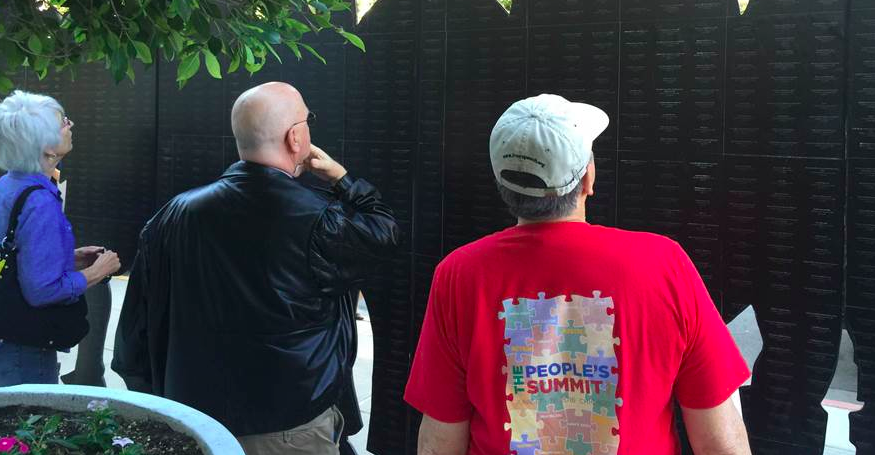 Passersby at a San Jose protest read names of people laid off in recent factory closures and downsizings.