Developers scrambling to finance high-rise apartments in San Jose will get a break on taxes for at least a few more years.

The San Jose City Council voted Tuesday to extend an incentive that gives builders a break on 50-percent-of construction taxes and a pass on a $18.26-a-square-foot affordable housing fee–as long as they meet certain criteria. Now, developers have until the end of 2023 to get their projects move-in ready.

But the decision didn’t come without a fight.

Councilors were split in a six-to-five vote, with disagreements over whether all nine projects currently in the pipeline should receive the tax break. Council members Sergio Jimenez, Raul Peralez, Magdalena Carrasco, Maya Esparza and Sylvia Arenas cast the opposing votes. 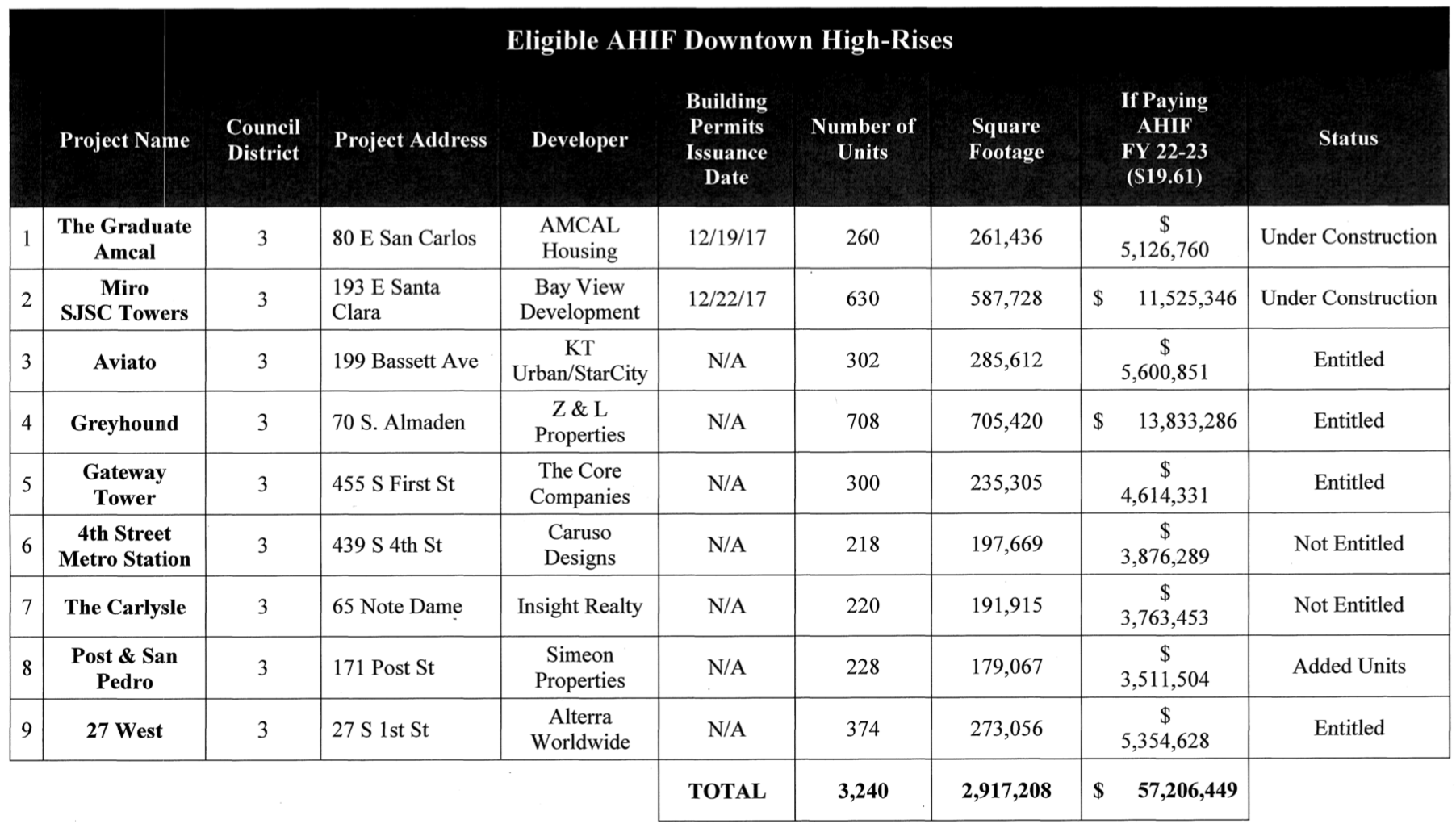 Nine developers stand to gain a combined $57 million in subsidies if the program gets re-upped for another few years.

Peralez, who represents downtown, led the charge on the losing side. From the dais, he cited concerns over a study which found that high-rise construction in the city’s core just isn’t financially viable right now.

The D3 councilperson wanted to exempt two types of projects–co-living developments and high-rises with a certain parking ratio–from the tax break unless they comply with San Jose’s workforce standards. Those standards, which the city enacted earlier this year, require developers that benefit from a city subsidy to pay prevailing wage and meet a certain threshold for local hires. However, the rules only apply when a fee reduction is issued across a certain subcategory of use. That means the tax break would have to be for all high rises developments, not just some of them.

But after a council decision earlier this year, the “dorms for adults” concept became a subcategory of its own under San Jose’s building code. Peralez says that means co-living developers shouldn’t be exempt from doling out prevailing wages because the projects are classified in a different subcategory.

“The [analyst] looked at all downtown high-rise projects under one big umbrella,” Peralez told San Jose Inside.

The council representative also wasn’t convinced that low parking ratios are a deal-breaker, especially since the city advocates for less car-centric developments. Reducing parking by half could save up to $24 million for some projects, according to Peralez’s estimates. He unsuccessfully pushed to have the analyst review the feasibility of building co-living developments or projects with low parking ratios.

Peralez told me earlier he would support fee reductions on 7/9 projects in the pipeline. The 2 other fall into the aforementioned project types. At the bare minimum he wants the consultant to reanalyze co-living projects & developments w/ low parking ratio and its feasibility.

Leading the charge from the other side, Mayor Sam Liccardo disputed his colleague’s logic and said Peralez was “cherrypicking” which projects should be subject to the labor standards or receive the fee reduction.

“It’s not up to me to decide which projects work, it’s up to the market,” Liccardo told San Jose Inside. “What the market has told us is that none of those projects will work because we haven’t seen a shovel hit the ground in nearly two years despite the biggest building boom in Silicon Valley’s history.”

But Councilman Johnny Khamis wanted to go bolder and cut the fees permanently. In a proposal he authored with Councilwoman Dev Davis, the pair called for the city to create a tax break for mid-rise development near transit corridors where high-rises were barred by San Jose’s 2040 General Plan.

“That is the way to spur development,” he said. “We really need to take a look at the fees involved. It’s responsible for driving up the cost of living in this area.”

Khamis adds that the council is going to have to sit through his 15 minute speech again in the future about cutting fees.

Khamis and Davis, however, didn’t have the votes.

Jimenez questioned how long the city would need to cut taxes for developers. More than a decade ago then-Councilwoman Cindy Chavez and former Mayor Chuck Reed—polar opposites on the labor-business political spectrum—pushed the fee reduction. Jimenez said that was during the “worst of times.” Now in what he considered “the best of times,” San Jose was still making exceptions.

“Does the city have a responsibility to ensure developers are making a sufficient profit?” he questioned.

Councilman Lan Diep later responded to Jimenez’s inquiry, saying that the city’s responsibility was to “our citizens.” That means doing what they can to get housing built.

“We have a plan and a vision to build a vibrant San Jose,” Diep said. “That won’t be feasible until we get the critical density in our city.”

December 2016 marked the last extension of the policy before this one. And, at the time, six members of the current council joined a unanimous vote of approval: Liccardo, Peralez, Jimenez, Khamis, Carrasco and Chappie Jones. Carrasco on Tuesday said she wasn’t ultimately able to support it the second time around.

“I thought it was worth the effort to stir economic vitality, especially in the core of San Jose,” Carrasco said of her last decision. “[Now we need to] provide for families those good pay jobs that guarantee them to stay in the city that they love and work.”

The issue has widened the divide between labor and business factions, as evidenced by shots fired by political foes in dueling press conferences late last week.

In the days leading up to Tuesday’s vote, Silicon Valley Rising–a union coalition led by the South Bay Labor Council and nonprofit think tank Working Partnerships–accused business-friendly Liccardo of backing the tax break to boost profits for developers that support his political ambitions.

#SanJosé City Council votes 6-5 for a $67 million subsidy to 9 developers just to increase their profits. #Indefensible

Meanwhile, business boosters such as the Silicon Valley Organization, Silicon Valley Leadership Group and the Santa Clara County Association of Realtors shot back, calling the attack a calculated hit. They charged labor leaders with trying to drum up controversy to raise the profile of a 2o20 ballot measure that would bar certain developers and lobbyists from donating to campaigns for city office.