San Jose gave the green light to what city officials are calling the largest development investment in the history of downtown.

The City Council on Tuesday approved the $600 million project by Trammell Crow and Bentall Kennedy, which will bring an enormous office-apartment-retail campus to San Jose's nascent Diridon district.

The project sits on eight-plus acres by the Guadalupe River Park and Los Gatos trails and a short walk from the SAP Center. It’s also close to Mineta International Airport and the Diridon Station, a hub for Caltrain, ACE, VTA and Amtrak (and, in the future, BART and high-speed rail).

Trammell bought the land from Adobe Systems last fall for about $58.5 million with plans to build the first major mixed-use complex west of Highway 87. The proposal includes 960,000 square feet of office space, 30,000 square feet of retail and 325 apartment units—all in a cluster of 10- to 13-story towers.

Because the property encompasses the historic San Jose Water Company, the developers plan to renovate the building to preserve it as a landmark. 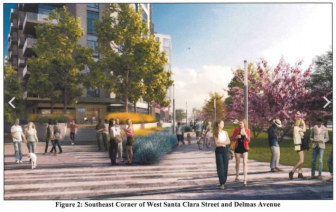 “[The project] marks the maiden voyage of development into the Diridon area,” he said, “where by 2025, we’ll see the most active multi-modal transit station west of the Mississippi.”

Artist renderings show a residential building across from two office-retail towers encased in glass. The design of the office towers in particular drew some backlash over environmental concerns. 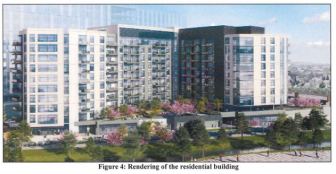 Putting a large glass building at the confluence of two waterways puts it smack in the middle of a riparian habitat, downtown resident Elaine Gould wrote in one of dozens of letters to the council addressing bird safety.

“I think it would be very disturbing to work in an environment where one has to watch birds constantly flying into the windows and littering the ground below,” Gould wrote. “Surely San Jose could do better than that.”

Shani Kleinhaus, an environmental advocate for the Santa Clara Valley Audobon Society, echoed those concerns in a Mercury News op-ed earlier this month.

Developers expect to break ground on the million-square-foot project this fall and have the site ready for occupancy by late 2018. To view the details, here’s a link to the council memo and development proposal.