Adobe broke ground on its North Tower on Monday, kicking off construction of the 700,000-square-foot all-electric addition to its downtown campus. At build-out, the company expects the structure to accommodate another 4,000 workers.

“The decision to have an entirely electric powered building is critically important to our city,” Liccardo said. “Since the city of San Jose launched San Jose Clean Energy this year—a minimum 45 percent of energy provided to our residents will be renewable.”

In February, San Jose switched electricity provider from PG&E to San Jose Clean Energy to increase users’ access to emission-free electricity. And Liccardo hopes that the North Tower will inspire other business leaders to recognize the importance of clean power. 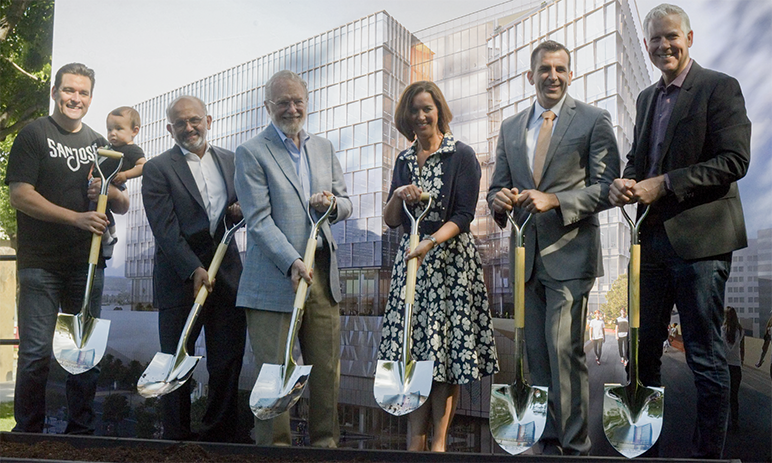 Liccardo said Adobe has special standing in San Jose by helping transform downtown into an urban center. When it moved into the heart of the city in the mid 1990s, he said the company broke the mold of the closed-off office campus typical in Silicon Valley at the time. “Adobe has led the way for other companies,” Liccardo said. “We now have more than 180 tech companies here in downtown San Jose. Who would have thought that would have been possible a decade ago or two decades ago?”

Adobe officials waxed nostalgic Monday about how far the company has come since its humble beginnings when co founders John Warnock and Charles Geschke launched it out of Warnock’s garage. “Our first office in Mountain View was 3,000 square feet, and we had about a dozen employees in that office,” Warnock said.

Adobe grew exponentially with the launch of flagship products like Photoshop, PDFs and Illustrator, outgrowing its office in Mountain View. When Warnock and Geschke set their eyes on relocating to San Jose, Adobe became the first major tech company to invest in San Jose’s real estate. “It was Jon and Chuck’s vision that put Adobe on the map in the business world,” Narayen said. “It was also their vision that put Adobe in San Jose.”

Adobe plans to complete the construction of the North Tower by 2022. A pedestrian bridge will connect the new building with the existing campus. 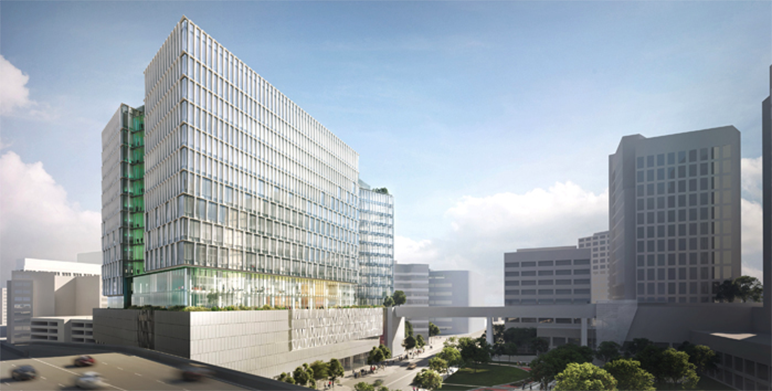