A darkened photo of San Jose Councilwoman Sylvia Arenas has been removed from a Silicon Valley Organization (SVO) PAC website after being denounced as a “racist attack.”

The website—sylviaarenasselfservice.com—links to a recent Mercury News endorsement of Zito. Before public outcry prompted the SVO to remove them, two photos were featured as well, with a big green check mark next to one of Zito.

The photograph of Arenas, however, seemed visibly altered to make her skin look much darker than it actually is.

Arenas’s campaign decried the portrayal as racist. Her allies also noted that this wasn’t the first time SVO’s political advocacy arm was accused of stoking xenophobic sentiment against Latino candidates. 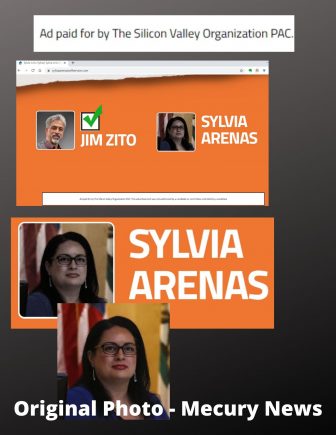 “We are shocked to learn that the SVO is again making ads that darken the skin tone of a Latino candidate, like they did against Sergio Jimenez in 2016,” Patrick McGarrity, a policy aide and campaign spokesman for Arenas, told reporters in a written statement. “This kind of insidious racism is designed to seep in and have its rhetorical effect, while protecting its practitioners from backlash. But it will not work. Evergreen and San Jose voters will not stand for these tactics any longer.”

Arenas’s campaign also called on Zito to “disavow the ad.”

In an interview, Zito called the photo “inappropriate.” He said he had no knowledge of the image before it was posted and that he’s glad it was taken down.

Jimenez, who endorsed Arenas’s re-election bid, told San Jose Inside that what the PAC did to them both was “inappropriate.” During his first run for office, the same group not only darkened a photo of him, but added police lights in the background.

“I think it’s unfortunate that folks stoop to that level and we need to do better than that,” he said. “Unfortunately, the SVO knows that there is a struggle to keep the majority on the council and they’ll do everything they need to do to get certain folks out of office.”

Eddie Truong, SVO’s director of government relations, chalked up the incident to an error by Chariot Campaigns, one of the PAC’s consultants. He said a “newsprint effect” was accidentally applied to the photo, which made Arenas appear unusually dark.

“We directed our consultant to use all photos of Sylvia Arenas in their normal format and without any alteration,” Truong offered by way of a written explanation. “Unfortunately, this was done for all photos except for one, which is the microsite. Once this issue was brought to our attention, we immediately corrected it.”

When asked if the PAC would sever ties with the consultant over the misstep, Truong said that’s unlikely because he believes it was an “isolated incident.”

San Jose-Silicon Valley NAACP President Rev. Jethroe Moore III called the online ad “disturbing,” and criticized the SVO for deploying what he described as “Jim Crow era tactics.” He also urged Zito to return any funding he received from the PAC.

William Armaline, director of the Human Rights Program at San Jose State, described the photo-darkening tactic as a tired play out of the “right wing playbook.”

In fact, he said, it’s common enough to have a name: colorism.

“In a case like this, the idea would be [to] make sure people understand that [Arenas] is a Latinx woman,” he explained.

Anger over the ad extended beyond Arenas’s camp, making waves and social media and throughout the Evergreen community, which makes up most of District 8.

“This is not who we should be and certainly not who we aspire to be here in Santa Clara County,” he said. “As a teacher, trustee, and human being, I reject this overt racism and demand an immediate retraction. Those responsible must be held accountable.”

The SVO PAC has faced blowback for more than the just the darkened images.

During the 2018 election, the committee sent out a mailer with a photo of District 9 council candidate Kalen Gallager that was cropped to make it look like he was flipping off the camera. At the time, Truong defended the mailer, but told San Jose Inside today that the SVO eventually fired the consultant that edited the photo.