Depending who one asks, San Jose’s commercial linkage fee is coming up for a vote either too early or way too late. But ready or not, city officials are expected to make a decision about the divisive fee this evening.

For the uninitiated, the linkage fee would increase the cost for commercial developments—offices, warehouses, hotels and retail shops—and use the proceeds to fund badly needed affordable housing in the city.

Elected officials are on board with adding a fee to offset the impact commercial developments have on housing demand. The question is: how much is too much? That’s the part no one seems to agree on.

“There’s an impact, obviously, with job growth and we know … [development] creates greater demand for housing, which drives up rents, and we want to address that concern,” Mayor Sam Liccardo told residents in a livestream Monday.

But Liccardo said he’s also worried about the pandemic-caused economic downturn facing the city, which he estimates could take a year or more to fully recover from. That’s bad news in a city already feeling downward pressure on its budget because it has more homes than jobs—the opposite problem of most Bay Area cities.

“We have a serious economic challenge in our city, like every city in the country right now,” Liccardo said. “The last thing we want to do is impose fees that are going to prevent the development of job-producing sites.”

The decision, set to come before the City Council for a vote this evening, comes as San Jose faces a looming deficit and unpredictable recession due to Covid-19. Those opposed to the fee say the timing is wrong to add potentially killer costs to economy-boosting projects, especially because some of the highest proposed fees are in the city’s downtown.

“We’ve spent the last 20 years trying to make the downtown the focus of our economic development and we’re going to tax downtown office construction at a higher rate than the rest of the city?” Shawn Milligan, a partner at developer KT Urban, said.

But San Jose also has a booming pipeline of real estate proposals by developers that so far seem undeterred by the squishy market ahead. Proponents of the fee say that proves developers can absorb the costs in the city, where most leaders and its biggest developers say the long term outlook is bright.

“We have as much Class A office that’s being planned as all the rest of Santa Clara County combined at this moment,” said Jeffrey Buchanan, public policy director at Working Partnerships USA, a local think tank. “San Jose is becoming a center of development interest and there's nothing to tell us that post-Covid any of that's going to change.”

It may be contentious to get to the final numbers.

KMA prepared two documents to aid the city in its decision.

One, known as a nexus study, analyzed the full cost of the housing demand various types of commercial developments create in the city. The results were astronomical.

For instance, office space developers would pay nearly $138 per square foot to mitigate the housing need created by the project, according to the report. For a 100,000-square-foot project, that would amount to nearly $14.4 million in affordable housing fees alone. Many of the office developments in the city are 10 times that size.

Results from the KMA  "nexus" study, which analyzed the impact on housing need each development type costs.

Meanwhile, brick-and-mortar retail developers—an industry already limping along in the age of Amazon.com—would pay the most, at nearly $177 per square foot. The reasoning, according to KMA, is that jobs created by retailers typically don’t pay enough for employees to pay the sky-high market-rate home prices in the region. That means housing would need subsidies to make it affordable to those workers.

Then came the second KMA report, known as the feasibility study, which analyzed how much commercial developers could actually pay in San Jose without killing every project.

In the city’s downtown, where most of San Jose’s largest projects are proposed, developers could, in theory, pay between $25 and 30 per square foot of office development, the report estimates. The costs across the city vary based on where the project is proposed and the type of development. 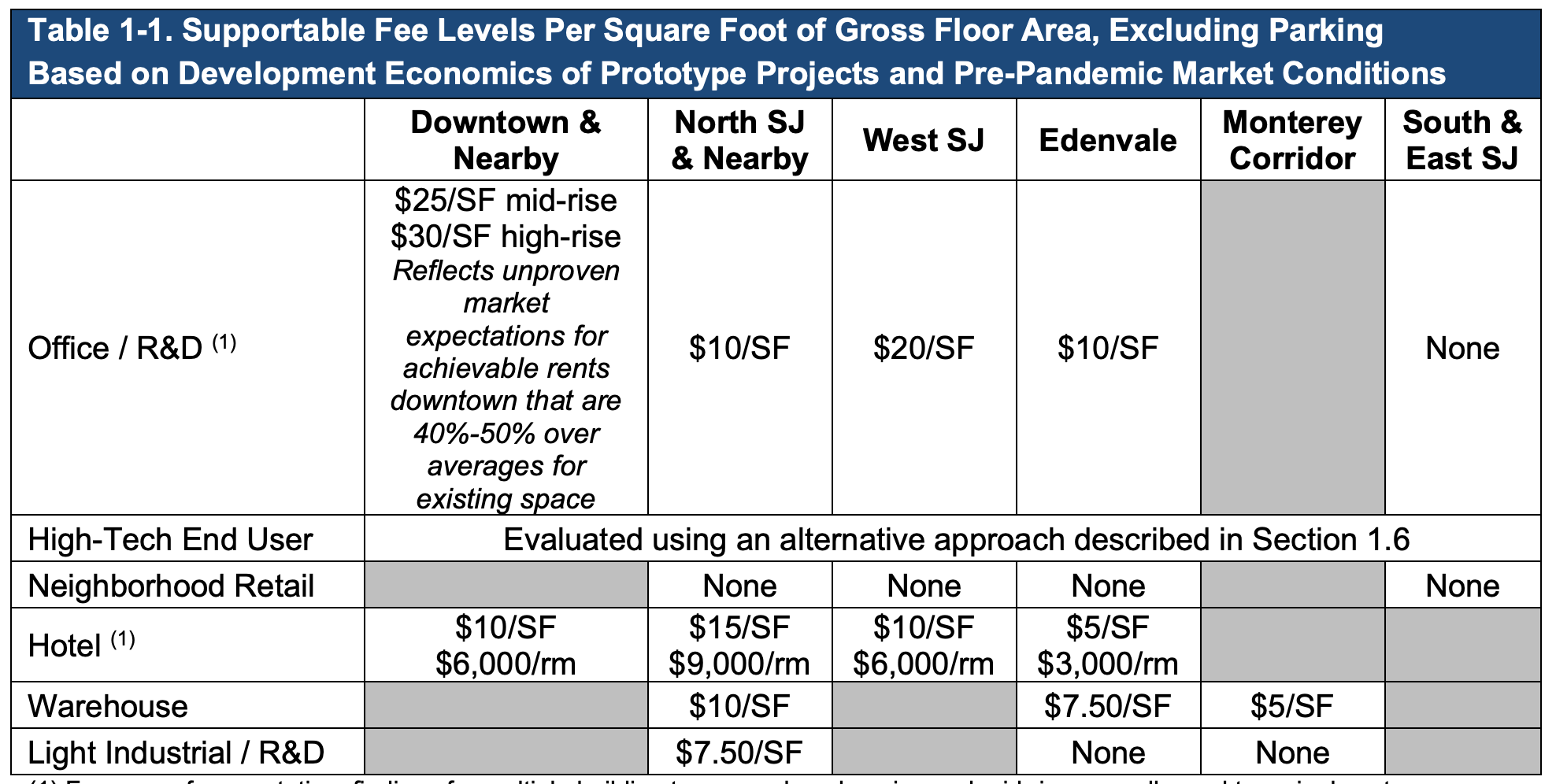 Keyser Marston Associates' recommendations from its "feasibility" study, which analyzes how much developers may be able to pay for commercial linkage fees in San Jose

The studies were done ahead of the coronavirus pandemic, and re-analyzed later, but the consultant didn’t budge much on the numbers. Developments are long-term visions and San Jose’s future still looks good, KMA concluded.

But those numbers come with a caveat: they assume brand-new offices in the urban core will fetch rents 40 to 50 percent higher than downtown offices do today. “These findings have a higher degree of uncertainty and sensitivity in that they reflect unproven market expectations,” the feasibility report states.

City officials say the uncertainty in the reports mean the conversation of the commercial linkage fee will likely return sooner than later.

“Typically we would have probably said we’d do an update in about five years, but in the context of Covid, we’re going to have to update a bit sooner than that, depending on how everything pans out,” Chris Burton, San Jose’s deputy director of business and economic development, said. “We’ll keep a very close eye on the local economy and the development scene, and then look to continually do updates.”

Local labor and affordable housing groups say the city should trust KMA and charge the highest feasible fees. “This fee isn't just an add-on, this fee is about legitimately addressing your impact on working families,” Buchanan said. “Not paying that fee is pushing that cost onto the people who can least afford it, which is largely Latinx and Black tenants here in the city of San Jose.”

In their view, any developments that start construction or may otherwise be grandfathered in without the commercial linkage fee is a development wasted. The groups have been pushing for the city to impose a fee for years as development sped up in the 10th largest city in the country.

“We can't afford to miss opportunities to do better going forward and generate resources to respond to the increased demand that will be created as we recover and jobs are brought into the city,” Mathew Reed, policy manager for nonprofit SV at Home, said.

The costs would most hurt developers that don’t already have a tenant in tow, meaning the project is “speculative,” he said. That would include most proposals in downtown San Jose, save for Adobe’s headquarters expansion and Google’s planned corporate campus near Diridon Station.

“This doesn’t hurt developers who are known as owner-operators, those who have cash, and they want to invest within projects,” Truong said. “For the other developers who need to secure speculative financing … look no further than Boston Properties.”

Indeed, Boston Properties in April halted construction on its million-square-foot Platform 16 office development in downtown due to the economic uncertainties brought by the pandemic. No downtown San Jose projects have been canceled during the pandemic, according to city officials.

As for retail developments, Truong said the city would be “out of touch” to charge extra fees on the struggling industry.

City staff members tried to split the difference late last month, recommending that the council adopt fees that would bring in about $10 per square foot for office buildings in downtown and less for other parts of the city. 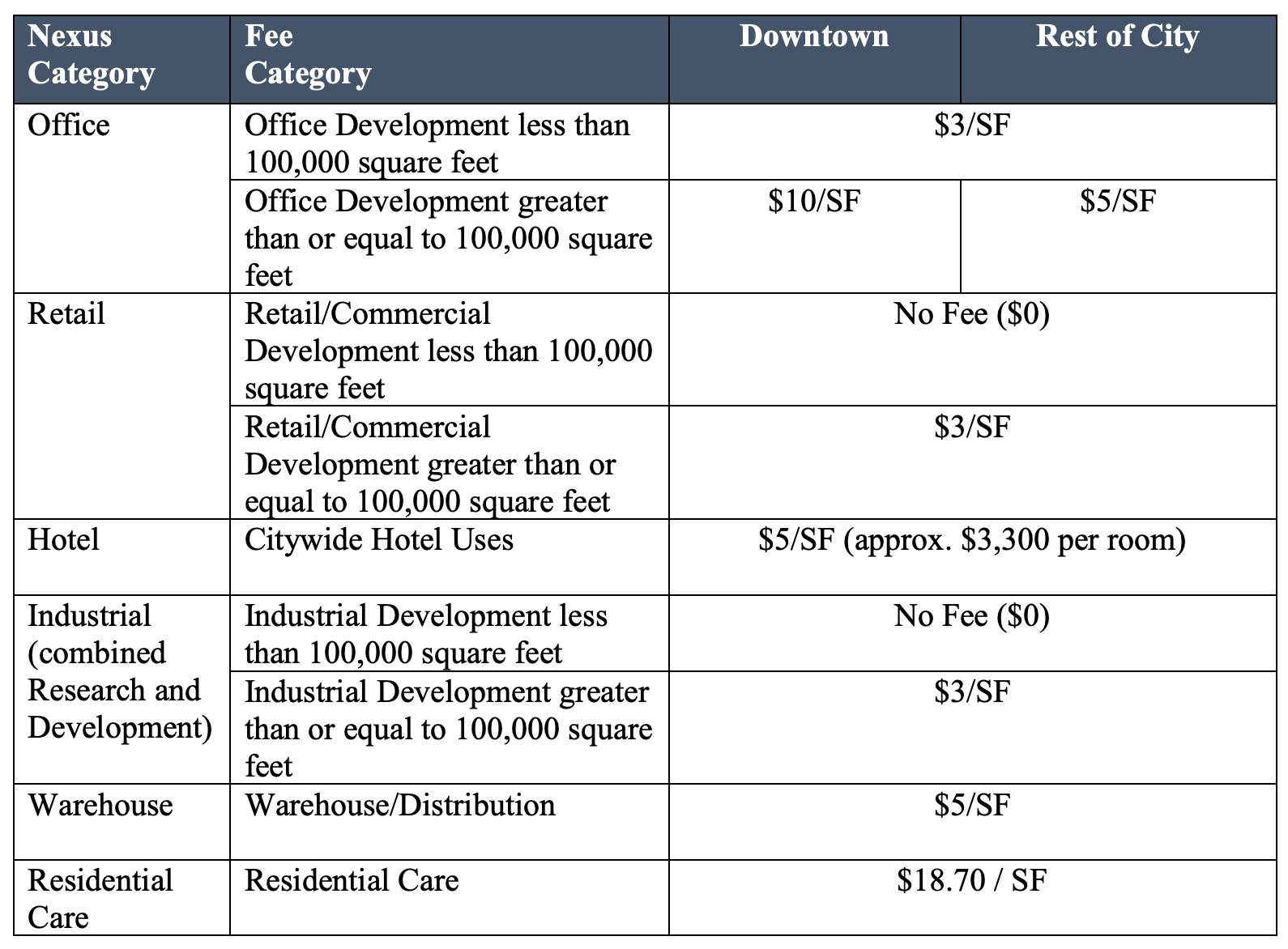 Officials estimate their recommendation would generate about $14 million in the next three years to go to affordable housing in the city without halting projects that would bring jobs to San Jose.

“The challenge that we’re considering is absolutely that balance that these are sort of long term impacts,” Burton said. “We’re trying to understand how best to deal with that.”

Today, city officials will weigh all of those arguments before voting on the fees. Residents can speak during the public hearing portion of the meeting.

Read the memos on the commercial linkage fee recommendations here. The San Jose City Council will convene virtually. To connect to the Zoom meeting, click here.