With Election Day right around the corner, San Jose Inside has given readers a peek into San Jose’s District 2, District 4 and District 6 City Council races. In this installment, we focus on District 8, where Councilwoman Sylvia Arenas is squaring off with her old Evergreen School Board colleague, Jim Zito.

District 8 lies along San Jose’s eastern border. Pushed up against the Foothills, the area encompasses the Evergreen and Silver Creek neighborhood, parts of East Side and a large swath of open space. D8 residents have increasingly grappled with gridlocked roads in recent years—especially the Capitol Expressway Corridor.

The district is also the site of some major public transit projects. Last year, the Santa Clara Valley Transportation Authority (VTA) finally decided to move forward with its light rail extension from Alum Rock station to the East Ridge Transit Center. Though excessively behind schedule and over budget, the extension aims to one day connect residents in District 8 with the rest of the region’s rail system for the very first time.

Forty-six-year-old Sylvia Arenas says she hopes to be an advocate for women and families in San Jose for another four years.

The councilwoman was born and raised in Silicon Valley’s capital city, but moved to the Evergreen neighborhood 18 years ago where she and her husband, José, are raising their two children. Arenas kicked off her public service career more than two decades ago after graduating with a master’s in public administration from the University of San Francisco.

She got her start working for the city of San Jose through what is now called Project Hope—a Parks, Recreation and Neighborhood Services program that’s a part of the Mayor’s Gang Prevention Task Force. In 2014, Arenas was elected to the Evergreen Elementary School District Board, where she served until she nabbed the District 8 seat in 2016. 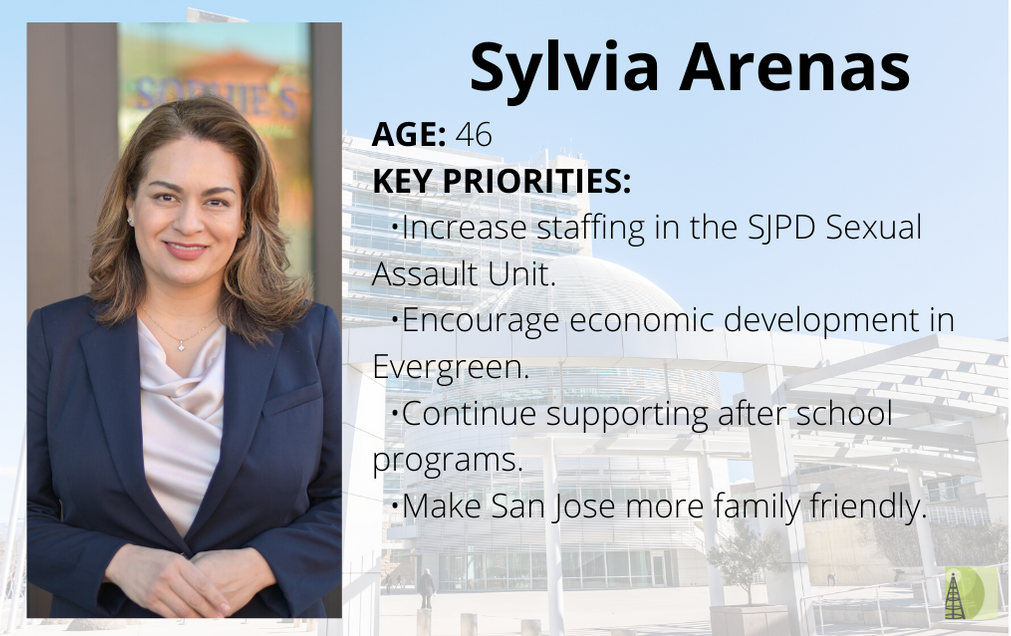 During her first term, Arenas made it a priority to tackle the rising number of reported sexual assaults in San Jose. If re-elected, she says wants to make sure that the City Council as a whole puts more of a focus on the issue. “We need to make sure that our policies address [the increase], and so we’re trying to look at the policies internally to see what can we improve to make sure that we have the best outcomes for our survivors,” she says. “We’ve had an increase in our Sexual Assault Unit, but we need to continue to have additional folks in those units that can speak the language.”

Arenas says it’s important for the San Jose Police Department’s Sexual Assault Unit to increase the number of women within its ranks.

The councilwoman says she wants to focus on Evergreen’s struggling retail sector, which has left the district with many vacant storefronts. Arenas recently advocated for her district to be a part of San Jose’s citywide retail strategy—a policy that focuses on boosting retail in areas scarce with businesses.

“We have a lot of empty storefronts that typically bring a negative element to our neighborhoods and create some insecurities for our residents who are shopping nearby,” she says. “I want to make sure that we have the vibrancy that Evergreen needs.”

Sixty-one-year-old Jim Zito, who works as a substitute teacher for Downtown College Prep-Alum Rock Middle School, has lived in D8 for the last 30 years.

A Brooklyn native from a family with deep New York roots, Zito moved to San Jose in the 1980s. Before venturing into his current role as an educator, the Evergreen School District trustee had a three-decade career in biotech. In 2002, he was appointed to San Jose’s Planning Commission, where he served for eight years. Zito has served on multiple committees for San Jose’s general plan over the years, as well. 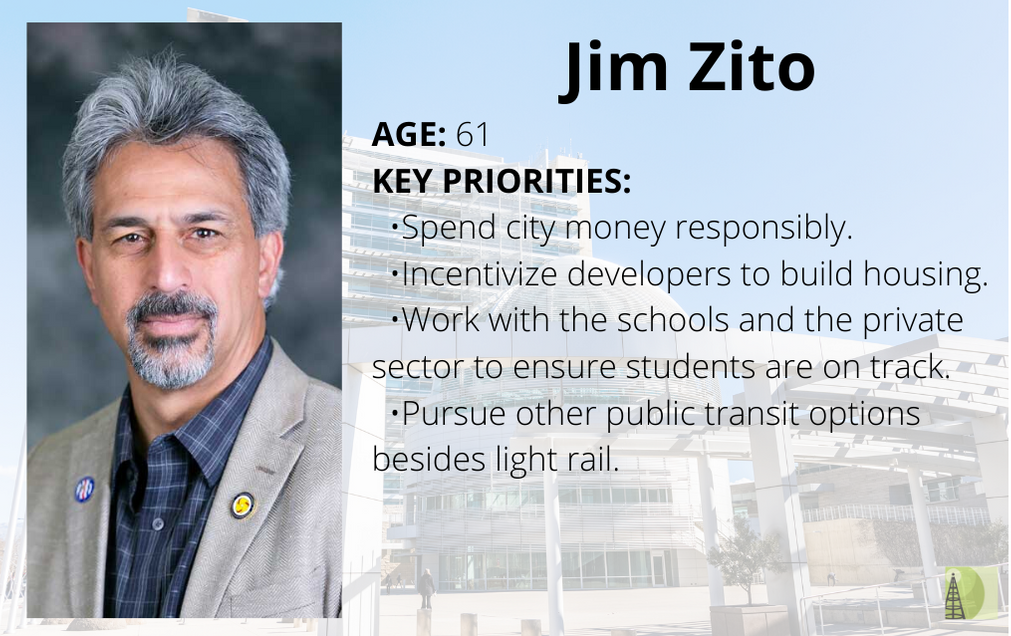 As San Jose struggles to keep pace with the increasing demand for housing, Zito says he wants to make sure that developers have an incentive to build in the Capital of Silicon Valley. “In order to build [housing] stock, you have to have the developers willing to do it,” Zito says. “It’s a free country, they can just walk away and build in the next city over. If we want them to build here, we have to make it conducive to build here.”

Instead of just focusing on building below-market-rate housing, Zito says San Jose needs to make sure that developers create units for all income levels so that more affordable options aren’t rented out by those who have the resources to pay more.

Unlike Arenas, Zito has taken a position against VTA’s light rail extension to the Eastridge Transit Center. The D8 hopeful has been a big proponent of light rail in the past, but given VTA’s low rider numbers, he says a change—like investing in buses—may be in order to help ease the district’s traffic problem. “Light rail just goes where the train tracks go,” he says. “You’re going to be limited because the schedules have to be built around trains on the track, whereas buses run more like traffic.”

San Jose State Political Science Professor Garrick Percival originally told San Jose Inside that it could be tough for Arenas to hold onto her seat given Zito’s long and active history in District 8. However, in early February, the San Jose Police Officer’s Association PAC released old divorce filings in which Zito’s ex-wife accused him of abuse.

Zito has denied the claims, which he says were fabricated and discounted by a judge who opted to award the pair joint custody of their children. But the abuse claims prompted Mayor Sam Liccardo, Councilwoman Pam Foley, the Silicon Valley Organization PAC and the Santa Clara County Association of REALTORs to revoke endorsements.

“I think these allegations have an important effect [on the election] mainly because it resonated with a lot of people,” Percival says. “I think it also lends questions with how he’d deal with people on council or on staff.”