Election Day comes early this year. In fact, early voting is already a week underway in Santa Clara County, where every registered voter now gets the option of mailing in their ballots or dropping them off in person anytime from now through Super Tuesday.

Over the coming days, San Jose Inside will bring readers overviews of some of the most closely watched local races in Silicon Valley, starting with the handful of seats up grabs on the 11-member San Jose City Council. This year, the city’s even-numbered council districts are on the ballot—2, 4, 6, 8 and 10.

If a candidate receives at anything greater than 50 percent of the vote in the March 3 primary, then they win the race outright. If nobody nabs the simple majority, however, then the top two vote-getters move on to a runoff in the November election.

To kick off our election series, we’ll start with District 2, where Councilman Sergio Jimenez is defending his incumbency against Jonathan Fleming.

District 2 encompasses some of the southernmost swaths of San Jose, including Santa Teresa, Coyote Valley and Monterey Road.

It’s a diverse swath of the city that abuts Evergreen to the north and extends south just short of Morgan Hill’s Madrone neighborhood. It covers vast expanses of open space—sidling up next to Coyote Valley—and vast tracts of single-family homes.

It’s a district that’s booming with new development and grappling with issues shared by most of the city: a dearth of public transit access, rising traffic collisions, residential displacement and a burgeoning population of homeless people.

Forty-three-year-old Sergio Jimenez hopes to capture a second term by touting some of the greatest hits from his first four years in office and his record as one of the most prolific policymakers from the progressive wing of the mostly business-aligned council.

Born in Mexico, Jimenez moved to California with his family at the age of 3. Raised by a single mom, Sabina, with his siblings in a small apartment in San Jose’s East Side, Jimenez graduated from Independence High School and went on to earn his citizenship in 2008. According to his campaign bio, he also became the first person in his immediate family to earn a college degree: a bachelor’s in political science from San Jose State.

Before winning elected office in 2016, Jimenez worked for eight years as a crime investigator for the Santa Clara County Public Defender’s Office, where he says he witnessed firsthand the intersection of poverty, violence and crime.

A longtime resident of D2, where he lives with his three children and wife Patricia, Jimenez says his history of public service—which includes his founding of the Oak Grove Neighborhood Association and six-and-a-half years of volunteering on San Jose’s Parks and Recreation Commission—sets him apart from his challenger. 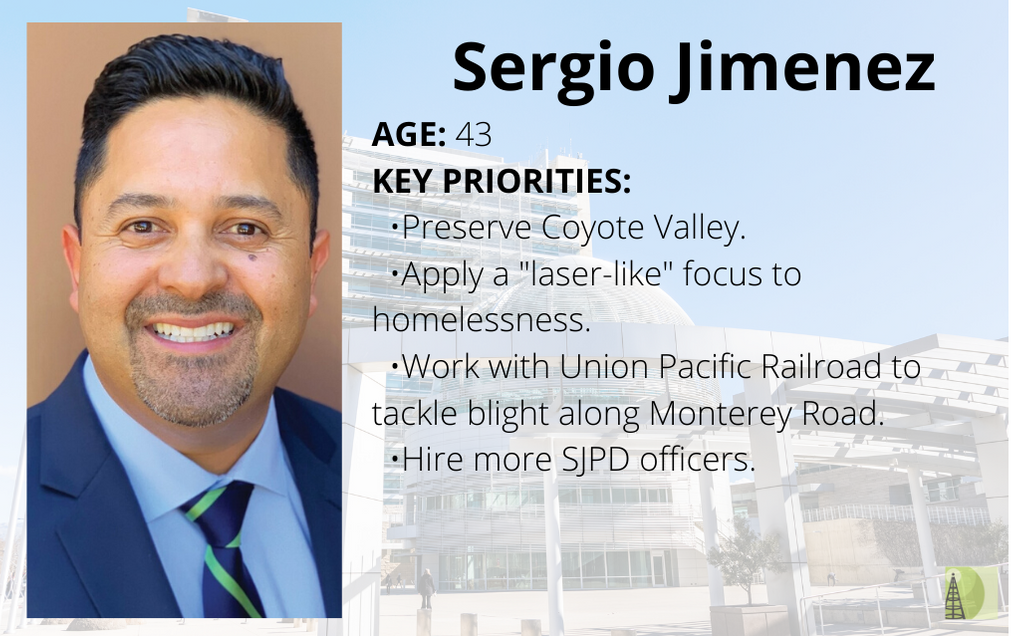 “Public service has been a consistent theme of everything I’ve done,” he tells San Jose Inside. “It isn’t something that I’ve just grown into as of late—that’s a big distinction. I think, based on the stories I’ve heard, I believe that I have the right temperament to handle some of the tough issues before us.”

Jimenez says he’s running for re-election to continue the work he started. He wants to continue advocating for the conservation of Coyote Valley and to finally secure an agreement with Union Pacific Railroad to resolve some of the issues—train noise, trash. homeless encampments—along Monterey Road.

One of his biggest priorities, he says, is to apply a “laser-like” focus to homelessness.

“I think it’s the issue of our day, and we need to really dig in deeper and in a much more meaningful way to address the many residents that are living on the streets,” Jimenez says. “I’m interested in deconstructing the whole process and figuring out where the challenges are, limitations are, where we’ve had some setbacks, re-evaluating how we’re spending the money [and] furthering and deepening the relationship with the county.”

On top of that, the first-term council rep says he wants to start having “very deep and long-needed conversations” with the community on how to address homelessness in D2.

Though the council is non-partisan, Jimenez is a registered Democrat, enjoys the backing of organized labor and favors progressive policies such as charging developers fees to pay for affordable housing, tenant protections such as eviction and rent controls and sustainability measures that limit the city’s carbon footprint.

During his first term, the D2 councilor has also prioritized the kinds of quotidian services in high demand from residents, such as litter abatement and public safety. In the 2018-19 fiscal year, he helped secure $1.5 million in the budget to open the long-idling San Jose Police Department South Substation—an achievement he considers a major victory, considering how the facility languished empty for years because of a lack of funding.

A veteran of the engineering industry—where he spent years working in the defense sector and designing technologies such as a blast-mitigating vehicle seat that protects soldiers from fatal brain injuries—36-year-old Jonathan Fleming is a new face in D2.

Born in Los Angeles, Fleming moved with his family to the Bay Area in 1992. Per his campaign bio, he went on to graduate from Santa Clara University with a degree in mechanical engineering, which led to his work in the high-tech sector.

Fleming’s path to civic service began during his healing from a catastrophic car crash, which he says forever altered the course of his life. Ten years ago, with traffic at a dead stop on I-880, Fleming says he was rear-ended by an 18-year-old motorist traveling at 85 mph without hitting the brakes.

That collision plunged Fleming from full health to permanent disability. It took 23 surgeries and years of therapy to mend his broken limbs. During one of his walks for physical therapy, Fleming says he encountered a neighbor who told him about a project that he felt would threaten the safety of the neighborhood. After some research, Fleming gathered signatures to oppose the project, which set him on a path of civic activism.

A dyed-in-the-wool, tax-and-regulations-averse, libertarian-leaning conservative with backing from the city’s business leaders, Fleming moved to District 2 about a year after losing a 2018 bid for then-Councilman Tam Nguyen’s seat in District 7.

Months after last year’s general election, Fleming and his wife Kristel decided to move out of the East San Jose district because they no longer felt safe raising their 2-year old daughter in their Senter Road neighborhood.

Fleming says he initially didn’t plan to run in the new district he called home, but changed his mind after residents began asking him to challenge Jimenez in 2020. 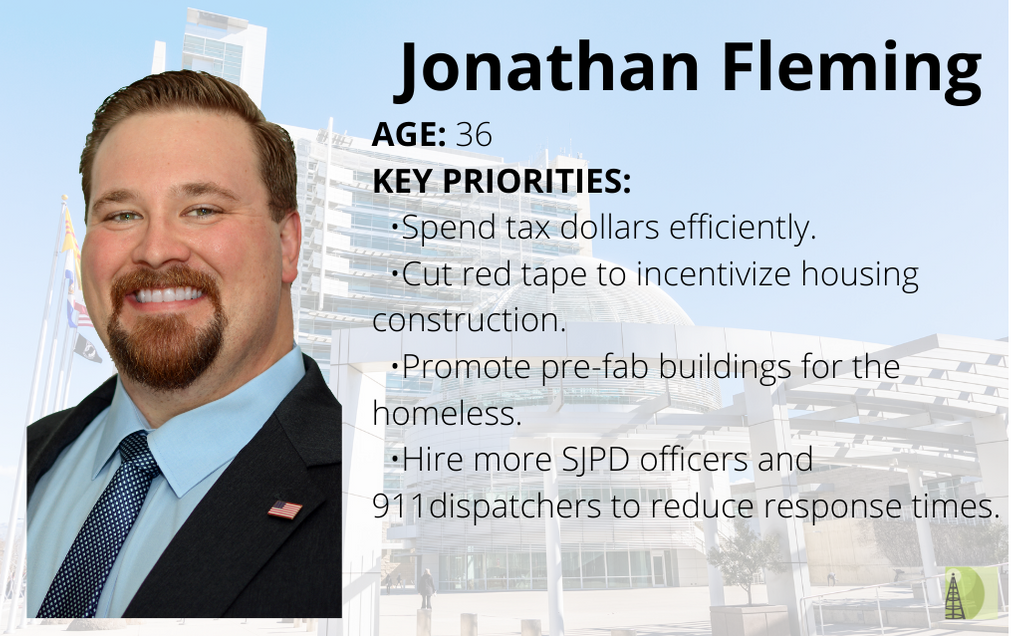 “His failed policies of tax, tax, tax—they’re just not ringing true, and people aren’t seeing the results,” Fleming says of Jimenez. “They look at me as someone who listens to the community, somebody who participates with the community and someone that designs solutions that will help us all out.”

As California’s intractable housing crisis drags on and younger residents flee for cheaper locales to raise their families, Fleming says getting new housing built is one of his top priorities. To achieve the level of construction San Jose needs to dig its way out of this mess, he says he wants to remove bureaucratic “red tape” by lowering fees and easing regulations for developers. Fleming says he also wants to streamline the city’s permitting process and “stand firm against implementing stricter rental policies in an effort to increase the supply of housing units.”

If elected, Fleming promises to draw on his experience as a neighborhood commissioner, a role he held from 2016 to 2018 as chair of an ad-hoc working group on homelessness. During those two years in that volunteer position, he says he advocated for more public outreach about future developments, such as San Jose’s proposal to build small sleeping cabins—called “tiny homes”—for the homeless.

As founder of the Senter Monterey-San Jose Neighborhood Association, Fleming says he wants to continue the kind of community engagement he fostered through that group and to ensure that residents’ voices are heard.

While the stakes are high in most of the five city council races as labor-interests seek to either hold onto or flip a seat, local political observers tell San Jose Inside that’s not necessarily the case in District 2.

“I think it's more about utilizing [Jimenez's] voice as a catalyst for what can happen in this upcoming election,” according to one campaign consultant.

Politicos interviewed for this article predict a clear win for Jimenez, who landed a coveted Mercury News endorsement—no small feat for a labor-aligned contender.

“For the most part [D2 is] a fairly happy community,” the same consultant says, “[and] the only person who stepped up to challenge him is not exactly a very strong candidate.”