A contentious proposal to bring a new nightclub to downtown San Jose comes back for consideration at Tuesday's City Council meeting.

In October, Jenny Wolfes asked the Planning Commission for permission to open SJ Vanity, a restaurant by day, lounge by night. The “ultra-lounge” would take over 58 S. First St., the historic two-story building emptied when Bella Mia Restaurant went out of business in 2014.

Commissioners denied her application in a 4-1 vote, citing concerns about the impact of a “mega-bar” open through 2am in downtown. Wolfes appealed that decision, arguing that there was no credible basis for the denial. Now it's up to the council to decide the fate of SJ Vanity.

Despite initial support from the Planning Commission last May, the project drew fierce opposition from the downtown business community. Next-door neighbors Hopkins & Carley, a law firm that employs former San Jose Mayor Chuck Reed, worried the club would cause a racket. 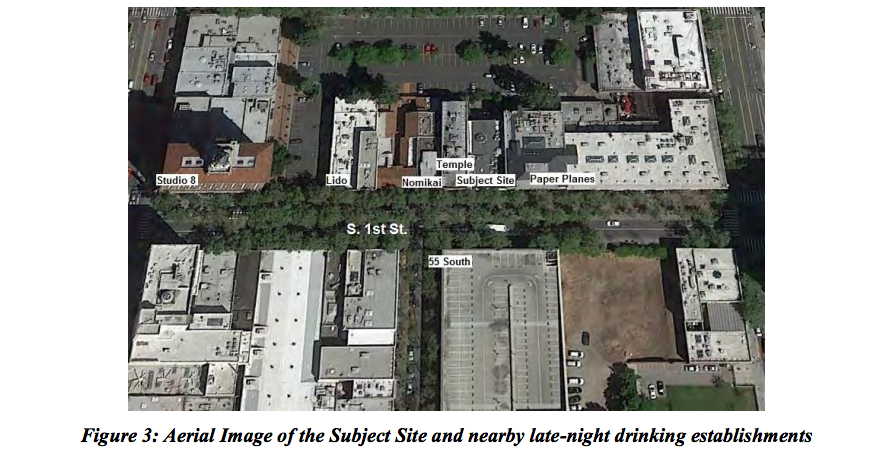 Wolfes addressed those issues, changing her project to include daytime uses while reducing overall capacity. She teamed up with restaurateur Thai Nguyen, who plans to open a third Craw Daddy location in the building. She also agreed to divide the venue, creating a banquet hall upstairs and late-night lounge on the ground floor.

That was enough for the Downtown Association, which reversed its original opposition to take a neutral stance on the project. But the law firm and other detractors remain unmoved. Mayor Sam Liccardo and council members Magdalena Carrasco and Raul Peralez wrote a memo urging their colleagues to uphold the Planning Commission’s rejection.

“The applicant has publicly and privately asserted her intention to book the entire upstairs and downstairs of the facility should she be afforded the opportunity,” they wrote. “Whether she does so for large companies such as Google or a private rave or club promoter, the result will still be the same: the site would be filled to capacity up to 549 people for late night use with a [conditional use permit] that could be utilized for five years before another city review.”

Council members Don Rocha and Johnny Khamis, however, cautioned against treating the applicant unfairly. When the project came up for discussion last year, they noted, some city officials had reservations about approving a bar with a capacity upward of 250 patrons. Yet in March, the council unanimously approved a permit for The Ritz, a bar and club with a max occupancy of 532. The Ritz lies in the SoFA District, near Agenda (occupancy of 703), Motif (805) and Miami Beach Club (461).

“Both proposals were supported by staff, both met city policy,” Rocha and Khamis wrote. “Both are near other large clubs. On what basis do we say yes to one and no to the other?”

It can’t be the quality of the operator, they continued, as the San Jose Police Department has publicly lauded Wolfes numerous times. San Jose police Sgt. Todd Trayer also said Wolfes is such an experienced club owner that he sends people to learn the ropes from her all the time. Wolfes also owns the Gold Club bikini bar and Studio 8.

“Being business friendly doesn’t just mean paying attention to the needs of large corporations,” Rocha and Khamis added. “It also means applying regulations equitably and predictably to every business in our city, small or large, high revenue or low revenue, politically connected or not.”

More from the San Jose City Council agenda for January 26, 2016: