Frank Ponciano recognized her straight away. How could he forget Cecilia Martin?

As a San Jose city policy aide, Ponciano rarely met the people behind the statistics he read in reports and cited in memos. So when Martin shared her story at her Highway 87 camp one May morning last year, it struck him as “refreshing, but sad at the same time.”

Now, he realized that the woman he met on a roadside and never expected to see again, would be one of his clients at the city-financed Second Street Studios, San Jose’s first long-term apartments entirely reserved for the most vulnerable chronically homeless.

That was in March. Martin and other prospective tenants were still holed up in motel rooms awaiting the project’s completion. Ponciano, 26, had just left his job at the city to become a community liaison for Abode Services, which would offer case management at the five-story, 134-unit facility on Second and Keyes streets.

“I was shadowing somebody else when we walked into this motel room and there she was,” he says. “I knew it was her because that meeting last year was salient in my mind. It marked the beginning of this gradual shift in my perspective.”

Even though he had no control over San Jose’s policy of incessantly sweeping homeless camps, he says it pained him at the time to represent the same agency carrying out the traumatizing practice. And when she mentioned being on a waiting list for affordable housing, Ponciano says he felt hampered and hopeless.

Martin’s life fell apart before she ever got to piece it together.

For as long as she could remember, drugs and alcohol gripped both parents and all of her siblings. At 4 years old, she says her mom and dad got her liquored up for the first time on bourbon and coke. She snorted her first line of meth at age 8 and developed a weed habit two years later. By the time she hit 14, crack cocaine had become a daily fixation.

“I became an addict before I even knew what that word meant,” she says.

Aside from a five-year prison stint, the occasional jail stays and a brief tenancy at a subsidized studio in 2009, Martin lived outdoors her whole life—on roadsides and riverbanks, under tarps or in tents. She says she felt so tired, especially at her age, closing in on 50. All the packing and moving, the relentless sweeps and citations took a toll on body and mind. After so long on the margins, she felt unseen.

“It seemed like I wasn’t young enough for anyone to care to help, but not old enough for them to feel sorry for me either,” she says. “I kept coming up against a brick wall.”

But on a spring morning in 2018, she heard Councilman Don Rocha and his aide Ponciano would stop by the camp to meet with her and her peers as constituents. She anxiously prepared for the visit by picking up litter, squirreling away stray belongings, arranging folding chairs in a circle and slicing up watermelon for her guests.

With nothing to offer but a first impression, Martin figured it better be good. She never expected to make such a lasting one on Ponciano, whose sense of powerlessness that day set in motion a series of decisions that eventually led him to his new job. And he never thought he’d meet her again—let alone to welcome her home almost exactly a year later. 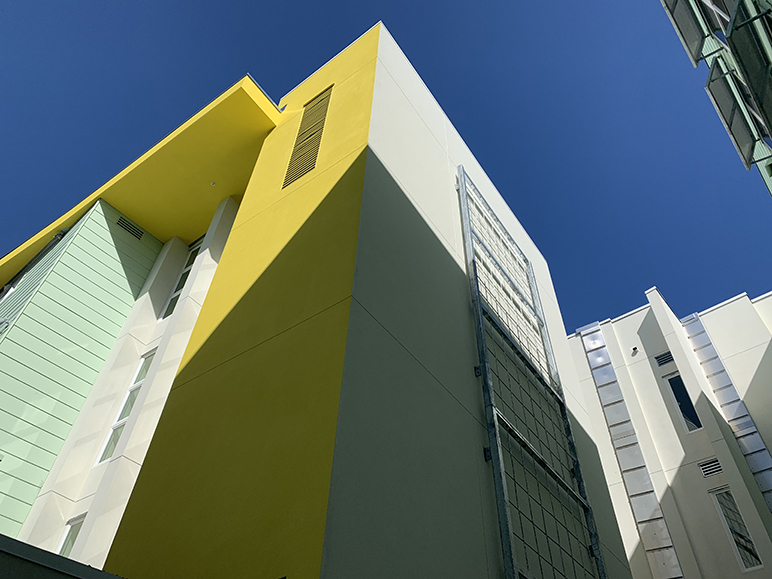 A view from an upper-floor courtyard at Second Street Studios. (Photo by Dan Pulcrano)

About a month after that meeting, things began to fall into place for Martin.

On June 15, 2018—her 47th birthday, she’ll never forget it—her case manager called to let her know that she’d been approved for a brand new apartment complex. Funded by the city, developed by First Community Housing and subsidized with rent vouchers from the Santa Clara County Housing Authority, Second Street Studios would house tenants identified in field surveys as the neediest of the needy, the persistently unsheltered.

“If I see an unfamiliar number, I don’t usually answer it,” Martin says. “And I was just like, ‘Wow, what a birthday present.’”

It would be a long time still before she moved in, though. Despite assurances that the modular units comprising the project would speed things up, construction delays kept pushing back the completion date. She got tired of hoping.

In the fall, Santa Clara County’s Office of Supportive Housing, which was tasked with providing services for the project, offered motel stays to Martin, her partner and the scores of others on the waitlist to at least keep them off the streets as the weather cooled.

“I told my fiancé, ‘Whether you go or not, I’m doing this,’” Martin says. “I’m tired of being out there homeless, tired of the dirt, tired of washing my hands and getting dirty all over again, tired of going to the bathroom in a bucket. I wanted running water, I wanted to take a shower without using a solar bag. I was tired of taking three hours to get ready for anything. I was just ready to be inside.”

Still, every month, for several more, they relocated.

The county and its nonprofit cohorts shuffled all 140-plus clients from one ramshackle inn to another, racking up a cumulative $1.2 million in lodging costs due to holdups.

“Being in the motels, I think I encountered even more trauma there, to be honest,” Martin says. “They’re not nice. One time, I wound up flat on my back in a pit bull attack. They’re not safe. But at least we had somewhere to go every night.”

Ponciano pulled up with a U-Haul to pick up Martin and her fiancé, along with totes of clothing, bicycles, bike trailers, a one-burner stove and their adorably corpulent Jack Russell terrier-Chihuahua mutt Mr. Speckles.

Abode staff served tacos to the new tenants, who marveled at the newness of the twin buildings kept spic-and-span by John Stewart Company property management—the shared upper-level patios, the bright sunlit hallways and the privacy of their own space.

“That’s when it really hit home for me,” Ponciano would later reflect. “That is the week I’ll remember for a very, very long time. It’s very clearly in my mind when these numbers—the thousands of people we know are homeless out there—became specific people, names, stories and families to me.”

Ponciano led Martin to her third-floor studio, where the gravity of the moment finally began to sink in. This was hers, to share with her dog and her partner. The toilet nobody else had sat on, the floor no prior tenant’s feet had touched—“I can get in the tub without my shower shoes!” Martin exclaims—and the spacious balcony where they could still take in the fresh air they’d grown used to from decades withstanding the elements.

“I can get ready and go somewhere in 30 minutes now,” she says, recounting the moment at a patio table beside Ponciano on a recent weekday morning. “If something happens to pop up—something urgent, or an appointment—there’s no excuse. No matter what I have to do for the day, at the end of it all, I can say I’m going home.”

Tears spring to her eyes. She stops to fight back a sob.

She pauses again to regain composure.