With housing costs growing far faster than wages, San Jose officials are considering whether to link rent control to the rate of inflation.

The City Council on Tuesday will consider a proposal to tie the annual allowable increases for rent-controlled units to the region’s consumer price index (CPI), which has ticked up from 2.1 percent to 2.8 percent in the past five years and reached nearly 6.6 percent during the Dot Com bubble of 2001.

In 2016, San Jose electeds lowered the city’s rent control ceiling from 8 percent to 5 percent and prevented landlords from banking unused increases—some went as high as 21 percent in a single year. But tenants and their supporters have argued that 5 percent is still too much. 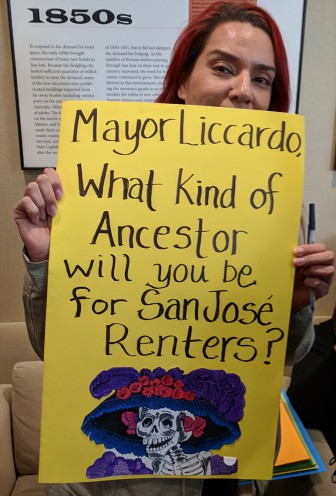 On Thursday last week, a few-dozen tenants and activists crashed the 18th floor of City Hall—where the mayor and council’s offices are located—to demand a meeting with Mayor Sam Liccardo, claiming he had been unresponsive to their requests for a face-to-face conversation.

They held up signs underscoring the connection between high rents and the fate of the homeless, the elderly and immigrants.

“Mayor Liccardo,” one banner read, “will you commit to keep seniors and children in their homes by supporting strong rent control?”

Liccardo was in Washington D.C. at the time. His policy director, Ragan Henninger, stepped into the hall and offered to meet with the group, but the activists told her they wanted to speak with the mayor in person and receive the same opportunity that apartment lobbyists and developers had.

“We’re very upset with his attitude,” Salvador “Chava” Bustamante, head of Latinos United for a New America, told Henninger beside the reception desk of the top floor. “He needs to understand that he cannot just ignore renters, he can’t ignore the advocates.”

In a new report titled “Soaring Rents, Falling Wages,” labor think tank Working Partnerships USA found that the gap between income and housing costs nearly tripled since 2009. Renters now need to make upward of $3,000 a month to afford a typical apartment in San Jose, according to U.S. Census Bureau data. 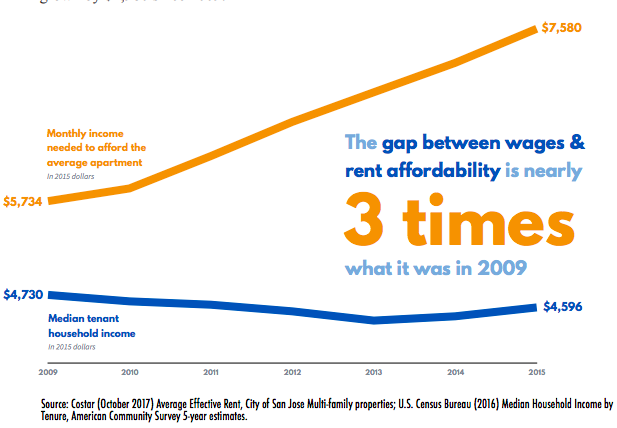 For seniors on fixed incomes, inflation-adjusted monthly Social Security benefits fell by more than 5 percent from 2009 to 2015, leaving them even further behind as rents continue to climb. The report notes that the number of homeless seniors in the area soared by 175 percent during that same timeframe.

In an interview with the Mercury News, California Apartment Association spokesman Joshua Howard dismissed the findings as “propaganda.”

Ninety-one-year-old landlord Joseph Bommarito urged the council to reject the idea of tying price caps to inflation because of the high costs of repairing the predominantly older rent-controlled apartments.

“These expenses are rising at a fast pace,” he wrote in a letter to the city’s elected leaders. “My annual cap is greater than the CPI [consumer price index]. Going to the CPI is not the answer.”

The proposal to connect rent control to the CPI would allow landlords to pass some of the maintenance costs on to tenants, however. It would also let them bank unused rent increases, a practice that was banned last year.

About a dozen other cities throughout the state have similar ordinances that base rent caps on the consumer price index, including Oakland and San Francisco. Some of the cities limit rent hikes to only a fraction of the rate of inflation.

The council is divided on the proposal, with Liccardo and his allies favoring a fixed-rate and the pro-tenant counterparts leaning toward the inflation-based measure. The swing vote apparently comes down to Councilman Tam Nguyen, who told the Merc that he’s still studying the issue.

More from the San Jose City Council agenda for November 14, 2017: