With two months to go before a statewide eviction moratorium expired in January, lawmakers, lobbyists and the governor’s staff were already deep into negotiations on an extension. They reached it just days before the deadline, providing six more months of a ban on eviction.

Now, with two months left before that extension itself expires on June 30, there is no proposed legislation on giving renters more time before the moratorium ends, and lawmakers expressed uncertainty that there would be.

“It remains to be seen if there’s appetite in Sacramento to extend the protections past June 30,” said David Chiu, a San Francisco Democrat who wrote the original eviction moratorium legislation. “But I don’t think any of my colleagues have an interest in seeing a wave of mass evictions.”

On Wednesday, a group of local-level elected officials, renters and tenant advocates called for an extension of the moratorium, either through legislative action or executive fiat, and a change to the elements of the law that still allow landlords to evict tenants for reasons other than failing to pay their rent.

“If we don’t get this right, we will struggle for generations to come,” said Carroll Fife, a member of the Oakland City Council.

One of the tenants’ primary objections was a major victory for their opponents, landlord advocacy groups, in the last round of negotiations: the state’s preemption of local eviction moratoria that went further than the state’s deadline, like those in the city of Los Angeles or Alameda County early in the pandemic.

Dean Preston of the San Francisco Board of Supervisors urged Gov. Gavin Newsom and legislators to allow cities and counties to set their own eviction moratoriums, as long as they went beyond what the state already made law.

“Don’t get in our way,” Preston said. “If you lack the spine to stand up to the real estate industry, you will have to live with that reality, but the minimum you can do is get out of the damn way.”

A spokesperson for Assembly Speaker Rendon declined to comment. 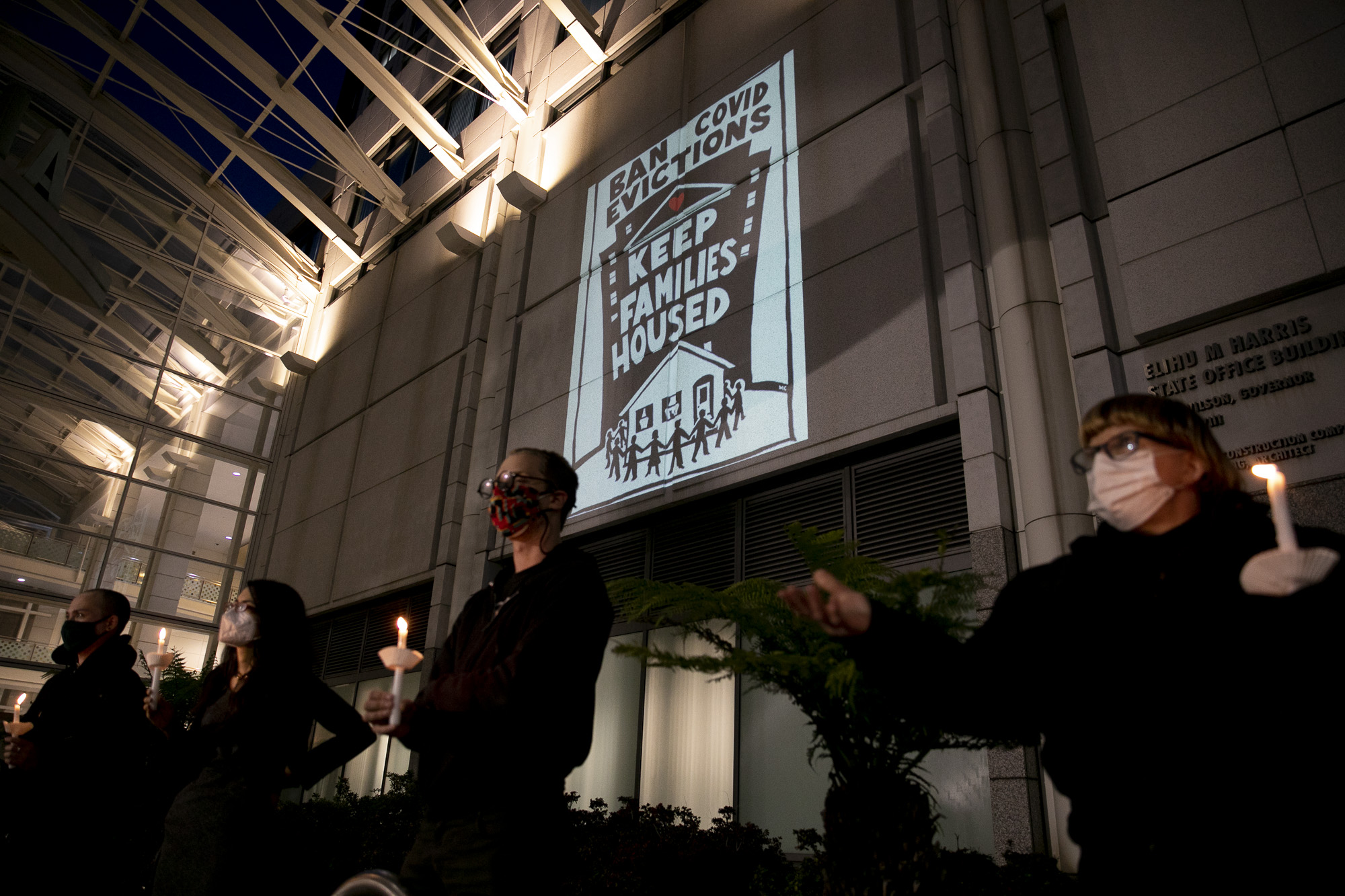 Housing activists and rent strikers participate in a vigil for tenants who they say will not be covered by Gov. Gavin Newsom’s rent relief plan at the Elihu M. Harris, State of California office building in Oakland on Jan. 29, 2021. Photo by Anne Wernikoff, CalMatters

The California Apartment Association, the state’s most powerful landlord lobbying group, is reviewing the need for another extension, but its chief lobbyist Debra Carlton said current legislation doesn’t account for tenants who refuse to apply for rental relief or those who don’t qualify for relief but still don’t pay rent.

“Housing providers who need help are slipping through the cracks because of issues with the current law,” Carlton said. “CAA will continue to evaluate whether an extension is necessary.”

Anya Svanoe, communications director for the Alliance of Californians for Community Empowerment Action, said the changes tenant advocates are calling for would likely come from amendments to the budget, which needs to be passed by June 15.

Activists and tenants also argued that some of the eviction protections instituted during the pandemic should be made permanent, especially a measure in SB 91 giving tenants 15 days to respond to an eviction notice. The previous range was three to five days.

CalMatters found the state’s plan to funnel $2.6 billion in federal funding into rent relief, as laid out in SB 91, has had mixed results. The state has received a total of 150,000 applications, and processed just more than 50,000 of them. More federal money is on the way.

“We are not seeing the level of participation in the rent relief program to warrant ending all protections on June 30,” Chiu said.

Activists and tenants also called for measures that failed to gain traction in the last round of negotiations, such as a total cancellation of rental debt and protections from credit agencies that will use rental debt to lower tenants’ credit scores.

“Renters are seen as transient, unreliable,” said Daniel Lee, a Culver City council member. “But while it’s the people who flip houses who only live there for four or five years, it’s the renters who stay.”