San Jose reduced its rent-hike cap last month, lowering it from an 8 percent max increase per year to 5 percent in a split City Council vote. On Tuesday, city officials will decide whether to impose a temporary freeze on rent increases or enact the new rent cap sooner.

The city’s 37-year-old rent control ordinance was updated for the first time in a 6-5 late last month, despite strong opposition from landlords. It is supposed to take effect this fall, but concerns from tenants has prompted the council to consider moving up the start date to June.

Passing an urgency ordinance would require a supermajority vote, which, as the Mercury News pointed out in an article last week, would be a long shot for a council so divided on the issue. It would only require a simple majority to pull the start date up to late-June, but that would also require more public hearings.

The new rules apply only to the 44,000 apartments built before 1979. State law prevents cities from expanding rent control to those constructed in the past 20 years.

In a Merc op-ed published over the weekend, California Apartment Association spokesman Joshua Howard called rent control “a step backward.” But he commended the city for considering what he deemed more effective measures, including anti-retaliation protections for tenants and a billion-dollar regional housing bond.

Tenants and some council members lobbied for a rent cap linked to inflation, but the council settled on a fixed rate at 5 percent.

This week, the council will decide whether to bolster its rent stabilization ordinance with protections against Ellis Act evictions, a state law that allows mass evictions if a landlord decides to sell the building to leave the rental business. In other cities, landlords have to provide relocation compensation if they sell off a rent-controlled building.

Hundreds of residents at The Reserve Apartments have been in talks with City Hall over relocation benefits, as the property owners plan to raze the buildings to make way for market-rate condos.

Also on the table is a plan to create a compliance registry to make sure people follow the rules. The city will also have to assign more staffers to work on enforcement, since staffing levels for San Jose’s rent ordinance is much lower than comparable cities.

Vice Mayor Rose Herrera, along with council members Manh Nguyen and Johnny Khamis, cautioned against placing too many restrictions on rent-controlled units, which make up just 11 percent of the city’s housing supply.

“Rent control has shortcomings and is certainly no panacea for the housing crisis,” they wrote. “San Jose's current ordinance may have landed on a ‘sweet spot’ that protects renters, preserves naturally affordable older housing stock while not driving out the local ‘mom and pop’ owners.”

While the average cost of rent-controlled units increased by 11 percent from 1990 to 2014, incomes of tenants in those units fell by 10 percent, according to Jacky Morales-Ferrand, the city’s housing director. 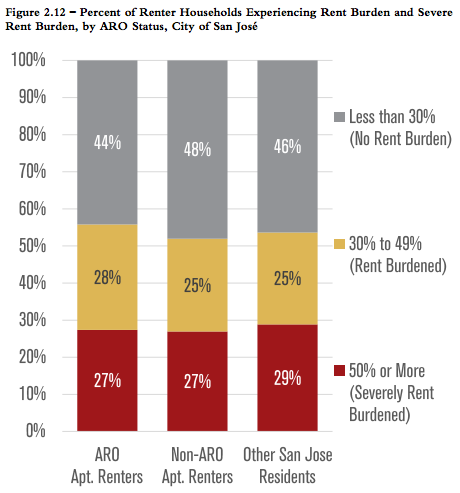 In San Jose, about 28 percent of rent-controlled households spend 30 to 49 percent of their earnings on housing. Twenty-seven percent spend more than half their paychecks on rent. That means even slight upticks can have a huge impact on tenants, Morales Ferrand wrote in a memo to the council.

District 6 claims 22 percent of all rent-controlled units, while districts 4, 8 and 10 each have less than 2 percent of the city’s stock.

According to a consultant’s report, the city’s rent control laws haven’t had a limiting effect on rents. Even the newly lowered cap, at 5 percent, exceeds the 3.4 percent average annual inflation rate for the past 35 years. The average yearly market rent increase for the same timeframe comes to 4.7 percent, which means that from 1990 to 2014, the cost of rent-controlled units rose at a faster rate (43 percent) than rents in market-rate units (35 percent).

Meanwhile, all new units build in the city last year were market-rate, according to a new study by apartment-search website RentCafe.

The memo for this week’s council meeting comes with hundreds of pages of attachments, including the consultant’s report as well as meeting minutes from previous public hearings on the issue. Also, here’s a link to the correspondence on the rent control discussion.