As on every other Thursday evening in 2021, roller skaters strapped on their wheels on July 1, looping and dancing in the center of “Rotunda Roller Rink” tucked below San Jose City Hall towering above.

Hundreds of skaters have called the city-owned West Plaza’s open space and amphitheater seating home over the past 29 weeks, creating community, hosting civic engagement, de-escalating confrontations and holding space to safely skate on the otherwise empty plaza at 200 E Santa Clara Street—an extension of routes weaving in and around the downtown core.

As city employees returned to work, however, security had other plans.

Shooing the group away from former-City Manager David Sykes’ going away party on the other side of the glass, they called San Jose police officers to roll up on Roll Out’s weekly DIY digs, along the same corridor touted as a future gateway of connection as public spaces become places to recharge and reconnect.

The skaters’ hand-held, portable speaker—the same one that projected Mayor Sam Liccardo’s voice during the Valley Transportation Authority mass shooting memorial on the same plaza—was to “blame” for threats of being fined for recreating without a permit, before officers eventually left without a fuss, seeing no reason to disperse the crowd.

One month after Governor Gavin Newsom officially reopened California’s businesses, schools and government buildings, the peaceful mob of beginners, families and advanced skaters utilizing the city’s central plaza are wondering if they’ve been shown the door.

“For (security) to tell me what we can and can’t do on land I've been at on a daily basis for the past year taking care of people is baffling to me,” says Justin Triano, one of the organizers of several local skate events. “We’ve become stewards of this space; why isn't City Hall embracing the fact that civic engagement has blown up there, unless they don't want the voice of the people to be amplified?” 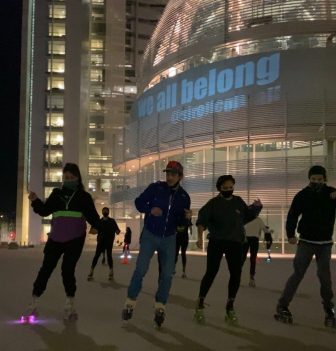 Ironically, the confrontation was on the same night Oakland skaters took over their City Hall, demanding more recreational spaces, as claimed parking lots started to reopen for cars, kicking out skaters without any replacement.

Reserving the West Plaza’s wide open space means coughing up a $125 per hour permit (plus additional security fees) after submitting a 19-page application a minimum of 45 days ahead of time.

The city’s event services office has started permitting for events past August 2, but staff wasn’t sure if events like skating could even happen, citing concerns of insurance and legality. City staff bounced permit bypass questions from the Office of Cultural Affairs to City Administration and Public Works.

“If you live in San Jose, you don't get that real estate—that feeling of a community,” Chavez said. “This is a good space to have it every Thursday, and we're gonna continue to have it here … The first thing they do is try to fine us instead of getting to know what this is about.”

According to a 2015 report from urban space consultant Gehl, San Jose residents and the downtown workforce have for years complained of City Hall’s gloomy, unwelcoming demeanor, but applauded events that naturally occur in the area—including skating, which takes advantage of its natural lack of foot traffic and seating.

As the city strives to revive its core after the pandemic and before entering into new stages of development, policy leaders call the street the main gateway in and around San Jose “that fosters greater interaction and connection between downtown and the city at large.”

Fred Buzo, SPUR’s San Jose director of policies, fundraising and city-level decisions, sees the Rotunda Roller Rink as a natural fit for the space—whether allowed or not.

“Whether it’s skateboards, roller skates, scooters and things of that nature, the reality is that when you look at (City Hall’s plaza), that's what it looks like it was built for,” Buzo said. “Why not find a way to incorporate that type of activity, obviously in a safe way?”

He pointed to similarities in how Bike Party has historically reverse-engineered placemaking; once “not allowed” on Campbell’s public streets, the discussion around the bikers’ vision was one part of how Viva Calle and the idea of closing down streets evolved.

Akin to how trails run through closed parks and outdoor dining thrives in the South Bay’s warm-summer Mediterranean climate, local leaders think there’s plenty of room to reassess or relax other norms, rules and past behaviors.

“This is definitely the appropriate time to look into and consider this, because we kind of all hit the reset button,” he said. “Think about what's happening not only with San Pedro Square, but even suburban San Jose, where restaurants have closed off parking to seating—that never, ever would have happened.”

Chris Thompson, San Jose’s Knight Foundation program director, thinks now is the perfect time for that conversation to give the city the opportunity to say “yes” to something new, knowing that life coming out the other side of the pandemic is already different.

“San Jose loves its rules and enforces few of them, and I’m a really big believer in respectfully questioning everything,” Thompson said. “Why are we doing things the way we do things? Where'd that come from? If an organization has a vision, is it something that they can take to multiple different places, is it a way to enliven the city or a way to get people more active? I just think there's some real opportunities, and we've got to think big.”

He’s not sure a past history of doing something is justification for the activity, itself, but those experiences could help provide a clear program for city or parks organizations to follow, especially if there’s equity in decision making, from teen skaters and college kids to young families and senior residents.

Thompson posits Roll Call skaters could gain an affordable, central location with access to social and civic issues by contacting elected representatives and working with community leaders to carve out avenues connecting multiple departments and organizations in the city—from Cultural Affairs and Public Works to the City Council and San Jose Downtown Association.

But as activists in Minneapolis wrestle to hold space at landmarks like George Floyd Square, is there any hope of changing San Jose’s planning and public space beyond optimistic YIMBY planning?

Triano hopes the city—or anyone else who wants to help secure safe spaces to skate—will reach out to Roll Call directly and help give the community a chance to survive.

“People don't want to always be rebellious; we’re just trying to skate and dance—it's our modern day Footloose,” Triano said. “How much longer can we hold this space together without getting some sort of relief that is not always conflict?”