In the heart of San Pedro Square, on a side of the street that, until 2018, saw little foot traffic, shoppers mill about four artisan shops, each roughly the size of a storage unit, that occupy 12 converted parking spots from the adjacent garage.

It is a sunny Wednesday afternoon nearly three years after San Jose, in partnership with the San Jose Downtown Association and the Knight Foundation, launched the 200- to 300-foot micro retail incubators known as Moment, to let local businesses to test the market in an area where the cost of retail space has soared. As the list of closed businesses continues to rise, experts say micro retail could provide a more economical alternative to large retail space.

A report recently released by the Knight Foundation provides hope that incubators and “micro retail” locations could be a lifeline for small businesses hit hardest by the pandemic.

“The premise is that an entrepreneur can create their own business, have some security and establish how important a retail element is to their business,” said Chris Thomspon, director of the San Jose branch of the Knight Foundation.

Moment represents a $5 million investment from the Knight Foundation. San Jose owns the land and San Jose Made, a tenant and San Jose Downtown Association member, manages the project and its rotating cast of businesses. The $1 per year, five-year lease with the city for Moment ends in 2022.

Araceli Vizcaino opened her vintage clothing shop, Thrill of the Luxe, out of a Moment storefront last month after quitting her job with “zero backup.” Customers revel in being able to touch and try on vintage clothes, she said.

Part of the appeal of Moment, she said, is that it’s a test ground and the no-pressure environment enables her to build experience managing a retail storefront without having to pitch to a landlord—an intimidating prospect for someone without experience.

“It is the perfect way for me to figure out whether having a physical retail space is valuable for me and my brand,” Vizcaino said. “I definitely feel a lot more confidence going to someone and saying I have been successful in this space, this is what I can afford.”

Kevin Biggers, chief strategist of San Jose Made, said he would love to see a push for more micro retail. When searching for tenants, he said, the goal is to have an eclectic mix—artists, florists, purveyors of sustainable products—in an attempt to create a single destination with local texture, like a bazaar.

Sales don’t take such a hit in an economic downturn, when experience is the focus, Biggers said, especially if the business has low overhead.

“These spaces may very well lie vacant for a really long time unless there is some sort of accommodation,” he said. “If you were to tell the story of some of the retail failures throughout the Bay Area … you would see some retailers have ignored or priced out this amazing pool of businesses.” 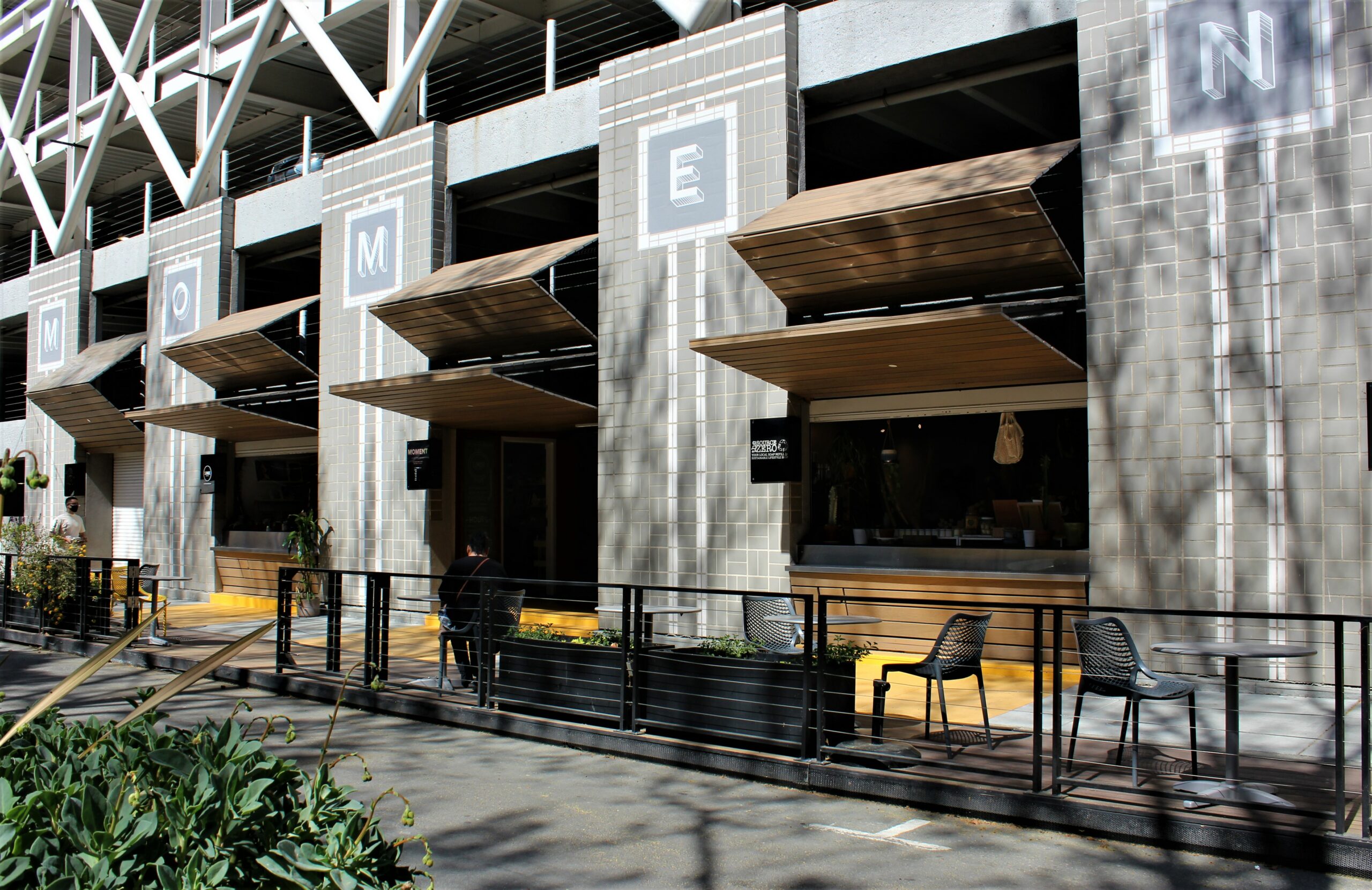 San Jose, in partnership with the San Jose Downtown Association and the Knight Foundation, launched the 200- to 300-foot micro retail incubators known as Moment, to let local businesses to test the market in an area where the cost of retail space has soared. (Photo by David Alexander)

Because Moment is an incubator, it can be a stepping stone—like training wheels to build a brand—to a permanent location. Such is the case for former Moment tenants Fractal Flora, now located in the Rose Garden District, and Aulala, which recently relocated to Valley Fair.

Alyssarhaye Graciano is the owner of BlackSheepMade, another former tenant at Moment, said her time at Moment from the end of October 2021 through Valentine’s Day was invaluable, even if she realized she wasn’t necessarily looking to settle into a permanent retail space.

“Once I got into a business zone of you got to produce, produce, produce, it is definitely less fun,” she said. “Not only did [Moment] give me a space to rebuild my brand, but it allowed me to do it in an affordable way … If I were in a different place in my life, my experience at Moment would have driven me to seek a more permanent space.”

Another former tenant, Angie Chua, of Bobo Design Studios, said with the “insanely high” cost to start a business from the ground up, many small businesses are “set up to fail.” Her experience at Moment caused her to shift to online sales.

“The idea of having my own store is the epitome of where I want to be, but after running it for a few months, I realised this is not where I want to be,” she said. “There are not a lot of resources and help to get people there. That is why this incubator is such a genius program … With the state of retail now, this is something that could be really helpful across the spectrum.”

But whether Moment can be replicated—either in another area of San Jose or as a more stable micro-retail business trend—remains to be seen.

Eaamon O’Connor, project manager at Gehl, the company that produced the retrospective on Moment, said part of the reason Moment has been a success is that it acts as a “connective tissue,” linking an otherwise dormant area of San Pedro Square to other shopping.

Another incubator, or indeed micro retail in general, needs to first understand what suits the area, O’Connor said.

Nathan Ulsh, director of policy operations with the San Jose Downtown Association, agrees with O’Connor, but says “the proof of concept can be iterated.” Moment businesses, he said, have fared better than other businesses, much to many people’s surprise.

“It blew us away. It proved that this concept works,” Ulsh said. “This just proves micro retail can work in San Jose.”

But in order to have more mico retail shops in San Jose, Ulsh said developers would likely need to get involved, carving out space for it in larger projects.

Blage Zelalich, the city of San Jose’s downtown manager, called the Moment project a “perfect storm,” with the city-owned property being vacant in the right location, private money funding the endeavor and a local business managing it.

Though the Moment lease is up in 2022, Zelalich said she would be “shocked” if the project were discontinued. In fact, she’d like to see the entire ground floor of the garage converted into micro retail.

It is hard to say definitively whether micro retail is viable, especially without the reduced rent and high foot traffic Moment enjoys, but the city is open to the idea, Zelalich said. “The city wants to see anything that activates the ground floor of a development, a mixed use development,” she said.

The Knight Foundation’s investment in Moment aims to show developers micro retail works, Thompson said. He thinks the message is getting through.

“There is a lot more thinking by developers about how they program the quasi-public spaces in their buildings,” he said. “It is easy to take the safe route, but it is really really hard to do something new. Who would have thought you could turn a parking garage into retail?”