On the first Saturday night in December, a thundering rumble of hundreds of wheels on roller skates, skateboards, bicycles and an electric unicycle reverberated throughout the otherwise empty stalls in a San Jose State University parking ramp.

Skaters wound down the ramp’s smooth corkscrew floor, slalomed around parking blocks and floated over speed bumps to house music and West Coast hip-hop blasted out of bluetooth speakers. Face masks meant to prevent the spread of Covid-19 also kept cheeks warm against the crisp winter air inside the DIY roller rink and outside on the streets.

Joy Hackett, a volunteer organizer for the event, glides around the crowd of people and blinking lights on her velvet maroon roller skates listening to what she calls “downtown beats.” As a kid she skated at Milpitas’ CalSkate, but picked up skates again three years ago—ahead of the pandemic-induced renaissance for the retro wheels.

“With Covid, it’s really hard to find that feeling of home, so this is literally like the closest to safe thing to do,” Hackett says. “It’s something to be a part of out in the open air without being alone.”

This peaceful mob of skaters meets every first Saturday of the month for Roll Call, a miles-long tour across Downtown San Jose, trekking from home base at City Hall northeast to Roosevelt Skatepark, clacking along the walkways underneath holiday lights hung in Cesar Chavez Park before looping around the empty SAP Center and back.

These rides offer a little of the obvious: a sense of community, a break from the monotony, a mental health boost and hours of exercise. But after scratching the surface, it’s also obvious these outings are an act of passive protest, as skaters and cyclists command full streets, carving out lanes next to cars simply to take up space.

The entire operation is a night of community building, mutual aid and standing in solidarity with BIPOC skaters. It’s also a form of activism, railing against issues like car culture, gentrification, the police and a lack of public space to skate in San Jose.

Drivers, and even the San Jose Police Department, might not always appreciate sharing the road with this colorful cadre of wheeled activists, but to be fair, the skaters and cyclists don’t love it, either—and that’s also the point of these rides.

That’s why skaters, including 22-year-old Hackett, seek out abandoned basketball courts, protected parking ramps on rainy days and some of the smoothest ground in the city: the middle of the street. 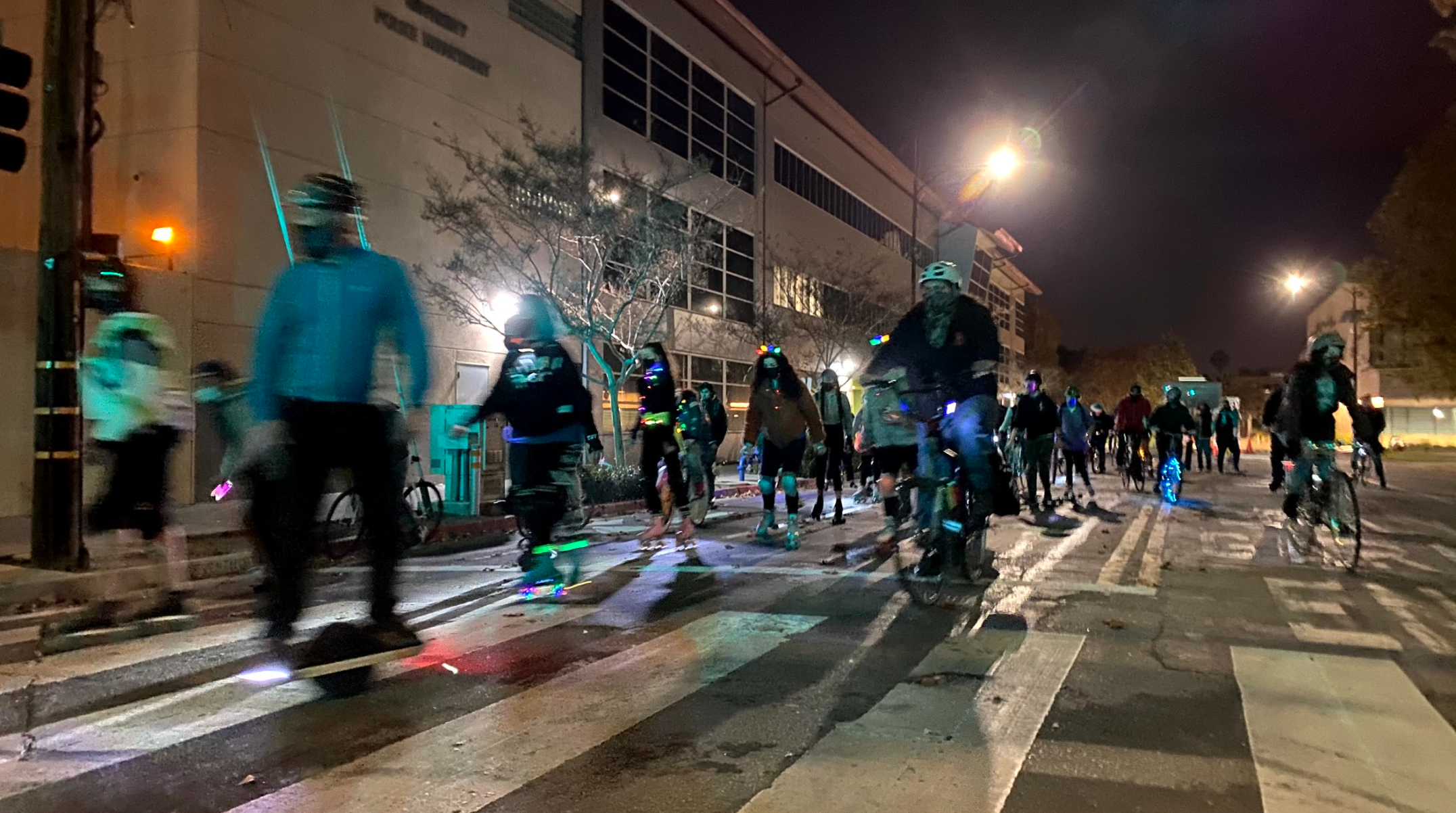 SMOOTH RIDE: San Jose skaters and cyclists seek out abandoned basketball courts, protected parking ramps for rainy days and the smoothest ground in the city: the middle of the street. (Photo by Katie Lauer)

“[Roll Call is] really one of the only safe spaces for skating out here, otherwise, there’s S.F. or Oakland, but I don’t have that kind of gas money,” she says. “This is one of the only spaces where I can skate, learn other moves from people and show off my moves.”

Joining forces with other community organizations, like HERO Tent and B.L.A.C.K. Outreach, the evenings are typically punctuated by speeches from nonprofit leaders and campaigning politicians. Speakers take turns borrowing a sound system microphone that is in desperate need of repair to talk civic engagement during rest breaks turned into political presentations.

Sometimes the talks are about the history of the Olympic Black Power statue or news of the Sheriff Office’s conceal and carry permit policies. Occasionally there’s a Public Service Announcement for local holiday “Occupy City Hall” markets or the new Change Garden project at Grace Baptist Church.

Kiana Simmons, president of HERO Tent, a nonprofit born from the summer’s protests over the murder of George Floyd at the hands of Minneapolis police officers, says Roll Call reaches those who may not otherwise have a view into local politics.

“There’s so many different avenues for people to join protesting or just be active in the community, and Roll Call is definitely one of them,” Simmons tells San Jose Inside. “People can participate in a neutral space that’s not too high intensity. It’s super important for people to feel like they can still be active in the community but also have a little bit more of a casual time.” 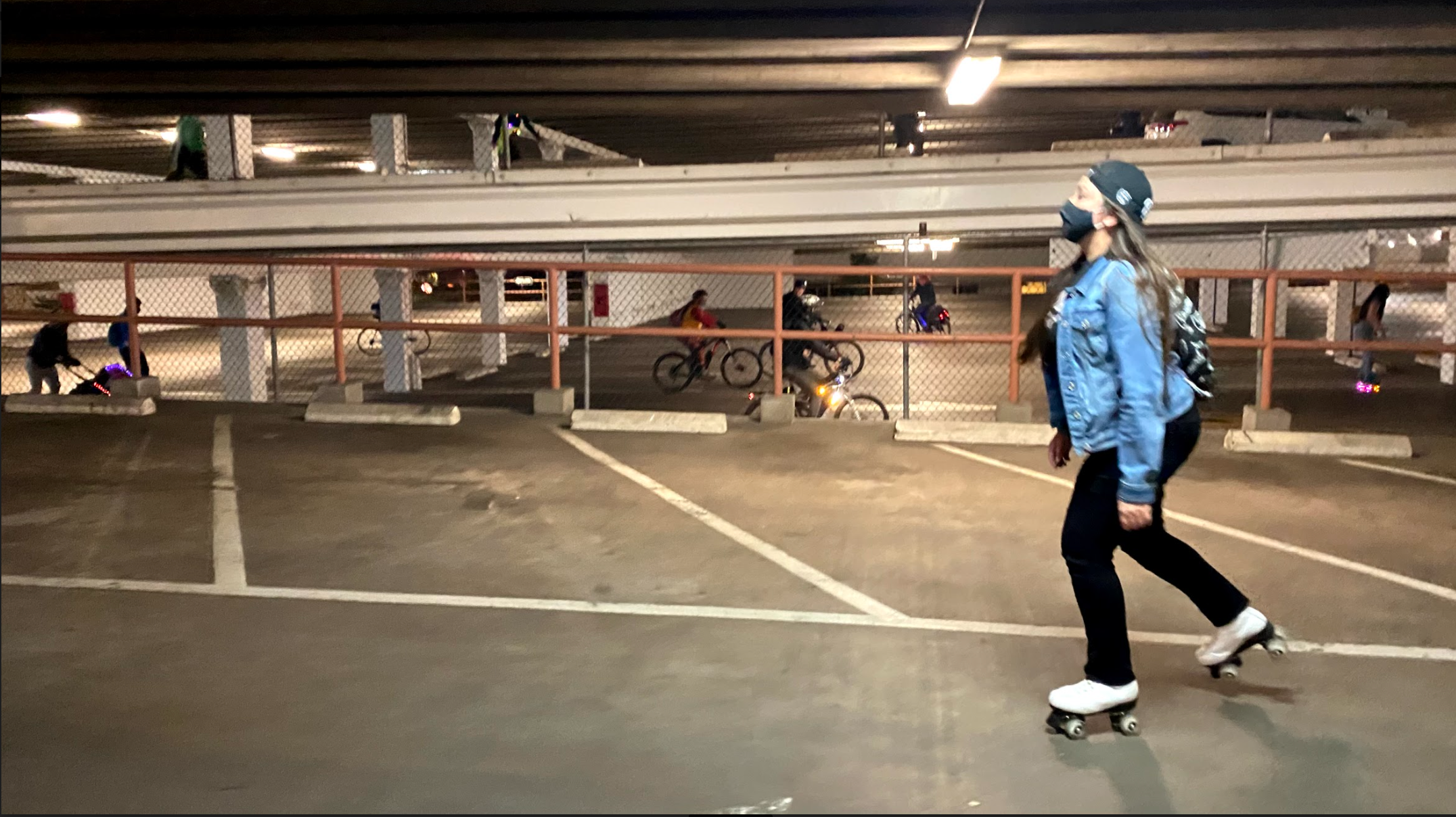 UNDER COVER: San Jose skaters and cyclists seek out abandoned basketball courts, protected parking ramps for rainy days and the smoothest ground in the city: the middle of the street. (Photo by Katie Lauer)

The last Roll Call of the year couldn’t have happened at a better time: only 24 hours ahead of Santa Clara County’s second shelter in place order, which public health officials announced as hospital ICU bed availability approached 15 percent.

The CDC guidelines for outdoor recreation and sports advocate for staying physically active and getting fresh air, as long as people do it while donning masks and staying six feet apart. The mechanics of skating outside at a steady 2 miles per hour makes it a safer hobby than some others.

The event spans generations, from toddlers in strollers to older folks, and everyone in between. It’s that critical mass that keeps everyone safe.

Alongside a team of volunteers, organizers Justin Triano and Lucy Chavez scope out a route ahead of time. Assigned medics and pace-setters use walkie-talkies for traffic control past the headquarters for Zoom and Adobe and tents along the Guadalupe River.

Another reason these evenings go smoothly is because they’re not new.

Amy Hewett, who splits her time on four and two wheels between Silicon Valley Roller Girls and San Jose Bike Party, says Roll Call is the latest version of more than a decade of meet-ups, parties and skate sessions across the South Bay.

The lifelong Sunnyvale resident says the idea of hosting a “pop up rink” started around five years ago, around the time San Jose Skate closed its doors after 37 years. That preexisting network of people on wheels has filled the city’s skating gaps ever since.

“Roll Call really was bred from friendships made between friends in Bike Party who wanted to skate more,” Hewett says. “With all the things that have happened with the pandemic, it was such a natural switch to, ‘We’re cute and all, but there's a message.’”

These community building rides also provide an escape because there’s no time to worry about job productivity, rent, grades or dinner.

“When you’re on a bike or skates, you have to slow down and be in the moment; you can’t live on internet time,” Hewett says. “We come out here to spread some good vibes and hear some good news.”