San Jose’s roads are among the roughest in the nation, with more than 60 percent classified as “poor” by federal standards, according to a recently released report.

The data, compiled by car shopping application CoPilot, ranks the South Bay city’s streets the second-worst in the U.S. for large cities, doing slightly better than the San Francisco and Oakland area, which were combined into one metro region in the report.

Chicago-based CoPilot compiled data for the study from the Federal Highway Administration’s International Roughness Index, and ranked urban areas based on size and the percent of its roadway miles in need of attention.

News of the rocky roads in the nation’s 10th largest city is not lost on San Jose leaders.

City officials last year announced a nine-year plan to repave 1,490 miles of residential streets. In 2019 alone, San Jose was set to repave or repair 300 miles of roadways, many of which have only gotten emergency maintenance since 2012 due to budget shortfalls.

“A pavement maintenance program of this scale is a long time coming for San Jose,” San Jose Transportation Director John Ristow said in a statement announcing the program last year. “Our team has been preparing for two years and is excited to get these local and neighborhood streets back into the kind of condition our residents expect and deserve.” 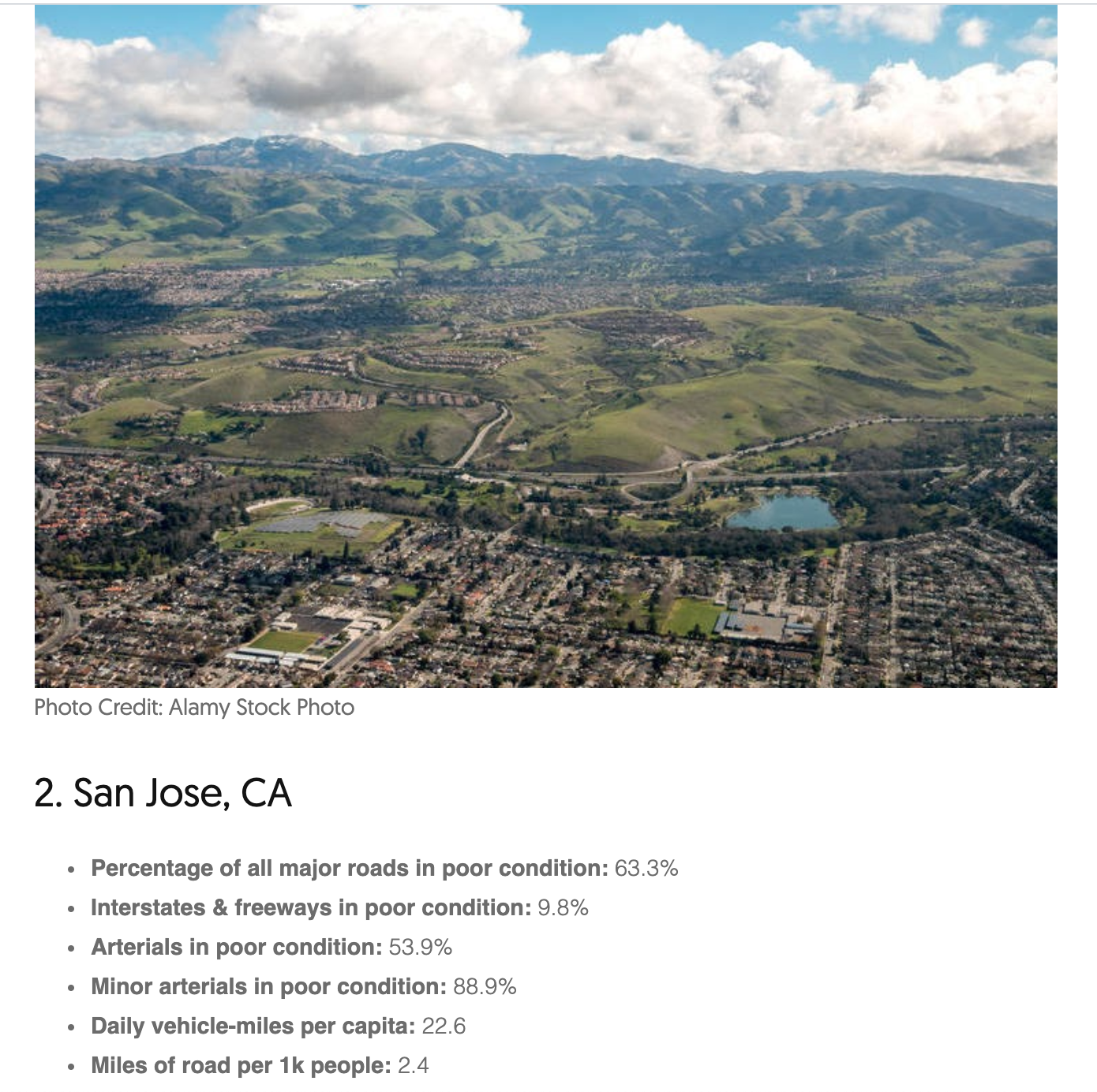 San Jose ranks No. 2 on a national list of large urban areas with poor road infrastructure. The city has been working to improve its roads in recent years. (Image via CoPilot)

The funding for the repaving comes from the 2017 Road Repair and Accountability Act and recent ballot measures B and T, which will provide some of the $87 million the city aims to use on road improvements through 2028.

Though commutes are currently down amid the pandemic, road repairs in the coming years may come as a financial relief to drivers who find themselves making pit stops at the mechanic due to damage from potholes and other issues.

Across the country, drivers spend an extra $3 billion annually on repairs to their cars due to potholes, according to a 2016 report by AAA. San Jose drivers are no exception to that trend, Councilwoman Magdalena Carrasco said in a statement last year. “For far too long our community has suffered increased expenses to their pocketbooks due to blown tires, traffic accidents, and needed alignments,” she said. ”For our poorest families, this could be mean the difference of paying for a car repair and putting food on the table.”

San Jose keeps an interactive record of the condition of local streets, ranking each “good,” “fair” or “poor,” based on the Pavement Condition Index, another measure of road conditions used by many cities. San Jose’s overall road network averages a “fair” ranking by those standards, but a 2017 report shows its streets remained among the worst overall when compared to other Santa Clara County cities.

It’s not just the Bay Area struggling with rough roads in California. Cities of every size in the state nabbed the top spots for regions with the worst roads. 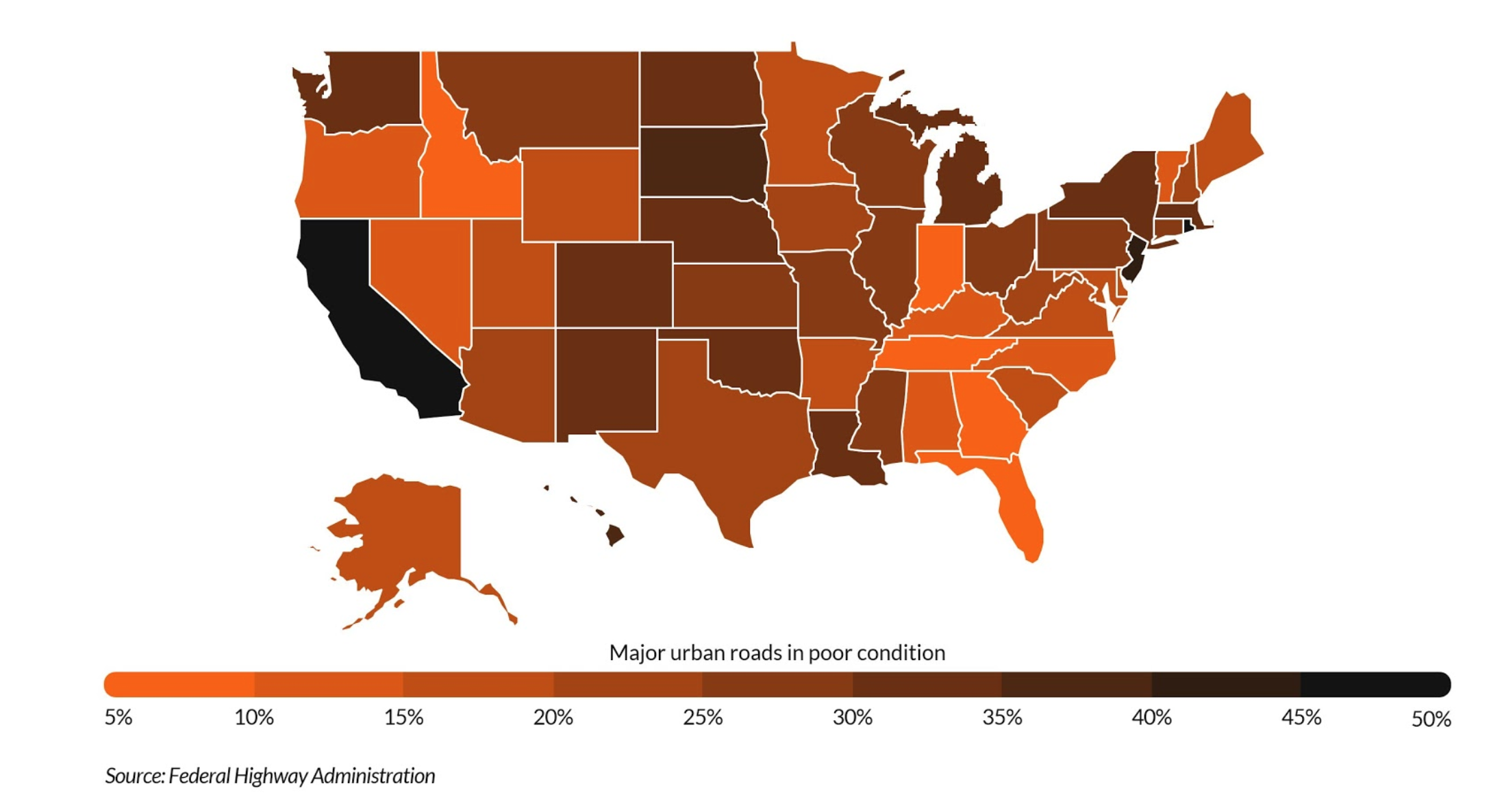 California took many of the top spots for having the worst roads in large-, medium- and small-sized urban areas, according to a recent report by car shopping application CoPilot. Image courtesy of CoPilot

Among the smallest metro areas, California cities take up the first six spots on the list of cities with poorly ranked roads by federal standards. 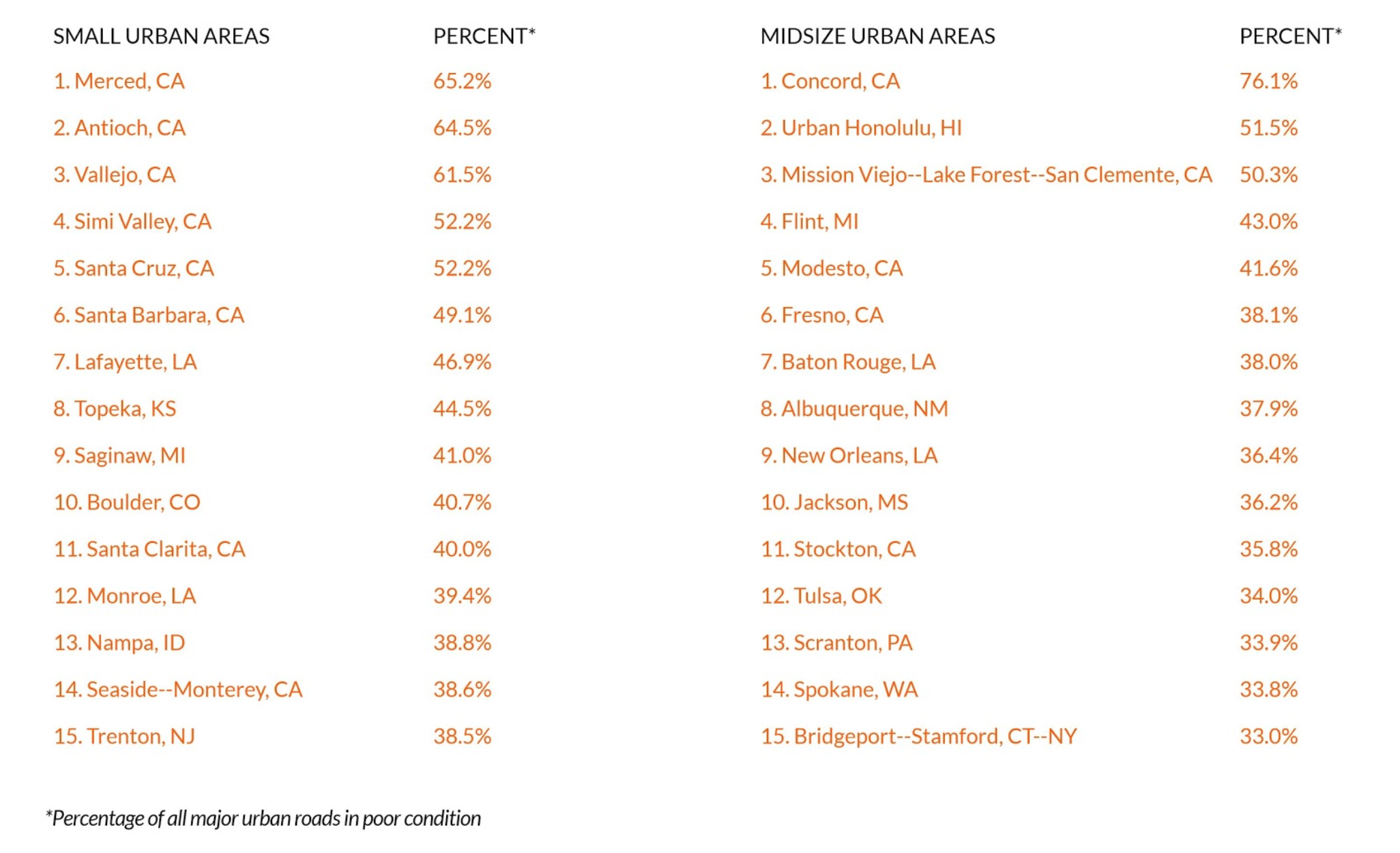 California took many of the top spots for having the worst roads in large-, medium- and small-sized urban areas, according to a recent report by car shopping application CoPilot. Image courtesy of CoPilot