With all precincts reporting, Tim Orozco holds a clear lead in the special election for San Jose's District 4 City Council seat. The labor-backed state legislative aide garnered more than 22 percent of the votes (1,855) in a field of eight active candidates.

Since the top two vote-getters will face each other in the runoff, Orozco will be back on the ballot June 23. Who he's up against appears too close to call, as of Wednesday morning. Santa Clara County's Registrar of Voters, which accounted for 86 percent of the votes, has to tally provisional and last-minute mail-in ballots.

Media exec Manh Nguyen, 62, barely edged ahead of 31-year-old attorney Lan Diep, with 18.99 percent (1,591) and 18.91 percent (1,584) of the vote, respectively—a difference of just seven votes. Both Nguyen and Diep won the endorsement of the San Jose Silicon Valley Chamber of Commerce. 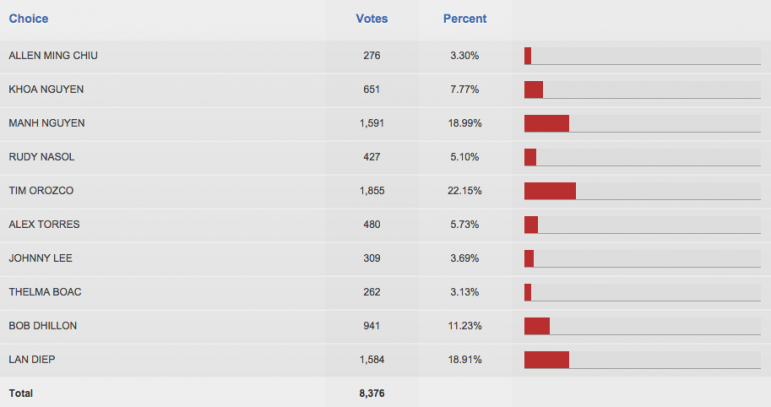 The ROV plans to announce the next vote tally at 5pm Wednesday.

The election was held to hill a council seat that opened up last fall when Kansen Chu stepped up to the state Assembly. Whoever wins will serve a partial term representing District 4—which spans Berryessa, north San Jose and Alviso—and tip the balance of power on a council evenly divided between labor and business interests.

If elected, Orozco would become the second LGBT person to serve on the council. Ken Yeager won a seat in 2000, but resigned in the middle of his second term after winning a seat on the county's Board of Supervisors in 2006.

The 55-year-old, who works as an aide to state Sen. Bob Weickowski, is endorsed by the South Bay Labor Council. He's said that he wants to settle the legal fight between San Jose and its unions over controversial pension reforms. Unions blame voter-approved Measure B for a years-long exodus of officers that's left the San Jose Police Department understaffed.

Nguyen and Diep both support the retirement overhaul, which dialed down disability and pension benefits for new hires in a bid to save money for core city services.