The special election race for San Jose’s District 4 council seat has taken a turn for the confounding. Another batch of error-laden absentee ballots went out Monday, only this time Santa Clara County’s Registrar of Voters—the agency responsible for a slew of ballot misprints in last year’s election—isn't to blame. A little black diamond noted next to each D4 candidate’s name indicates that they accepted the voluntary spending cap. But that’s not accurate for Vietnamese publisher Manh Nguyen, who’s openly admitted that he didn’t accept the cap. Who’s to blame? The county ROV says not them. City Clerk Toni Taber seems to have sent mixed messages about how to file the Form 500—a document that notes whether or not a candidate agrees to the spending cap. Attorney Lan Diep charged Nguyen with breaking city rules by not filing the form, which would presumably invalidate the $95,000-plus Nguyen raised as of last month. Diep referenced a similar misstep by Dave Cortese in the mayor’s race last year, when the county supervisor returned nigh $10,000 in donations because he waited to file a Form 500 after opting in—then out—of the spending limit. But Taber told Fly that candidates eschewing the spending limit don’t need to file a Form 500, which may conflict with Cortese’s case. Meanwhile, fellow D4 contender Bob Dhillon’s litigious past came to a head outside of a candidate forum Monday night, when scores of angry protesters propped up signs calling the twice-failed council candidate “Dhillon the Villain.” Opponents say Dhillon, who didn’t return calls for comment, hijacked leadership at San Jose’s Sikh Gurdwara Sahib, the nation’s largest Sikh temple, as well as created a rift by suing congregation members for libel. Dhillon also had a hand in running an illegal nightclub, one that cast him as a defendant in a city lawsuit to shut the place down—all while he served as chair of the Planning Commission.

UPDATE: The City Clerk's Office sent out a press release Wednesday admitting the slip-up. The black diamond shouldn't have been printed next to Manh Nguyen's name as it was on official and sample ballots, the statement reads. The city will mail errata letters to all households of registered voters and will post a notice at each polling station. 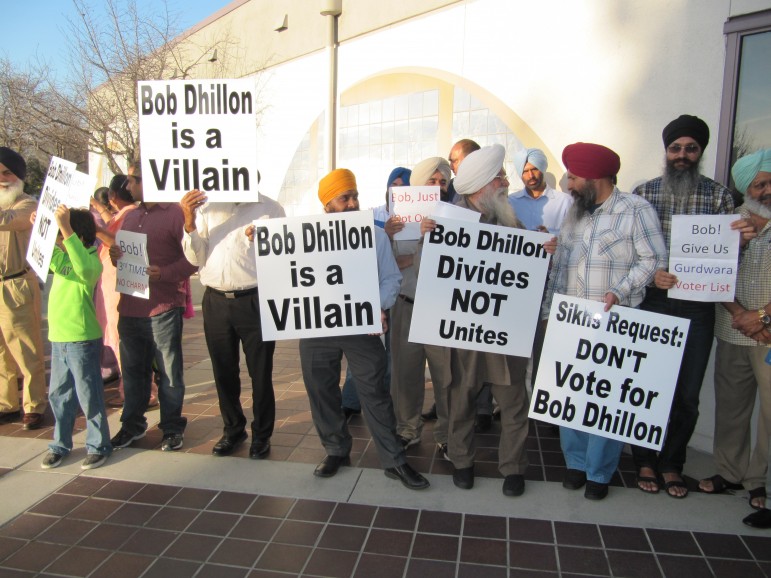 Protesters gathered outside a candidate forum on Monday.