When doctors diagnosed Jennifer Turnow, 43, with a degenerative joint disease, she determined to find a new place to live. Somewhere cheaper, smaller and handicap accessible.

“Eventually I will be disabled,” says Turnow, who has two children, aged 6 and 8. “My husband already is. So we knew that rent control would be our saving grace.”

Three years ago, the Turnows moved from San Mateo to Oak Crest Estates mobile home park, a gated 157-unit community along San Jose’s north border, hoping to spare as much of their fixed income as possible from housing costs. Even after downsizing, their modest white, blue-trimmed unit demands about 75 percent of their monthly earnings.

“We struggle as it is,” she says. “Anything more would push us over the edge. It would take up almost everything we have.”

For a family already scrimping, it would mean getting by with less food, less electricity and maybe, if it came to that, dropping some of the family’s health insurance.

For the second time in the past few years, Oak Crest tenants find themselves at odds with the park’s managers. Investment Property Group (IPG), which holds the land lease, wants to up the rent by $125 and some change—on top of the 3 percent uptick allowed by San Jose’s mobile home rent control ordinance. For tenants with monthly rents around $850, that comes close to an 18 percent increase.

Edna and Jack, a retired couple in their 70s, pay $1,000 for the mortgage on their unit and $1,300 for the lot beneath it. Eighty percent of their combined monthly income goes to keeping a roof over their heads. Paying any more could force them to move—away from their home, away from her 90-year-old mother and away from their children and grandkids.

“It’s ugly,” says Roger Whitcomb, president of the park’s homeowners association. “It puts a huge damper on just living here and for me, personally, it’s going to hurt. There’s always sort of a tension between landlords and tenants, but all of a sudden, this just ratchets it up a thousand percent because now we’re adversaries in court.”

Alan Hinman, who moved into Oak Crest nearly a decade ago, worries that IPG is trying to skirt San Jose’s mobile home rent control, passing off capital improvement costs down to residents by casting them as “service upgrades.”

“They want to add on to the rent because they said they spent money on fixing the place up,” says Hinman, who says he’s collected 2,579 pages of receipts, among other records, detailing what property management spent on the park. “These aren’t service upgrades. A lot of this stuff isn’t an improvement. This is maintenance. This is the cost of doing business.”

Both residents and park managers will present their case before a city-appointed mediator Friday. More than 100 Oak Crest tenants chipped in about $100 each to hire an attorney, Bruce Stanton, who also represents the Golden State Manufactured-Home Owners League. But not everyone can afford legal help. A couple-dozen residents appointed Hinman as their proxy.

“It’s wearing us out,” Whitcomb says, adding that he’s not sure how much energy some of the elderly residents have to work through this rigmarole every few years. Legal fees have amounted to $13,000, by his calculation.

The dispute at Oak Crest has residents of other local mobile home parks worried that the same could happen to them. Affordable housing advocates agree that the petition holds implications for the rest of Silicon Valley.

“It’s troubling because these tenants are totally at the mercy of the landowner,” says James Zahradka, an attorney for the Law Foundation of Silicon Valley. “It’s also tough because there are so many folks living on fixed incomes in these communities. They can’t easily generate any more money.”

Mobile homes are embedded in the valley’s landscape, built as quick cheap housing for the influx of residents during the region’s transformation from orchards and ranchlands to quasi-urban job center in the ’70s. San Jose, with its 10,778 units divided among 58 parks, claims the highest concentration of mobile homes of any city in California.

But rising property values increasingly threaten these parks, which are now considered a bastion of un-subsidized affordable housing in one of the most expensive regions in the country. Property owners trying to keep up with the market, however, inevitably run into a crossroad: either ramp up the rent or sell the land.

Within the past decade, 4,972 mobile home lots in California dropped off the map to make way for new development, according to the state’s Department of Housing and Community Development. Mountain View lost more than any one city—307 units in the past 20 years. Sunnyvale has lost five since 1991 and since passed an ordinance to protect the remaining few. The future of Palo Alto's only mobile home park remains uncertain. Santa Clara County and the city mustered up $16 million to preserve it, but the deal depends on the landlord's final approval.

In San Jose, the city has put mobile home park conversions on hold until policymakers figure out how to protect the predominantly elderly and low-income residents who would face eviction if they closed. Dave Bopf, San Jose’s interim assistant director of housing, says that’s a matter the City Council will work out in the coming year.

“It’s important that we create new jobs, that we increase our tax base, but do we do that by displacing seniors in a vibrant mobile home community?” Bopf asks.

Meanwhile, he says, the city expects to mediate a growing number of rent-hike petitions like those at Oak Crest. In 1986, San Jose adopted its rent control ordinance, keeping annual rent increases at 3 to 7 percent for mobile homes. For the most part, nobody tried to get around that.

“A long time passed where we had zero petitions to go beyond that 3-percent increase,” Bopf, says. “But since the rebound of the rental market, that changed. I think a lot of this is driven by the fact that rents as a whole [for the region] have increased by 46 percent in the past five years.”

After a decade without any petitions, the city has seen about two per each of the past few years. Oak Crest Estates management submitted its first in 2011, which residents talked down from $245 to $5. Hinman says gas leaks once left tenants without heat in the dead of winter. Sewage stops up aging pipes. The pool grew so moldy that the park had to replace it entirely. Aging eucalyptus trees along the perimeter drop heavy branches during storms—one even crushed a resident’s $800 fountain. Not long after park owners remodeled the clubhouse, a wheelchair-bound tenant got trapped in an apparently ADA-noncompliant bathroom stall because she couldn’t turn around.

“It is truly dangerous,” says Hinman. “We feel that it’s only a matter of time before somebody is going to get seriously hurt or killed. These are elderly people, some are in wheelchairs.”

Of course, property owners are entitled to a return on investment, Bopf points out, which creates inherent tension with the people who live there and may have to foot the cost. At Oak Crest, IPG management spent about $500,000 remodeling the clubhouse, repaving most of the roads and other projects. But it’s up to the city’s hearing officer to determine whether those upgrades were owed to the residents, or if they constitute a value increase that merit higher rents.

“We didn’t know that IPG would repeatedly come at us for these huge increases,” Turnow says. “We budgeted for those 3 percent increases—we can handle that. If they add on to it every few years, though, it could force us to move.” 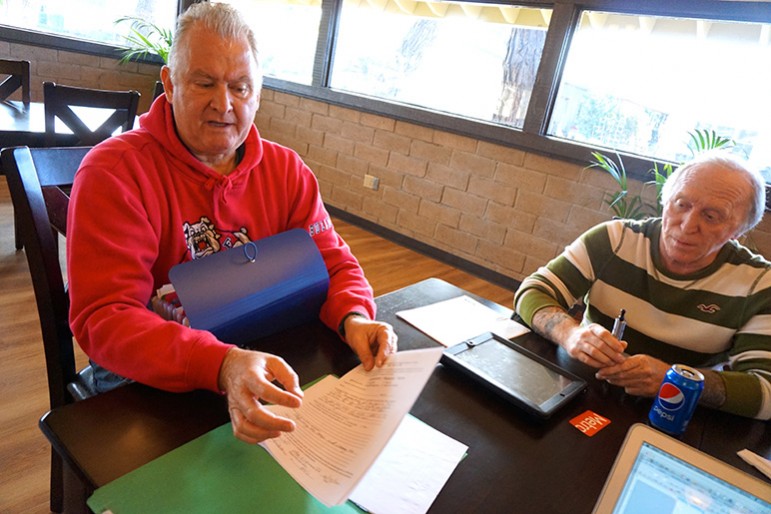