Apartment rental vacancies are climbing in Mountain View, which opened the door for a discussion Monday night to halt the city’s tenant control protections—a prospect that residents quickly quashed, at least for the time being.

Mountain View’s rent control ordinance was passed by voters in 2016, and includes a stipulation that allows the law to be suspended if the average annual vacancy rate of rent-controlled apartments rises above 5 percent—a caveat uncommon among rent control ordinances in the Bay Area. Amid the Covid-19 pandemic, vacancy rates have indeed risen steadily. Among the city’s rent-controlled units, the vacancy rate has risen from 6.1 percent in July to 9.3 percent in November, according to real estate data firm CoStar.

But even if suspending rent control protections is allowed, Mountain View residents showed up Monday to tell members of the Rental Housing Committee that even mulling the decision was the wrong move. “Just because you can do this, doesn’t mean you should,” resident Eva Tang told committee members. “Mountain View may as well adopt a resolution saying that we hate poor people.”

The debate Monday focused on whether to put the question of suspending rent control on a future agenda in response to a proposal by committee member Julian Pardo de Zela, who said rent control is keeping landlords from renting vacant homes.

“There are landlords who have said very publicly … that because of the huge vacancy rate right now, they are unwilling or reluctant to rent certain units in Mountain View,” Pardo de Zela said. “They’re afraid they’re going to get stuck with a very low-base rent.”

To suspend rent control, the committee would first have to conduct its own survey of the city’s rent-controlled apartments and the vacancy rate would have to remain higher than 5 percent for at least a year.

Even so, none of the 18 residents who chimed in during the meeting’s public comment period supported the proposal to keep discussions alive around suspending rent control.

Resident Bee Hanson said that if rents became unaffordable, tenants could lose the only shelter they have during a surge of Covid-19 cases. “I don’t know how to explain to you that you should care about other people,” Hanson said, quoting Dr. Anthony Fauci, the federal government’s top infectious disease doctor.

Edie Keating, also a resident, worried landlords would take advantage of the opportunity to raise rents for their lowest-income tenants.

“Why not do an eviction-by-rent-increase to get rid of those who are the most economically fragile?” Keating asked rhetorically. “Landlords would have a field day if the (rent control law) were suspended … this is bad timing.”

Though committee members almost uniformly said they wouldn’t likely raise rents right now anyway, some were still prepared to start the process. The discussion and the required study could help them better understand the current state of rent-controlled housing in the city and allow the committee to make changes to the ordinance, committee member Matt Grunewald said.

“This is just about (exploring) what options do we have,” Grunewald said. “This is a unique time where we have a window to change some things.”

Others, including committee members Nicole Haines-Livesay, Susyn Almond and Chair Emily Ramos, agreed that pushing the discussion forward now would be too drastic a step during a chaotic time.

“I cannot justify to myself to do this during a pandemic,” Ramos said. “In this time, when so many people are becoming vulnerable… I cannot move forward with this.”

And even though he proposed putting the matter on the agenda, Pardo de Zela assured residents that if the question suspending the city’s rent control law did come up for a vote now, he’d be on their side.

“I would vote against suspending the whole thing, because that would be the sledgehammer,” Pardo de Zela said. “I think we have to educate ourselves and then make a decision, instead of just reflexively acting.”

Pardo de Zela made a motion to put the item on the agenda.

No one seconded the motion.

The Mountain View City Council voted last week to spend $980,000 to install 2,600 “No Parking” signs along 110 miles of the city’s streets as part of its controversial RV ban. 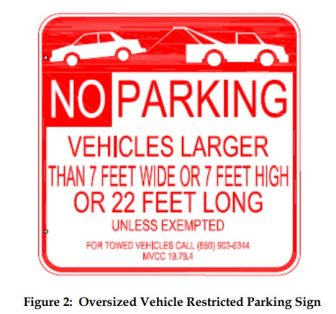 The ban, passed by 56 percent of voters last month, prohibits oversized vehicles from parking along streets less than 40 feet in width. The city will begin installing the signs in April, after which Mountain View police will be able to issue fines and have non-compliant vehicles towed.

The Law Foundation of Silicon Valley, along with the ACLU of Northern California, said last year that they would be prepared to challenge the ban were it to become law.

“We are in touch with vehicle residents who want to challenge the ban,” said Michael Trujillo, staff attorney with the Law Foundation, on Monday. “We’re collaborating with them and deciding on the best course of action.”