Near an empty apartment complex in Mountain View, set to be demolished to make way for million-dollar homes, Dustin Fehrmann looked on from outside his RV, where he lives. “I really can’t afford to live in a house here, or commute back and forth from where I could be living,” he said.

Measure C, a 2020 ballot measure, could reduce his options for where he settles in for the night, however. The measure would enact Mountain View's controversial Narrow Streets Ordinanc, and would ban RVs like Fehrmann's from parking along the majority—or 78 percent—of the city’s streets.

Commonly referred to as the “RV ban,” the measure was narrowly approved by Mountain View City Council in September 2019. The ordinance was halted when housing activists gathered more than 4,000 signatures and submitted a petition to the Santa Clara County Registrar of Voters in November. From there, the city had two choices: remove the ordinance, or put it on a ballot for voters to decide. Council members voted in January to put the ordinance on this year’s general election ballot.

Fehrmann said he needs a place to park where it is safe and close to where his son and son’s mother live. “This is a great place for kids to grow up,” he said. “I know that I can go into work and won’t come home to a burglary.”

But when Fehrmann does find occasional work, he comes back home to tow notices stuck to his window. “What that does to my anxiety and my mental health, it’s not fair,” he said. “I don’t do drugs, don’t drink or any of that. I’m just trying to work and survive.”

Mountain View Mayor Margaret Abe-Koga, who supports Measure C, said she and other residents are not without compassion for people in Fehrmann’s situation.

The city now has more than 100 spots in its safe parking lots, many of which accommodate oversized vehicles such as RVs, Abe-Koga said. Residents in the lots also get assistance with transitional services from Community Services Agency, a social work nonprofit serving Los Altos and Mountain View.

“We have the largest program in the county, even bigger than San Jose’s,” Abe-Koga said, noting that San Jose’s population is more than 10 times that of Mountain View. In addition, the city recently accepted a $12 million grant from the state to build modular housing for about 300 people by the end of the year.

With the city’s homeless population at roughly 600 people, according to city data from last year, the mayor said these programs should make a big difference in the number of people living in RVs. “We’re going to be making a huge dent in reducing homelessness,” Abe-Koga said. “If the number stays stagnant, we’ll be able to help our entire population.” 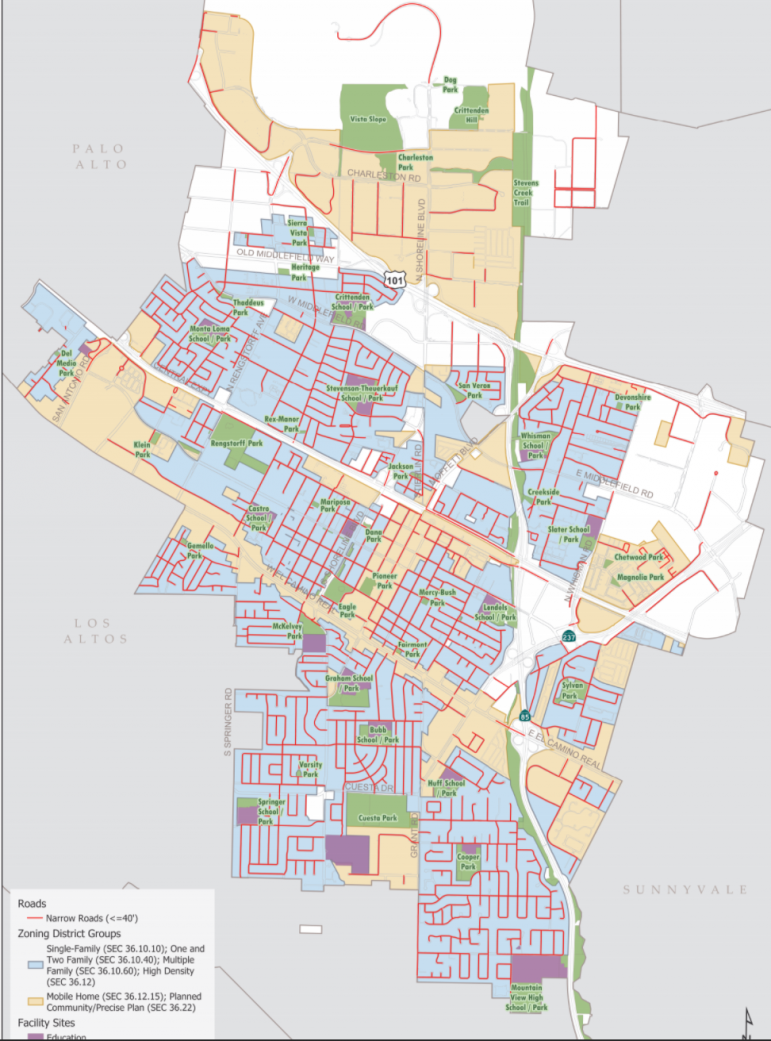 Robert Cox, chairman of the city’s Planning Commission and a member of the Yes on C campaign, said he first supported the measure when he saw RVs parking on the bike lanes along Shoreline Blvd. near Eagle Park.

Yes on C signs have popped up around the city in droves, and Cox said that’s because the relatively inexpensive signs are a staple of that campaign.

Indeed, Janet Werkman, a volunteer with the No on C coalition and treasurer and its campaign committee, said they’ve been campaigning door-to-door and handing out fliers to residents and that many residents are opposed to the ban.

“This is just the visible part of this housing crisis, of all the human misery that’s been created by this enormous wealth gap,” Werkman said. “The wealth gap here is greater than almost any place else on the planet.”

Mountain View resident Jerylann Mateo, who lives nearby a street where many RVs are parked, said she supports the ban.

“RVs have posed a lot of danger on the neighborhood streets,” Mateo said. “I personally have dealt with almost being hit by other cars after I’ve tried to turn onto a main street with RVs blocking the view.”

Mateo added that she’s seen garbage left on the sidewalk and on people’s properties by RV residents. 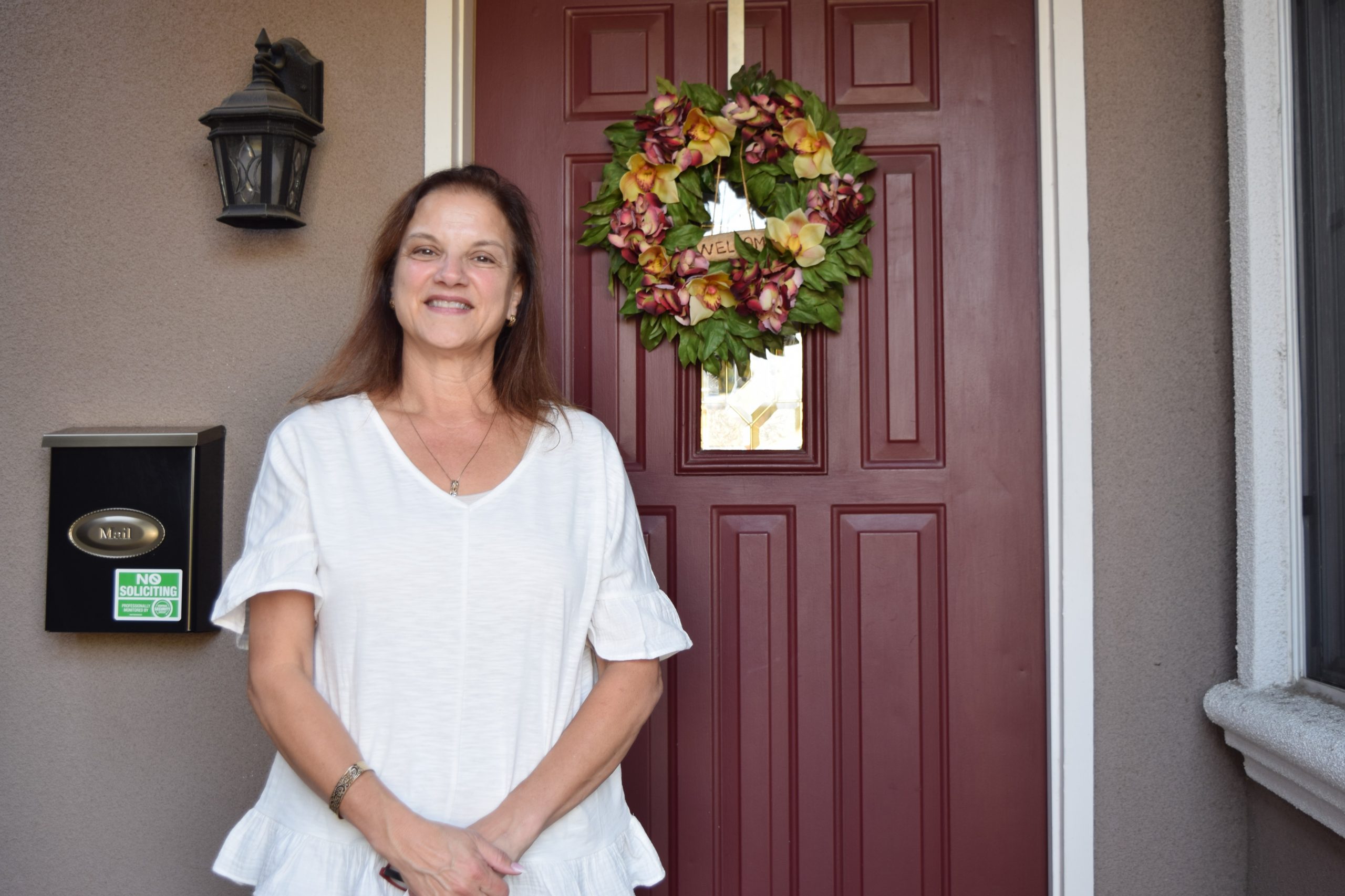 Jerylann Mateo stands outside her home in Mountain View. (Photo by Sonya Herrera)

Councilmember Lisa Matichak, who supports Measure C, said a lot has changed since the council approved the original ordinance. For instance, there are more authorized parking spots—including spots for people to park their passenger cars near their RVs—though the lots are currently at capacity.

“We do need other cities to open up safe parking lots,” Matichak said, noting that the City of Palo Alto recently opened up a safe parking lot. “I do feel we are a caring community here and we will help folks manage through this transition.”

Abe-Koga and Matichak are both running for re-election to City Council this year while a few housing activists who petitioned to halt the ordinance are also running for council, including Alex Nunez and former mayor Lenny Siegel.

Nunez said despite his experience talking with residents, many of whom were willing to sign the petition to halt the ban, he’s still uncertain about whether the measure will fail or succeed. He expects a narrow outcome either way.

“It’s been such a divisive issue for the community,” Nunez said. “We hear a lot from the proponents who are in support of this, but when we were still having in-person meetings, the vast majority of people who would show up in person to these council meetings were opposed to the ban.”

Siegel, the lead activist gathering signatures for the petition, said organizing began at the council’s first reading of the Narrow Streets ordinance. Siegel had voted against a similar ordinance as mayor in 2018.

“This is something where they’re doing it all over town, and they’ve redefined what a narrow street is,” Siegel said. “They’re pretending it’s about traffic safety when, in fact, they just don’t want to see poor people on the streets of Mountain View.”

Michael Trujillo, a staff attorney with the Law Foundation of Silicon Valley, said the ordinance is unconstitutional on multiple fronts, most notably according to the 8th Amendment, which prohibits cruel and unusual punishment. The amendment was crucial to the Martin v. Boise case, in which a judge ruled it was unconstitutional for cities to ban sleeping on public property without reasonable alternatives.

“The reality is in Santa Clara County right now, there is no shelter space available on a walk-in basis,” Trujillo said. “If the city were to start ticketing people for sleeping in their RVs when they don’t have that option to sleep indoors … we see that as a violation of the Martin v. Boise decision.”

The Law Foundation and ACLU of Northern California last year threatened to file a lawsuit against Mountain View should the ordinance become law.

Whatever happens, Fehrmann, looking down the street at a Yes on C sign posted on a nearby lawn, said he would remain in the area for as long as possible to remain close to his family. “I can’t leave this area, because I know that’s where they need to be,” he said. “There’s no crime in this city, so if this is criminal, trying to live …”

Fehrmann stopped mid-sentence and lifted his hands in exasperation.