Felipa Pineda stood at the intersection of Monterey Road and Curtner Avenue in San Jose where her daughter Vanessa Ann Arce died in a hit-and-run in April.

As she spoke, Pineda was holding her granddaughter, one of Arce’s five children, in her arms. They took turns comforting each other as they reflected on the family tragedy. 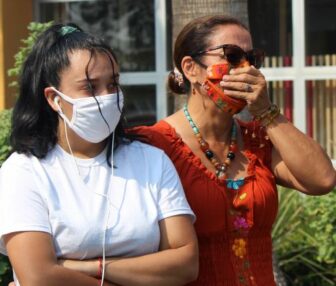 aughter were joined by San Jose police and Councilmember Maya Esparza on Thursday to plead with the public to help find the person responsible for Arce's death four months ago.

Arce,37, was in a wheelchair crossing the intersection at 11:30pm April 1 when a driver of what is believed to be a white 2004-2010 Mercedes-Benz CLS hit her and drove off. She later died in the hospital.

Police released a surveillance video  of what they believe to be the hit-and-run vehicle on Twitter Thursday.

Arce was a member of the Black Berets -- an indigenous and Chicanx advocacy group based in San Jose. The Black Berets, along with Arce's family and friends, will be marching from the Monterey/Curtner intersection to San Jose City Hall on Friday to honor Arce's life and demand justice for her. The rally at City Hall is to start at noon.

The investigation for Arce is still open, police said. Police are encouraging anyone with information to call the Police Department's Traffic Investigations Unit at (408) 277-4654. Those wishing to remain anonymous can call (408) 947-STOP (7867) or submit a tip online at https://svcrimestoppers.org.

The vehicle would have damage to the front and left side, police said.

“(They) took off, left her, didn't check to see if she was alive or dead,” Pineda said Thursday.

Arce was left at the scene with severe injuries before she was transported to a hospital. After a few hours, she succumbed to her injuries and was pronounced dead on April 2.

“I know that nothing will bring my daughter back,’ Pineda said, struggling to talk past her tears. “But bringing the individual or individuals to justice is what we want.”

Arce's mother said finding the driver would also help her and loved ones find closure.

“We are devastated by this horrific incident,” she said. “We would like justice and I refuse to have this be a cold case for my daughter.”

San Jose police were able to find a video of what they believe to be the car from a nearby gas station's security cameras. But despite a nearly months-long investigation and signs posted around the Plant Shopping Center by Arce's loved ones, police have not been able to track down the culprit or the vehicle.

“This has been a very dangerous intersection this year as well as the Monterrey corridor here in the area,” SJPD spokesperson Christian Camarillo said.

At that intersection, there have been four traffic-related deaths in 2021. And there were many more along Monterey Road, Camarillo said.

Not all were pedestrians crossing on their designated crosswalk like Arce, however. Some were bicyclists and others were car-on-car crashes, and sometimes it was a pedestrian who wasn't using the crosswalk.

“So, we really want to make the public aware. It's going to take, you know, not just pedestrians but motorists as well (to stop these deaths)," Camarillo said.

Esparza, who represents the district where Arce was killed, said she submitted a memo to the city council asking for more safety tools, like recording cameras at the intersection that would allow police to capture the license plate of a hit-and-run driver, for example, or barriers along the road so that pedestrians are dissuaded from jaywalking, among other things.

“Piloting a program to install cameras in this intersection is something the city has never done before,” Esparza said.

The council member also asked the city Department of Transportation to look at synchronizing the crosswalks with the traffic lights.

The city has been looking at ways to improve Monterey Road, as well as other dangerous roads in San Jose like Senter and Tully roads, through the national Vision Zero project that seeks to eliminate traffic-related deaths.

“Unfortunately, District 7, District 3 (Downtown San Jose), and District 6 have the most dangerous streets for pedestrians and cyclists in the city,” Esparza said. “So that's why the city's done some efforts."

Pineda said she wants her daughter to be remembered as someone who always walked in with a smile on her face and sought to make people laugh at any opportunity.

“She was only 4 foot 10 and she was a little firecracker,” Pineda said, her voice choking. “Oh, my baby girl, my baby girl.”

Those who provide a tip that leads to an arrest in the case will receive a cash reward, Camarillo said.

Also this week, police said a man also struck by a hit-and-run driver on Monterey Road in San Jose earlier this month succumbed to his injuries at a hospital Wednesday.

The collision was reported shortly before 5pm Aug. 4 in the 2000 block of Monterey Road.

The man, whose name is not immediately being released, was walking across the northbound lanes of Monterey Road outside of a crosswalk when a silver 2006 Chevrolet Trailblazer struck him. He was taken to a hospital and died there Wednesday.

Later on Aug. 4, police tracked the Chevrolet driver, Roberto Figueroa, to a home in San Jose and arrested him, according to police.

Jana Kadah is a reporter with Bay City News.