It was one of the oldest surviving murals in San Jose.

Painted in 1985 by an artist named Jose Mesa V. and an ensemble of East Side youth, the intricate wall art depicted the history of Chicano people, from the Aztecs of old to the laborers led by Cesar Chavez. The detailed pictorial covered the side of Payless ShoeSource at Story and King roads, the epicenter of the low-rider movement and the civil rights marches that spawned the United Farm Workers union.

Sometime before dawn Wednesday, a handyman slathered a thick coat of gray paint over every part of the panorama except for a small icon of the Virgin de Guadalupe. The next day, she disappeared, too, under the same drab veneer.

The founder of Souleros Ball—a group that aims to preserve Chicano and indigenous culture—says the montage acquainted him as a kid with the faces of legends, revolutionaries, artists and activists that he would later read about in books: Pancho Villa, Emiliano Zapata and San Jose-raised playwright Luis Valdez.

“A lot of Chicanos growing up in East Side got their first pair of shoes at Payless before they could afford brand names,” Valle says. “That’s probably how I first got to know the mural. It’s a pretty damn big wall, so you’re forced to take it in.” 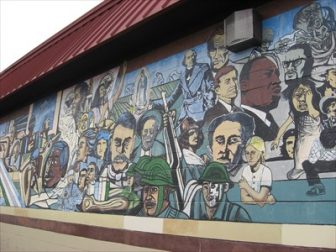 Another view of the mural. (Photo via Waymarking.com)

When Payless closed its East Side shop in 2017 after filing for bankruptcy, Valle and several other concerned residents began reaching out to the property management firm, CBRE, and City Hall. But the company stonewalled them.

The office of Vice Mayor Magdalena Carrasco, whose council district encompasses the East Side, had no better luck. But activists say her office kept them out of the loop. Even if Carrasco’s staffers didn’t manage to reach the building’s owners, community members say they would’ve liked to know that some effort was made in the past year.

Communication has improved now that the mural’s gone for good, they say. And while it’s too late for the Payless wall art, there may still be some recourse.

On Thursday, Carrasco’s team met with Valle and San Jose’s Director of Public Art Michael Ogilvie to talk about how to respond to the sudden loss of the Mural de la Raza. Though there’s no saving the visual history and cultural way-finder, Valle learned that the community might have some recourse.

Under federal law, the Visual Artists Rights Act of 1990, and state law, the California Art Preservation Act of 1979, muralists have some rights to the walls they painted. The overlapping statutes prohibit the desecration, alteration or destruction of public art without giving the artist at least a three-month notice.

Valle and the city officials he met with today are unsure if the property owner did that—or if the artist is even alive. “We’re still trying to figure this out,” says Frances Herbert, the vice mayor’s chief of staff.

She says the CBRE-managed property is in escrow, but she’s not yet sure who’s buying it. This morning, she plans to meet with the Santa Clara County Assessor’s Office to see if she can track down the person behind the LLC so she can send a legal notice about the rights of the artist—or, if the artist is dead, to his next of kin.

Carrasco, who majored in Chicano art studies in college, says she feels as heartbroken as Valle about the mural’s unceremonious erasure. “I am devastated like many in our community about the loss of Mural de la Raza,” Carrasco wrote on Facebook Thursday. “My family and I recognize the importance this mural has had on our understanding of this area and our history. It is unacceptable to lose our understanding of Chicano art and culture in our precious East San Jose.”

Herbert says it may have been on private property, but there are certain protections that should have been upheld. “It’s really unfortunate that they tried to destroy something that’s been on that wall since 1985,” Herbert says. “It’s a huge loss.”

Valle says he feels protective of the Chicano murals in San Jose, many of which have disappeared—including one that adorned the side of Chaparral Supermarket by Roosevelt Park. Though not an artist himself, Valle maintains a mural painted outside Pop’s Mini Market by an old friend, Frank “Pancho” Torres, who helped Mesa V. complete Mural de la Raza decades prior.

To Valle, what happened to Mesa V.’s work has been a wake-up call. “We need to stand up for our culture and our history,” he says. “We can’t just let our murals disappear.” 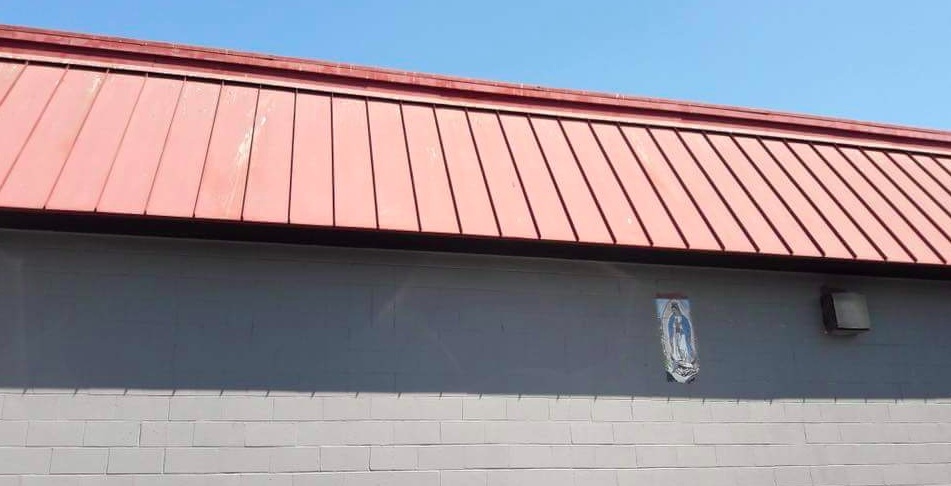