The 15-by-85-foot tribute to Chicano culture on the old Payless ShoeSource building at Story and King roads took two months of 15-hour days and 50 youth volunteers to complete in the summer of 1985.

It took only an hour or so to erase.

By the time Velasquez heard about the Aug. 29 pre-dawn cover-up, the detailed display of folk legends and civil rights leaders had been obscured for days by a thick layer of tan paint. However, because state and federal law requires landlords to notify muralists before altering or removing their handiwork, the 69-year-old Oakland artist says he plans to take the offending property owner to court.

“It was a shock for us,” his wife, Juanita Velasquez told San Jose Inside in a phone call. “That was our initial reaction. We had no idea this was happening.”

On Sunday, Velasquez and his wife drove from the East Bay to San Jose to visit the site of his beige-washed handiwork, which had since been tagged with lime-green scrawl that read, “Down 4 My Raza.” About 100 artists and community members joined the family in solidarity. Though saddened by the loss, the artist says he was touched to see how much his work meant to folks who grew up in San Jose’s largely Latino East Side.

Folks like Jose Valle, who works for the local nonprofit Silicon Valley De-Bug. When he heard about a year ago that Payless would close its East Side store after filing for bankruptcy, Valle and other activists asked Vice Mayor Magdalena Carrasco’s office to help them contact the property owner and figure out how to preserve the mural.

But Carrasco’s chief of staff, Frances Herbert, says her office had no luck. CBRE, the property management company, didn’t relay their message to then-owner 2048 Partners LLC—the company that reportedly painted over the mural—or its manager Peter Aljouny. Months passed with no news, say residents advocating for the mural’s preservation.

Once the mural was painted over last week, the community mourned and then sprang into action. Carrasco’s staff resumed efforts to track down the people behind A7 Story LLC, the building’s new owner. Artists and residents helped find Velasquez after watching and reading news reports about the mural’s erasure. And city officials began talking about ways to protect San Jose’s surviving cultural markers, which in East Side often sprang up organically in places overlooked by nonprofit grant-givers and other institutional funders of public art.

Enedina Cardenas, a Cupertino-based attorney who grew up admiring “Mural de la Raza,” says San Jose’s elected leaders should do more to preserve the city’s cultural landmarks—particularly in today’s political climate. “It concerns me that these things are going away when there’s an administration in the White House that’s actively trying to erase years of our history here,” she says.

In a letter to city officials that San Jose Inside published as an op-ed, Cardenas talks about the pride she felt as a child and the daughter of immigrants in seeing her heritage represented throughout the city.

“Public art has a way of developing and fostering a sense of community,” she wrote in the Sept. 3 note to Carrasco. “Artists depict their observations of the times and memorialize pivotal moments in history. Public art, such as artist Jose Mesa Velasquez’s piece, acknowledged a group. It validated my community. Growing up, I don’t recall having books available to read about Mexican-American culture in elementary school. It was important to see reminders of my culture and heritage, such as this mural. I didn’t realize what an impact this art had on me until I learned what happened earlier this week.”

Cardenas questions why the city, with all its resources and clout, couldn’t save the mural, considering the story it told about East Side through indigenous and religious iconography and the faces of multi-cultural historic figures such as Cesar Chavez, Dr. Martin Luther King Jr., Mahatma Gandhi and President John F. Kennedy.

“Mr. Velasquez and the other muralists will probably have their day in court,” she writes in the stern but heartfelt missive. “Damages may be awarded. And hopefully, a new mural can be resurrected to replace the one lost. But it is clear that as a community, we need to take preemptive measures to preserve the remaining art in San Jose, to respect the artists’ work and point of view [and] to ensure this does not happen again, especially when this loss was preventable in a swift legal process.”

A big loss for our community. @CityofSanJose @CM_Magdalena and I will work w/local artists to bring a new mural to life. #WeAreSanJose https://t.co/AhPhA8SslU

“Mural de la Raza” may be gone, Cardenas concludes, but all is not lost.

“I am hopeful for one thing,” she says. “The events that took place sparked an outrage in the community, outrage that I hope will lead to action. Art has a way of bringing people together and fostering dialogue. Let’s use this momentum to foster, grow, and preserve the strong heritage our local artists have worked to create.”

Valle, who founded a club called Souleros Ball to promote cultural wayfinders like “Mural de la Raza,” agrees that it’s important to look forward and to amplify the stories that muralists like Velasquez sought to convey. The De-Bug organizer plans to team up with other community groups to host a Sept. 16 gathering at the “Mural de la Raza” site to raise money for a new work of art to replace the one that was lost.

“We want to turn this into a positive thing and have a celebration with food and music,” Valle says. “Hopefully, it can also be a way to show that we mean business, that this isn’t something we’re just going to let go.” 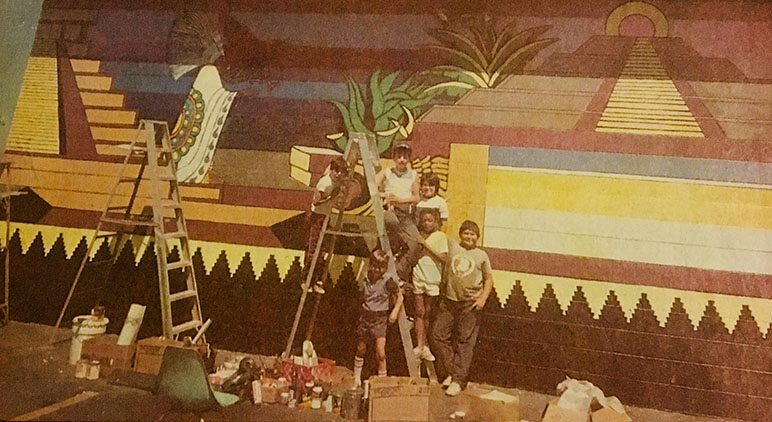