After environmental concerns forced its relocation, the family of civil rights leader César Chávez has announced its support for the Breeze of Innovation’s proposed move to Downtown San Jose’s Plaza de César Chávez.

The iconic art sculpture and winner of the 2021 Urban Confluence Silicon Valley international competition was originally slated to be built at Arena Green, next to SAP Center and alongside the Guadalupe River.

The kinetic structure honoring the San Jose light tower of more than a century ago worried environmentalists who feared it would cause birds to crash into the LED-tipped illuminated rods, disrupt salmon swimming in the river and cause light pollution.

The original location was approved unanimously by the San Jose City Council, which will have to approve the location change before it can be considered official.

Breeze of Innovation was designed by Australia-based SMAR Architecture Studio, a team led by Spanish designer Fernando Jerez. It was selected out of 963 submissions in 2019 in a juried international competition. The civic monument is intended to pay homage to the San Jose Light Tower, which stood at the corner of Market and Santa Clara streets from 1881 to 1915.

Breeze of Innovation’s raised structures support walkable viewing platforms and a cafe, light up at night and be visible to travelers flying into Mineta San Jose International Airport. To be located at Market and San Fernando streets, the installation will incorporate a series of ramps and observation decks and interactive lighting.

The project is privately funded by donors to the nonprofit San Jose Light Tower Corporation. It has raised $3 million of the approximately $150-200 million initially anticipated.

“We as a family and an organization like big ideas,” said Andrés Chávez, executive director of the National Chavez Center. “To have the farmworkers represented by their own union was a big idea itself.” The 28-year-old grandson of the labor leader said he hopes the effort will “further educate people about his work and his impact.”

“We look forward to something significant that honors César, not just a place named after him,” he told San Jose Inside. 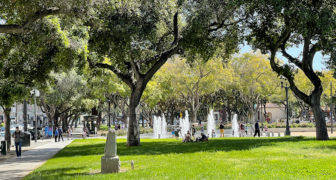 Critics say the art piece is unnecessary and wastes valuable public land. Plaza de César Chávez is used for outdoor concerts and activities such as San Jose Jazz Summer Fest, Music in the Park and Christmas in the Park.

“We made this decision because of challenges associated with Arena Green, including environmental concerns with the riparian corridor, regulatory challenges and air traffic noise,” said Borkenhagen.

Breeze promoters say they will work with producers to improve the park experience for event attendees. “While searching for an alternative Breeze of Innovation location, we revisited every possible publicly owned and privately owned site in and around downtown San Jose and came to the unanimous conclusion that Plaza de César Chávez, the cultural and historic center of downtown San Jose, is the best location for Breeze of Innovation.”

Architect Jerez told San Jose Inside he’s fine with adapting the design to fit part of the 2.5-acre park, even though it will likely have a smaller footprint than it could have occupied at the 14.3-acre Arena Green location.

The plaza dates back to 1797 as the Spanish Pueblo de San José de Guadalupe’s plaza mayor, making it Northern California’s oldest public space. California’s first legislature met from 1849 to 1851 on the park’s eastern edge, and from 1889 to 1958, it was the site of San Jose City Hall. “Plaza de César Chávez is, and always has been, the center of our city,” Borkenhagen said.

“We have a unique opportunity to build a public space in downtown San Jose that will function as the artistic soul of Silicon Valley. It will also make the city of San Jose thrive while inspiring locals and tourists alike.”

“Our aim is not to simply transform Plaza de César Chávez into a world-class urban park, but also to incorporate elements that show deep respect for Cesar Chavez, one of the most important American civil rights leaders of the 20th Century,” Borkenhagen said. “Our meaningful community dialogue began with members of the family of Cesar Chavez including Chavez Family Vision and the Cesar Chavez Foundation. Both enthusiastically support our vision and have committed to working cooperatively with us.”

Another urban champion weighed in on the potential benefits. “Placemaking is crucial for the revitalization of downtowns. To bring an iconic landmark like Breeze of Innovation close to other public amenities could be a catalyst and add fresh vibrancy to San Jose’s core,” Alex  Stettinski, CEO of the San Jose Downtown Association said.