We didn’t stop by the South Bay Labor Temple this year … their antipathy for independent media makes Donald Trump a kumbaya-er by comparison.

The Laborites usually block us at the door or order us to leave. Since our spies inside told us the mood was particularly somber on Tuesday, we didn’t even try and sneak in this year. We figured a journalist would get better treatment at the Saudi Arabian embassy.

As labor council exec Ben Field tried to put the best face on things by referring to his comrades as “brothers and sisters,” their shining hope, council-vote-misser and forum-skipper Don Rocha was—imagine that—a no-show.

One elected official who was there called the Santa Clara County supervisorial candidate “the laziest guy in politics.” And he was going down in flames.

The Fly, however, did try to reach out to Rocha to see where he’d be spending the evening, but the lame duck councilman played to our heartstrings, saying he wanted to spend his night with family and friends.

Rocha opponent Susan Ellenberg, meanwhile, was over at Hapa’s Brewing Company in Midtown, and barely an hour after the polls closed, celebrated her “presumptive” victory, as her effusive husband, Steve Ellenberg, boldly declared.

The well-attended bash drew a steady stream of well wishers, from District Attorney Jeff Rosen to waterboarder Gary Kremen. Even prominent Palestinian Americans showed up to cheer the Zionist, AIPAC-supporter’s victory. Middle East peace, swords into plowshares and all that.

Garbage haulers, cemetery operators and public safety unions spent heavily to hit Ellenberg with attack mailers, to little effect. With all precincts reporting and 52 percent of the ballots counted Wednesday morning, the school board president maintained a double-digit lead over Rocha—56.99 percent to 43.01 percent—in the District 4 race to succeed Supervisor Ken Yeager. An updated count is expected at 5pm.

Ellenberg ran as an independent, withstanding fierce opposition from labor without the endorsement of the Silicon Valley Organization, one of the region’s most powerful business advocacy groups.

The San Jose Unified School District board president finished ahead of the pack in the June primary after sexual harassment and misconduct claims knocked one of her rivals, ex-Santa Clara Councilman Dominic Caserta, out of the race and out of the local political sphere entirely. The allegations changed the dynamic of the D4 race and, according to some observers, boosted Ellenberg’s chances as the only female candidate.

“This is widely considered to be the ‘Year of the Woman,’” noted Melinda Jackson, an expert on political identity and chair of the San Jose State Political Science Department. “And this is really the first post-#MeToo, post-Trump election, which is why we’re seeing a record number of female candidates, who probably do stand to benefit from that.”

According to the League of Women Voters, Americans on Tuesday sent more female candidates to government office than ever before.

“We could not be prouder to see so many women elected to public office this year,” League President Chris Carson crowed in an email to reporters on Wednesday. “This is an inspirational moment for women, and we will not stop until the number of women in elected office reflects the makeup of our communities.”

As a county elected, Ellenberg would represent a critical swing vote on the five-member Board of Supervisors, which has long leaned in favor of labor interests. She would preside over an agency with more than 20,000 employees who serve a region of nearly 1.9 million constituents with a $7 billion annual budget.

Throughout her campaign, Ellenberg has said she would focus on tackling homelessness, improving healthcare, bringing transparency to the county’s troubled jails and improving outcomes for foster youth. 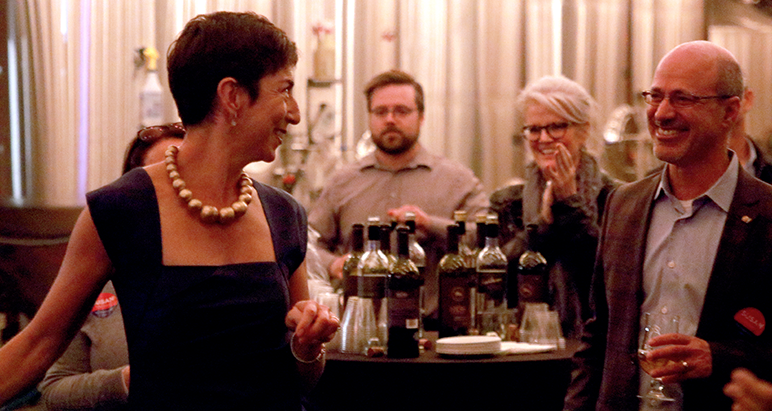 Susan Ellenberg smiles at her husband, Steve, as early returns put her in a commanding lead in the county race.