Van Le has been on the warpath against San Jose Councilman Tam Nguyen, accusing the District 7 incumbent of breaking election laws, sympathizing with commies and, just this week, committing voter fraud.

So it got a little awkward, to say the least, when he realized that the universe would bring them together on election night.

The two rivals watched the returns in suites 407 and 408, respectively, of an East Side strip mall. Le, an East Side Union High School trustee and one of six challengers in the race, quelled the tension by helping her husband set up the buffet: two tables of Vietnamese, Thai and Chinese noodles and grass jelly rounds for dessert.

Le said she didn’t realize they’d be neighbors for the night until organizers already booked the place and sent the invitations.

Thuc Do—a glass repairman who donated his dance studio-slash-Asian-American community center venue for Le’s bash—said he supported Nguyen in 2014 but switched teams after the incumbent took a trip to Vietnam six months into his term.

“Tam betrayed us,” exclaims Do, taking a break from setting up red-and-green laser lights before guests began to trickle in.

The next suite over, Nguyen arrived a little later, having just wrapped up a council meeting. On the other side of the wall separating Le’s and Nguyen’s parties, volunteers set up a near-identical spread of various noodles and jelly sweets. 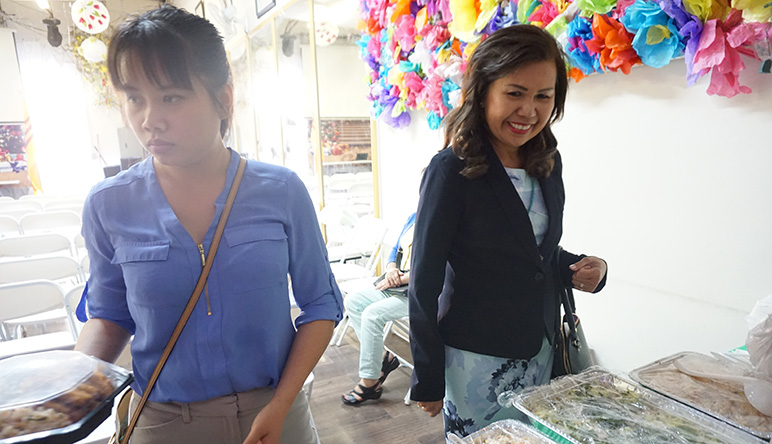 Van Le helps set up the buffet tables before the guests arrive. (Photo by Jennifer Wadsworth)

Le exuded optimism at the start of the night, though the first tally of mail-in ballots with no precincts reporting showed her in third with just shy of 16 percent of the votes behind Maya Esparza with 19 percent and Nguyen with 35 percent.

By the time 78 precincts were reporting the next morning, Nguyen held the lead at 32 percent followed by Esparza at close to 22 percent, making them the two likely contenders for the fall runoff.

Over on a busy stretch of Capitol Expressway, Esparza and a handful of campaign staff and volunteers patriotically picked a back room at America’s favorite 24-hour drunk tank, Denny’s, for their shindig. Like other labor-friendly candidates, Esparza and crew dined on humble food of the working class like chicken tenders, mozzarella sticks and nachos while waiting for the South Bay Labor Councilites to arrive.

“It’s in the district and it’s family-friendly,” Esparza said about her venue choice, although Fly has seen plenty of late-night diner action to know the latter part of that statement just isn’t true.

Franklin-McKinley School District trustee Rudy Rodriguez expounded on his admiration for Esparza before taking a subdued dig at Nguyen in the same breath.

“Maya was one of the few leaders who came out to help our district” during the Rock Springs flood, Rodriguez said. “Our council member at the time was not there. He was missing in action.”

Across town at Crema Coffee, fellow D7 contender Thomas Duong awaited the results with his friends and family over a spread of some tropical delicacies, including rambutan, the hairy, reddish Southeast Asian fruit with a milky-white center.

Duong, a newcomer to the political scene, said learning the politics of San Jose has been the most fascinating part of his campaign.

“Seeing the two disparities between the labor movement and the business side of it, and seeing how diametrically opposed they are and seeing the schism of politics in San Jose right now has been the most eye-opening part,” he said.

Duong wasn’t the only newbie on his campaign though, it was his manager—and friend—Alex Lee’s first go-around as leader.

“I’ve done campaigns before, but this is my first time managing one,” Lee said. “At first, he actually asked me and I said no because I’ve never managed a campaign before. And then he kept talking to me about it and I was like, ‘alright, I’ll help you.’”

Wesley Kazuo Mukoyama, who may be better known for suing the city of Santa Clara over an election method that he said put Asian-Americans at a disadvantage for council seats, was also in attendance at Crema Coffee. Mukoyama was one of the people who’d urged Duong to run for office.

“We need to promote an Asian candidate for some kind of office,” Mukoyama said. 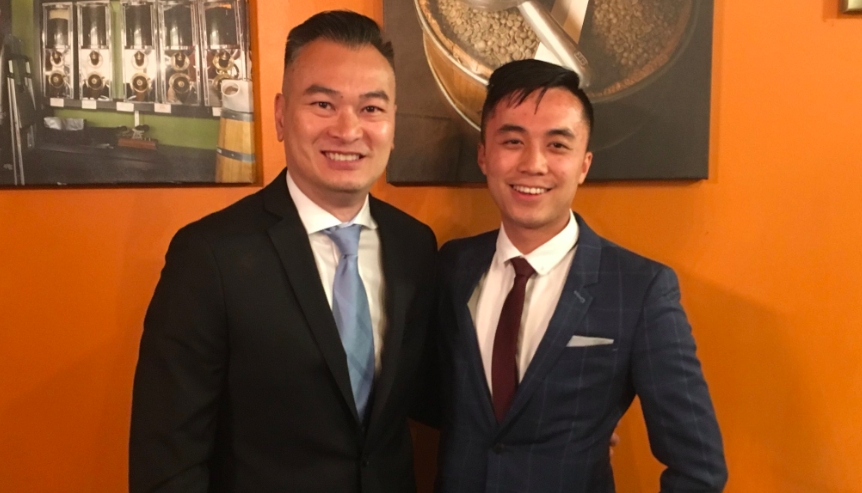