The Mercury News lost a slew of longtime journalists in 2017, and the year ended with word of yet another notable departure. The week before Christmas, the South Bay’s daily paper of record said goodbye to San Jose City Hall reporter Ramona Giwargis, who had been on the beat just short of three years. How exactly she departed is unclear, but she’s since lawyered up with Jim McManis, an expensive, labor-friendly attorney who’s sued the city on multiple occasions. Recent victories include a case that went to the state Supreme Court, which now forces elected officials to turn over messages that deal with public business but are sent from personal devices. McManis also successfully sued the city to pay back $50 million to its now-defunct Redevelopment Agency and he was victorious in the infamous Little Saigon dispute. He was recently overheard boasting, “I know where the bodies are buried at City Hall, and I have a feeling that is going to be useful in this case.” While both Giwargis and McManis declined to comment, insiders suggested the reporter’s sudden absence could be connected to a story she was working on involving Mayor Sam Liccardo and his close friend Carl Guardino, a registered lobbyist and head of the influential Silicon Valley Leadership Group. How much was gleaned from that reporting is uncertain—accounts have ranged from juicy to a quixotic witch-hunt—but it apparently caused a rift between Giwargis and her bosses at the Merc after they killed the story. Since joining the paper in mid-2015, Giwargis has consistently butted heads with Liccardo, and multiple sources in the mayor and city manager’s offices have complained to Fly in the past that her reporting contained factual mistakes. The Merc’s policies on “updating” stories hasn’t always been the most transparent, but there have been several instances in which Giwargis’ stories would be published online and end up rewritten a day or two later. A spokesman for Liccardo says the mayor “was not in any way involved in the Merc’s decision, and that he was as surprised as anyone when he heard the news.” (Memo to McManis: A Liccardo deposition could produce some interesting material.) Merc managing editor Bert Robinson noted in an email, “As a rule, we don't comment on these kinds of employment matters.” For his part, Guardino texted Fly, “Let me be unequivocal: I have never said to anyone at the Mercury News that Ms Giwargis or any reporter should be fired from his or her job. Stating otherwise is completely false.” Oddly enough, Giwargis has yet to change any of her social media profiles to note that she is no longer employed by the paper. 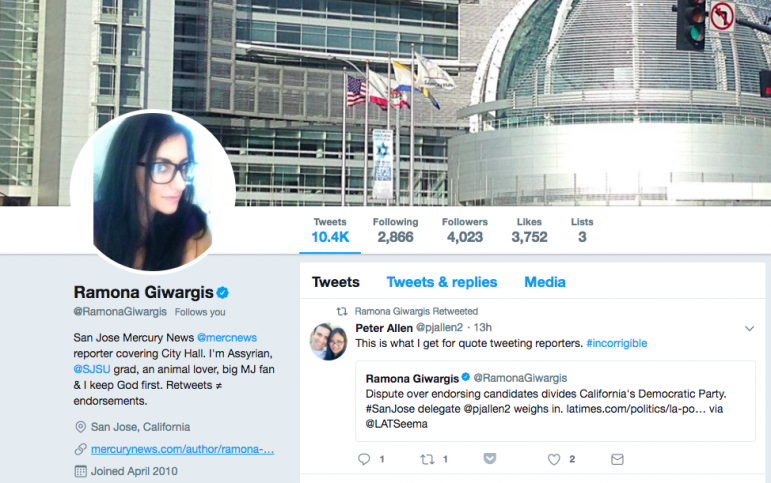