In commemoration of Earth Day, Santa Clara County leaders gathered to share how the county is preparing for what they call an environmental “triple threat,” and what residents can do to get ahead of it.

And they are all interconnected.

With the low amounts of rain fall, the region faces looming threats of drought, which increases threats of wildfires, which in turn, impacts air quality.

“We’re already on the offense in all three areas,” County Supervisor Cindy Chavez said. “We’re trying to do is get ahead of the problems because we know we know we can’t go through what we did last year.”

But Chavez, along with other leaders from County Fire, Santa Clara Valley Water and the Bay Area Air Quality Management District, fear that this year my be the worst yet.

This is because Northern California is experiencing its third driest year on record, with only 66% of its average snowpack.

“Eight of the last 10 years have been below average rainfalls and fuels have had little time to recover,” said Santa Clara County Fire Battalion Chief Mike Matheson. “Drought conditions and changing climate have caused more intense and longer dry seasons, suppressing vegetation, and has made our states susceptible to devastating wildfires.” 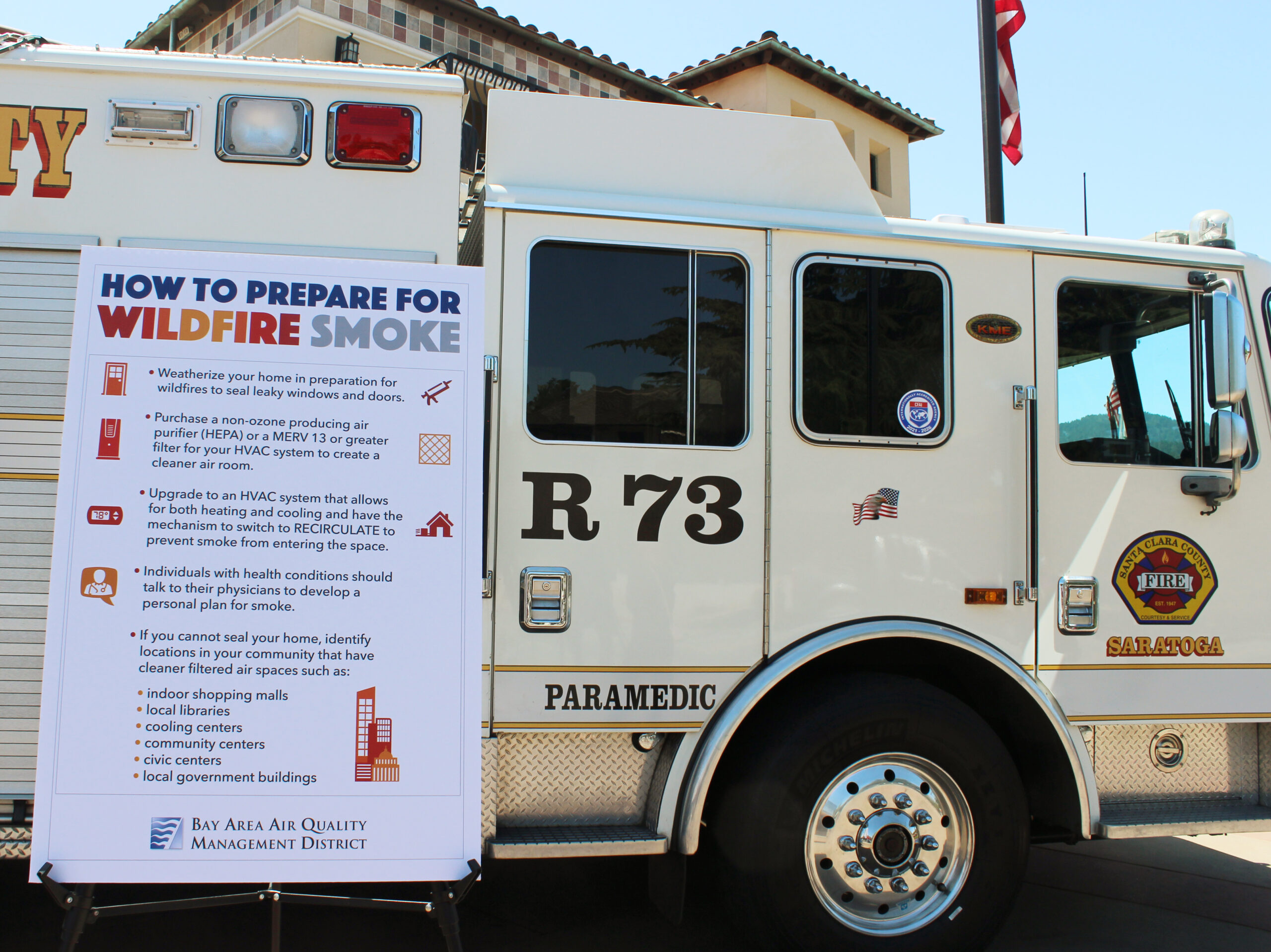 A display showing how to prepare for wildfire smoke rests against the Saratoga Fire Department's Rescue 73 located at the Santa Clara County Fire Station in Saratoga, Calif on April 22. (Jana Kadah/Bay City News)

By mid-November of 2020, the region experienced 900 wildfires that year, Chavez said.

“Depending on where we get our starts, I would expect to see the same type of fire behavior, aggressive fire behavior and heavier fuels, early in the season,” Matheson said.

That means wild-fire season could start as early as the first week of May and last until November.

To get ahead of the potentially devastating impacts, the state and CalFire created a new evacuation system called Zone Haven that would help residents know how close they are to threats like wildfire, mudslides or even an active shooter, the best evacuation routes and locate the nearest evacuation centers.

Zone Haven is expected to be ready for Santa Clara County by mid-Summer, Matheson said.

County fire is also offering resources to help residents prepare for the event of a fire or evacuation.

“Despite the extensive and coordinated efforts underway to protect and prepare our community, we cannot do this alone,” County Fire Spokesperson Luisa Rapport said.

Rapport urged residents to take advantage of county fire resources sign up for county fire webinars and Santa Clara County Alerts as well as sign up for the “nationally recognized Ready Set Go program that takes residents through the simple steps necessary to prepare their homes and their families for wildfire.”

Matt Keller, a spokesperson for Santa Clara Valley Water, also said residents’ actions in the next months were paramount in stopping the county from falling into a drought.

This week, Gov. Gavin Newsom declared a drought in Sonoma and Mendocino counties and put water restrictions on other counties that were close to being in a drought.

Santa Clara County is still in the clear for now, but if water levels continue to decrease, Valley Water could also place water use restrictions or hike up prices.

So, to prevent all those things, the water district offers several rebate and incentive programs, found at watersavings.org, to help residents reduce water consumption, stop leaks that waste water and make showers, washing machines and even lawns more drought ready.

Keller noted that already those programs have been proven effective. Since the county’s last drought in 2017, residents were able to reduce water consumption by 20%.

Keller pointed specifically to the Anderson dam seismic retrofit project that will keep residents safe from overflow or flooding and will increase the county’s water storage capacity.

“That’s important because we have to bring a lot of water inside Santa Clara County to meet demands here and make sure that our groundwater supplies are healthy,” Keller said. “We import, about 50% of our water here.” 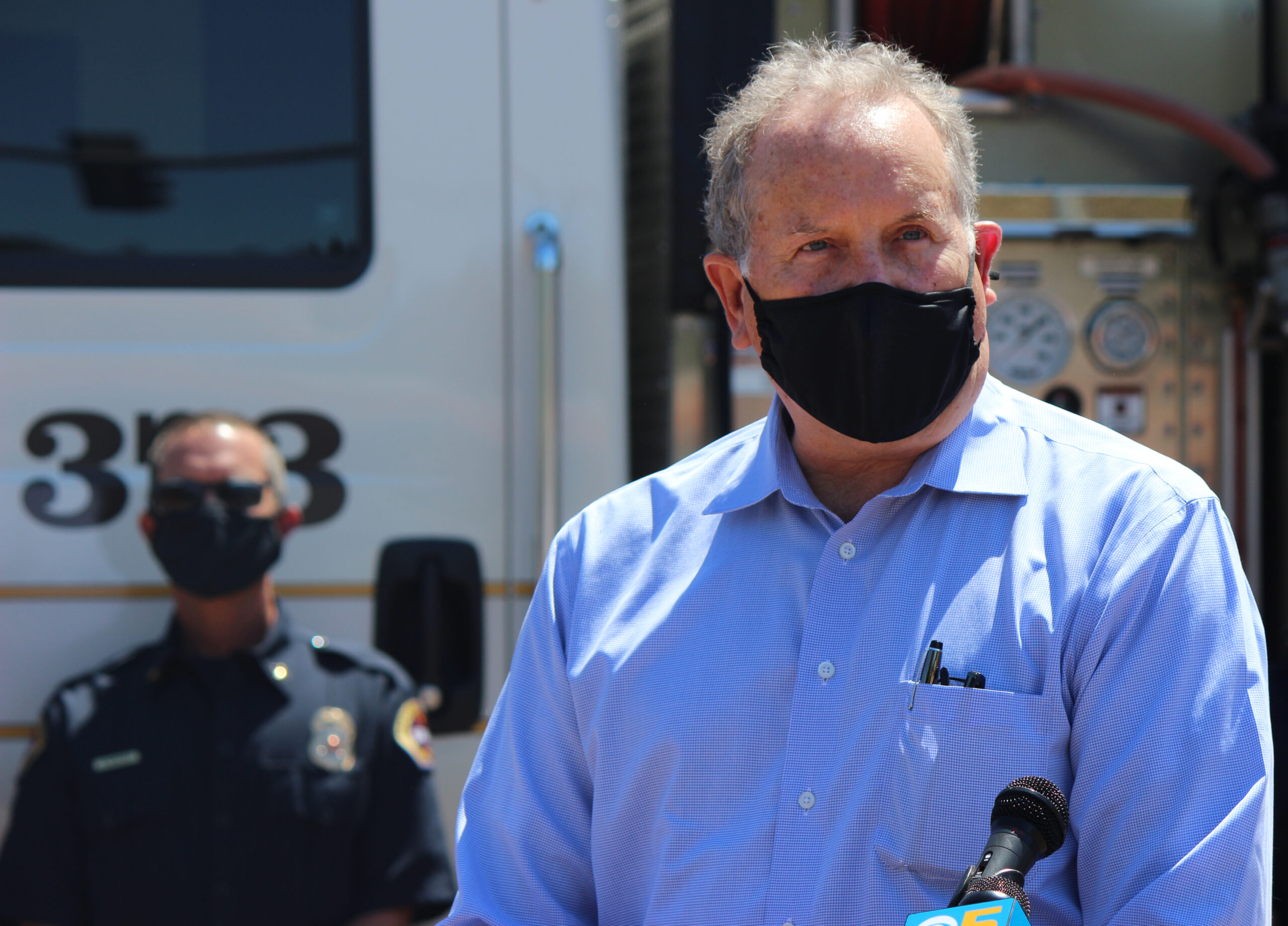 Part of that program was lobbying the state to support legislation that provides local governments with funding to ventilation projects and clean air centers for vulnerable populations, which recently passed.

“Approximately $5 million will be made available to cities, school districts in impacted communities, county emergency management authorities and disaster response organizations,” Broadbent said. “These will be instrumental in protecting public health in our most vulnerable populations.”

The air district also teamed up with the Regional Asthma Prevention Management Program to provide filtration units to MediCal recipients with asthma.

And Santa Clara County Supervisors are launching a very similar initiative as well.

This week, supervisors unanimously voted to create a $10 million air filtration grant program that would provide air filtration systems and installation services to small businesses and nonprofits impacted by Covid.

Chavez, who proposed the grant idea, said she hopes it will be ready for people to apply by June.

Wildfire resources by County Fire can be found at https://www.sccfd.org.

County Fire’s Ready Set Go Program will take place on April 27 from 6:30 to 8pm on Zoom. Residents can register online.