Silicon Valley activists this week joined a nationwide campaign protesting a Trump administration proposal to narrow the definition of gender and roll back civil rights protections for trans and gender-nonconforming people.

Scores of demonstrators gathered Wednesday outside San Jose’s City Hall, waving rainbow and trans pride flags, carrying signs expressing support for the LGBTQ community and chanting “we will not be erased” and “I exist.”

“Whatever policy is written, whatever somebody wants to say, we’re here,” Anthony Ross, head of transgender services for Santa Clara County’s Office of LGBTQ Affairs, told the crowd outside the City Hall rotunda. “We’re not going anywhere, and I love that about this community. We are resilient.”

San Jose’s rally was one of hundreds of similar events held throughout the country in response to an unreleased memo from the U.S. Department of Health and Human Services that aims to redefine gender under Title IX—a federal law that bans gender discrimination in publicly funded education and healthcare programs—as immutable, binary and based on a person’s genitalia at birth.

Within hours of the New York Times breaking news of the memo Oct. 21, the hashtag #WontBeErased began circulating on social media. Vigils and protests took place in New York City that same evening and spread from state to state in the ensuing days.

Santa Clara County on Thursday issued a statement condemning the proposed policy change, saying it would undermine the rights of transgender and non-binary people in educational settings and effectively promote discrimination.

“President Trump has demonstrated once again that he never cared about the safety, health, or welfare of the LGBTQ community,” county Supervisor Ken Yeager said in a news release. “This attempt to erase transgender, non-binary, and gender non-conforming people from legal existence is his most callous act yet. To those affected by this cruel plan, I want to say to you that this county will continue to work toward your protection and well-being.”

San Jose Vice Mayor Magdalena Carrasco introduced a memo of her own asking city staff to study the pending Title IX change and come back with a report on its impact at an upcoming Rules and Open Government Committee meeting. She also recommends adopting a resolution opposing any federal policy change that limits the rights of the 1.4 million Americans who identify as transgender.

“In the past few years, there has been a significant rollback of rules protecting the transgender community,” Carrasco states in her memo. “Many of these protections began during the Obama administration and the current administration is attempting to erase the federal civil rights protections for transgender people in education, employment and access to healthcare.”

Sera Fernando, a trans Filipina who emceed Wednesday’s in San Jose, said she’s fortunate to have begun her transition five years ago in a community that supports her and under a presidential administration that began advancing rights for trans folks.

But what a contrast, she lamented, to the civil rights rollbacks under Trump.

“When you have a government entity saying you don’t see transgender as a form of gender identity, there’s a validation right there for others to totally disregard you as a person, to disregard your pronouns and to, basically, erase your existence,” she said.

This past week has taken an emotional toll, Fernando said.

“It hurt,” she told San Jose Inside over the phone Friday. “Just hearing the word erasure was a lot to take. Trans people belong in this world, but over and over again we have to remind everyone. That takes a huge toll, to constantly have to live with that burden.”

Below are some photos by Greg Ramar of San Jose’s #WontBeErased rally. 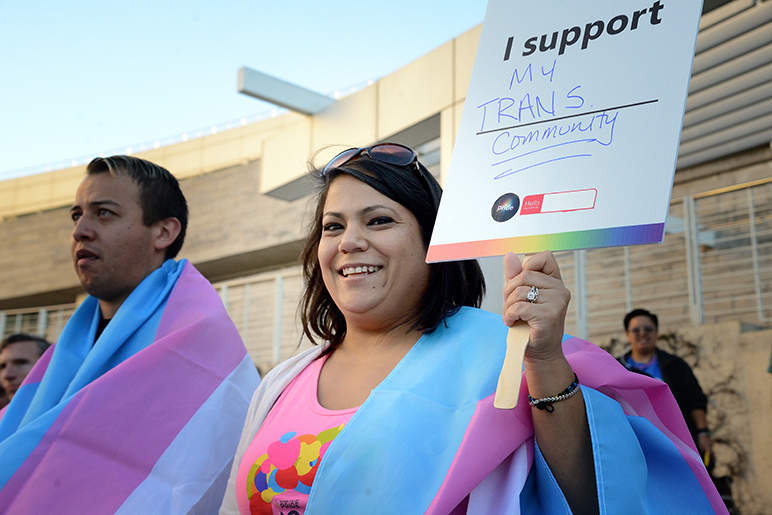 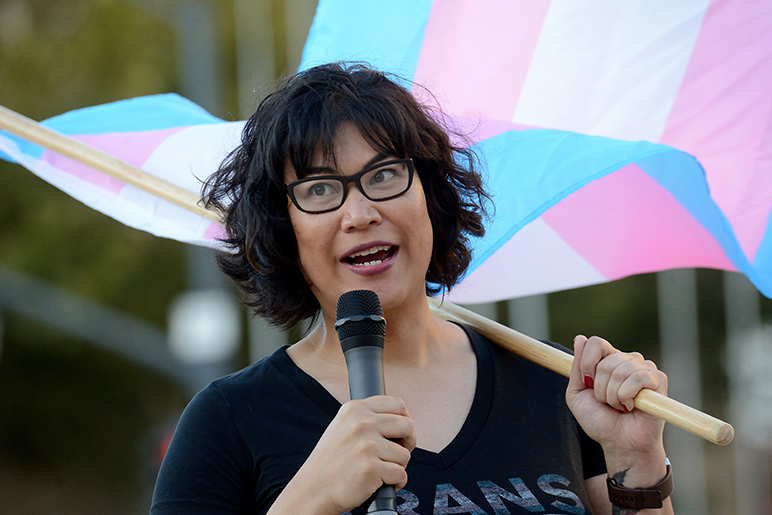 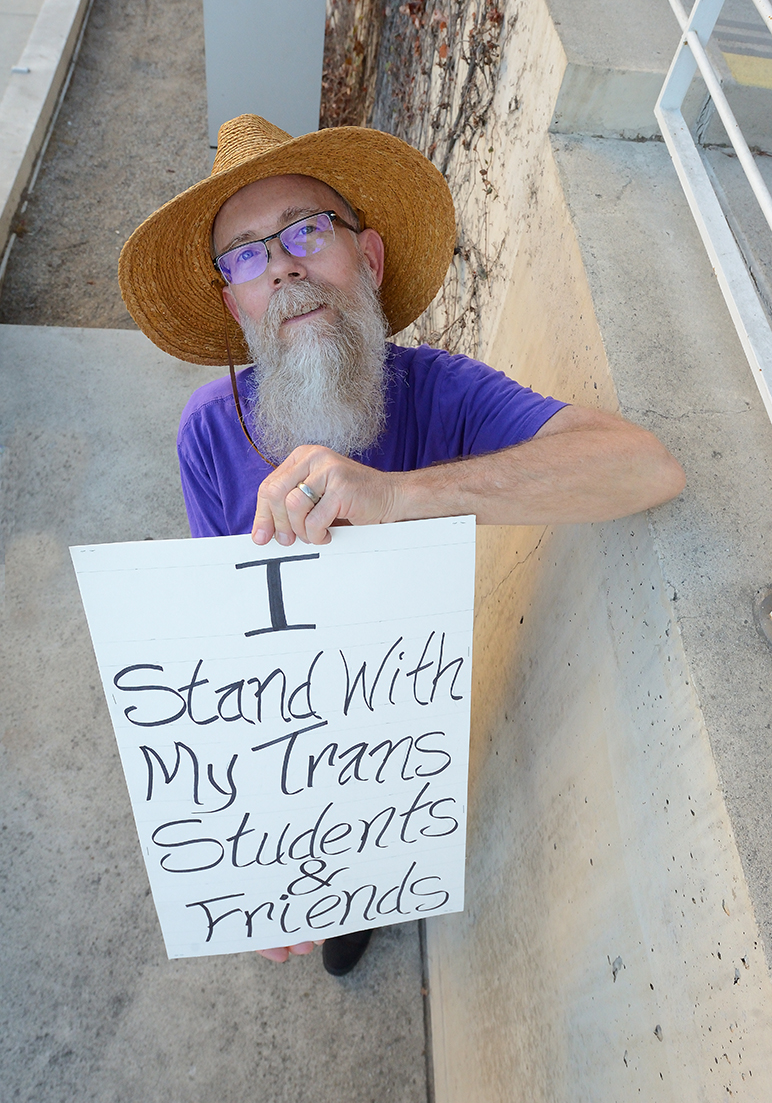 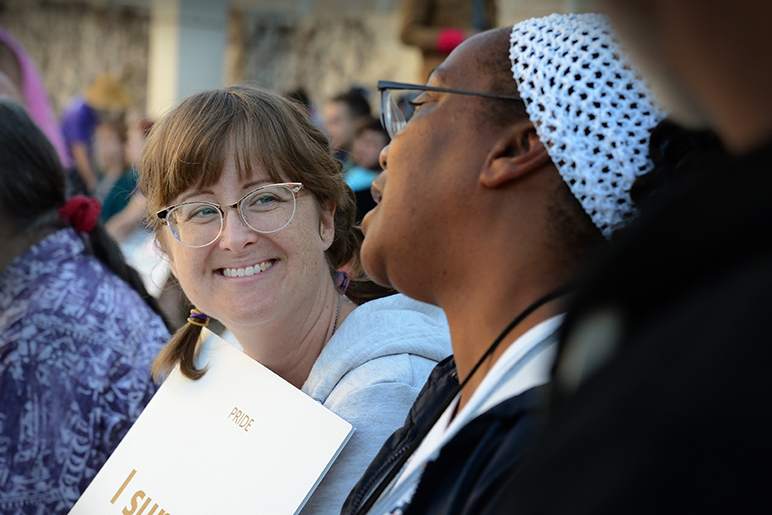 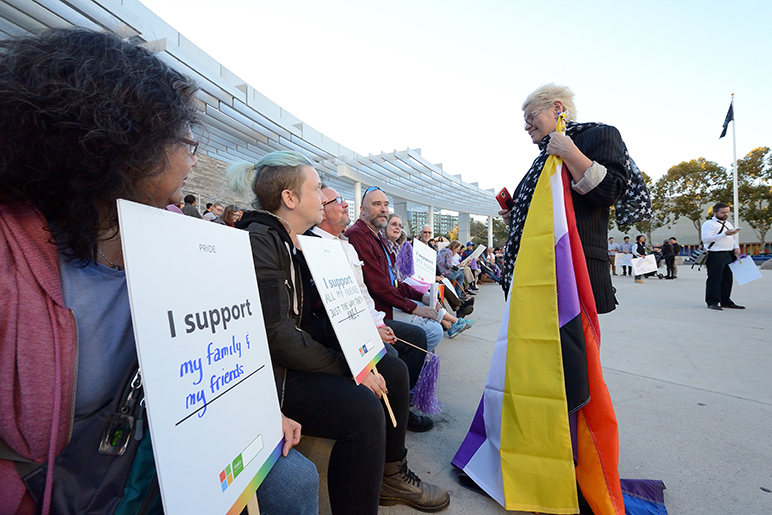 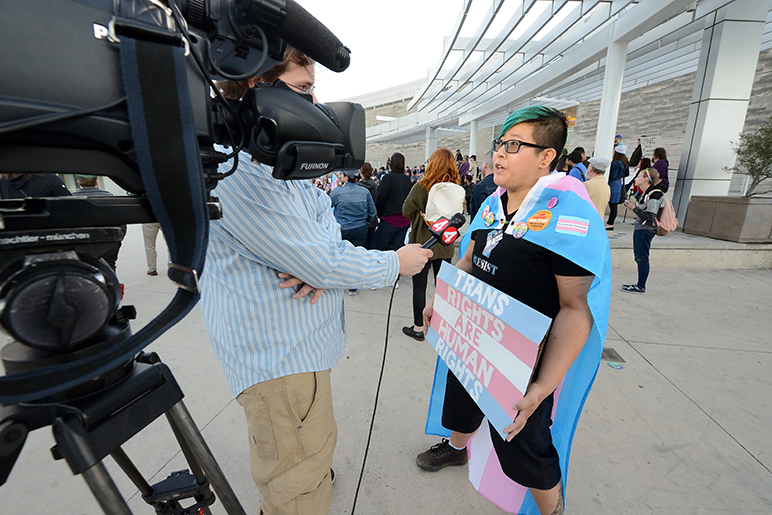 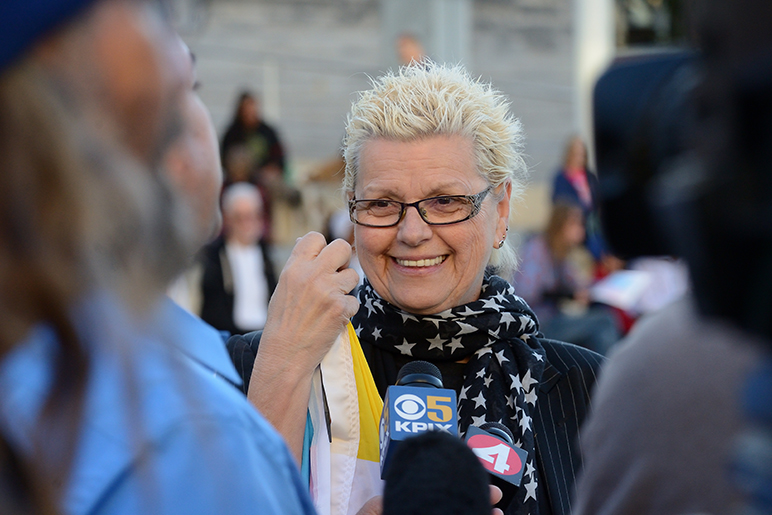 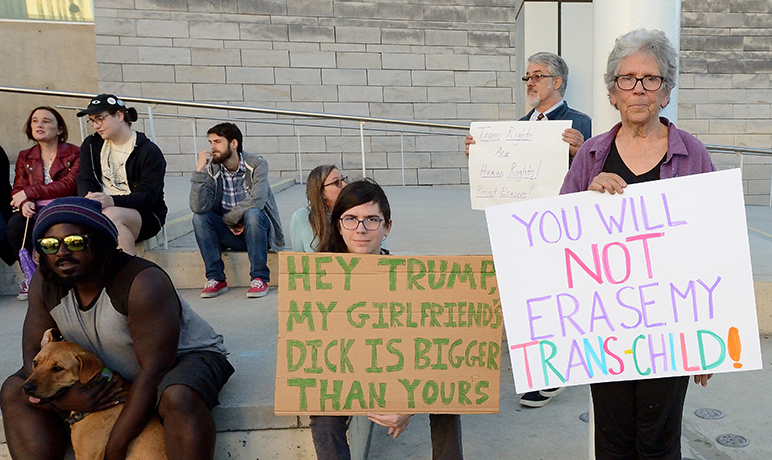 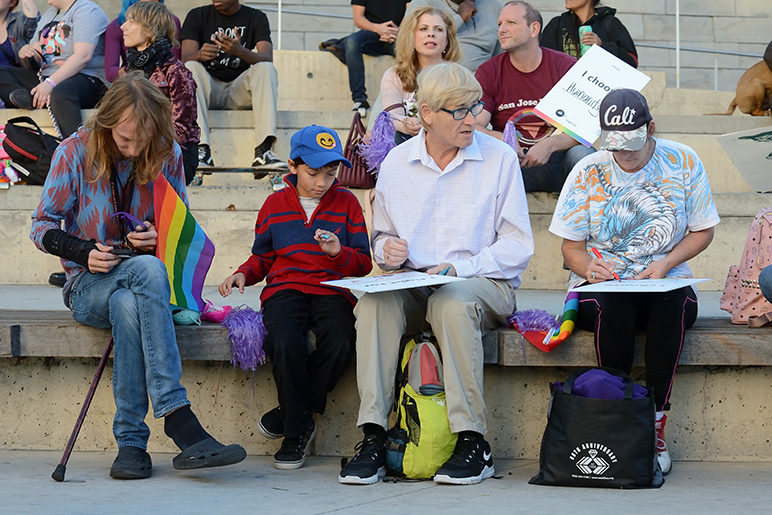 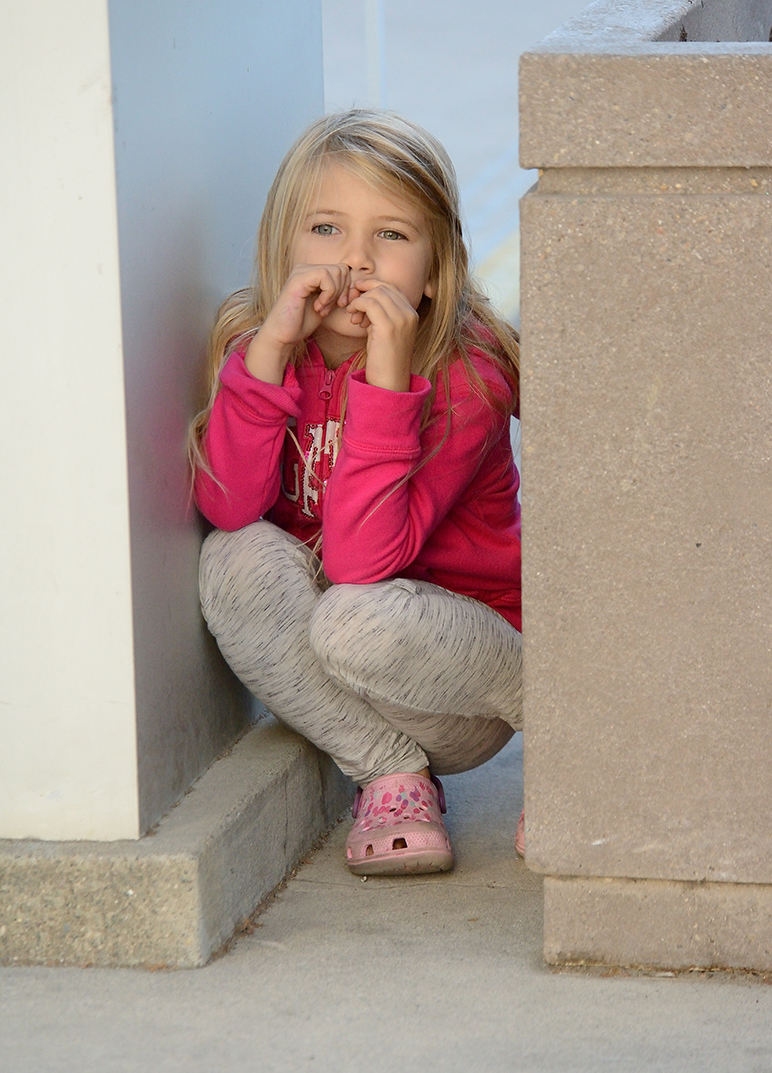 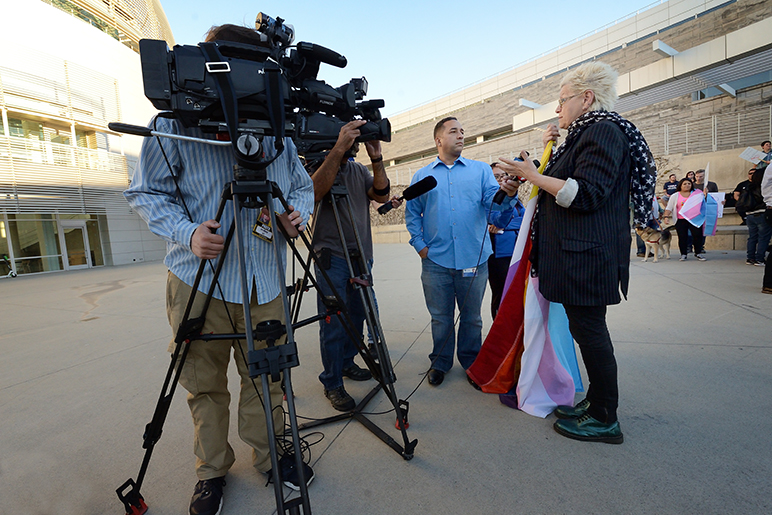 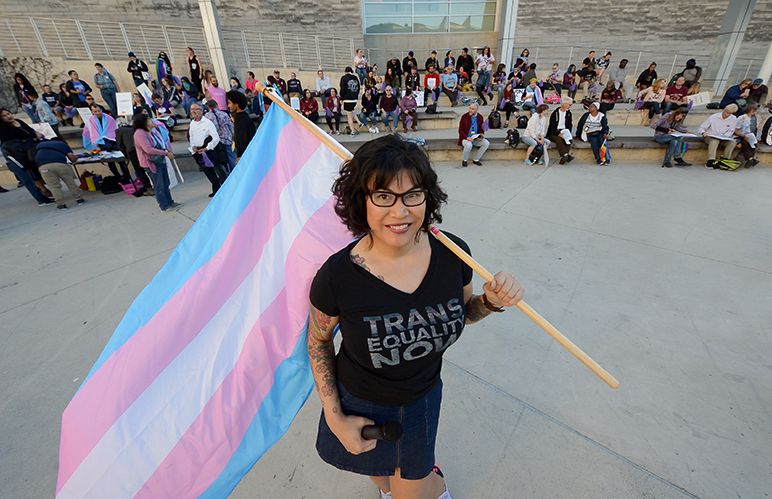 Sera Fernando, a trans woman, shared her story about coming out as non-binary and beginning her transition five years ago. (Photo by Greg Ramar) 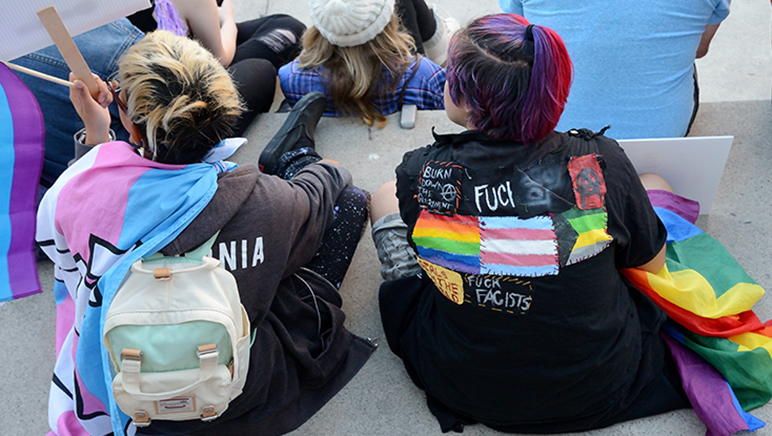 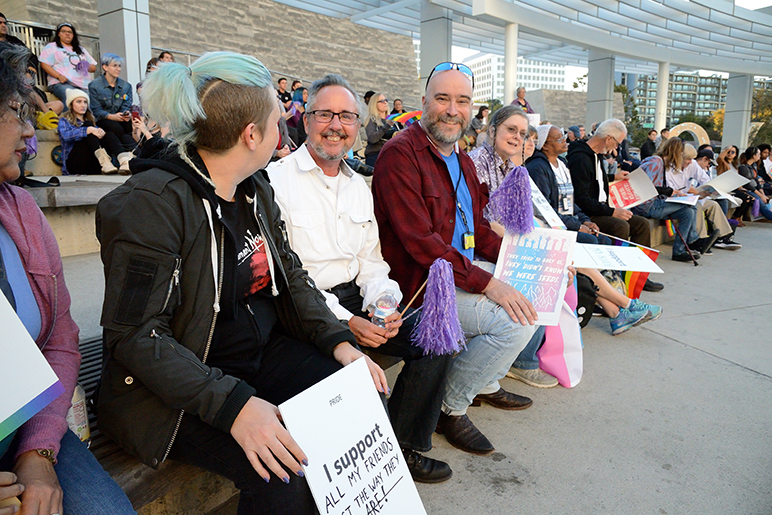 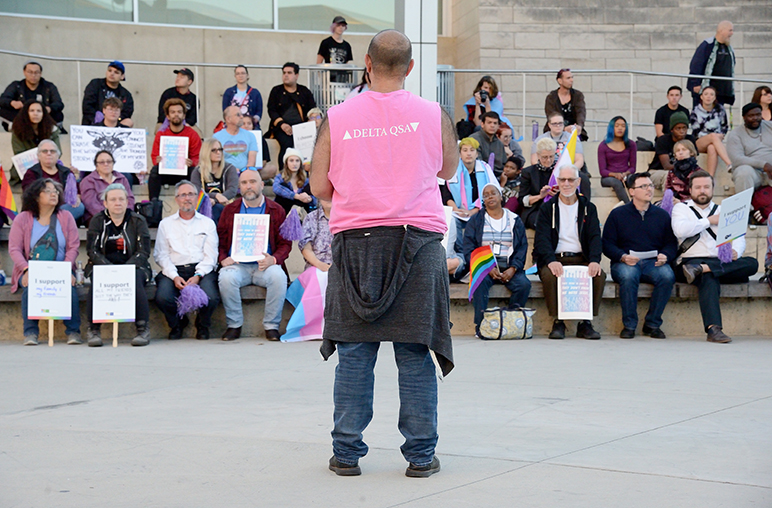 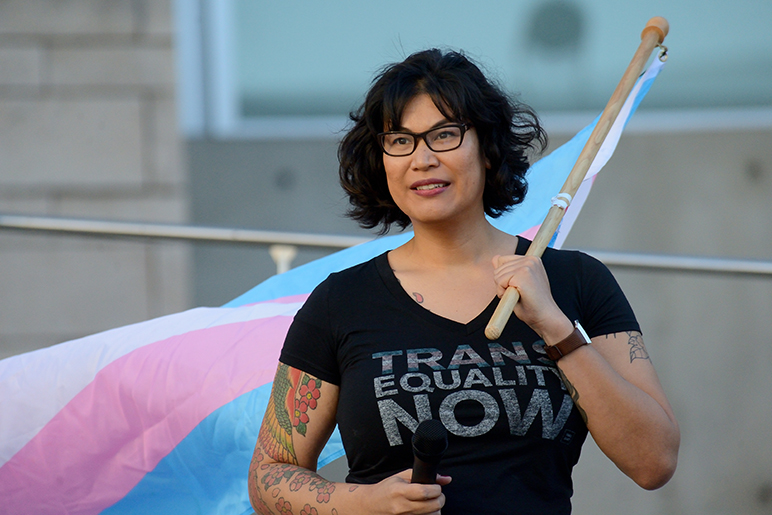 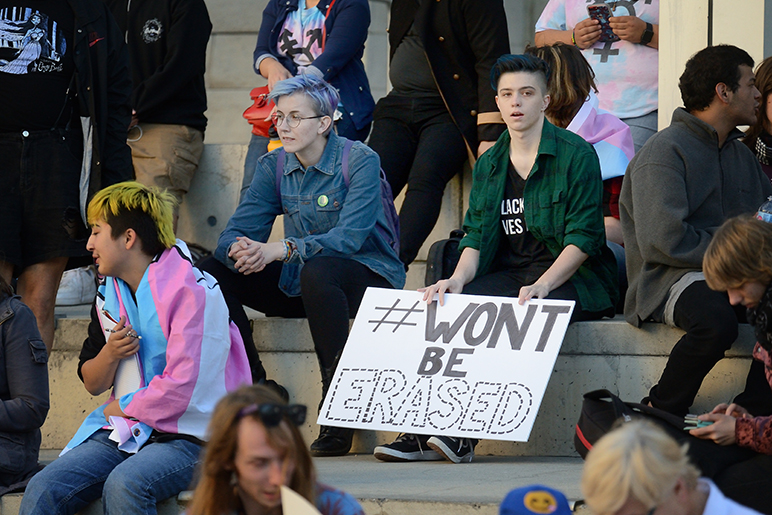 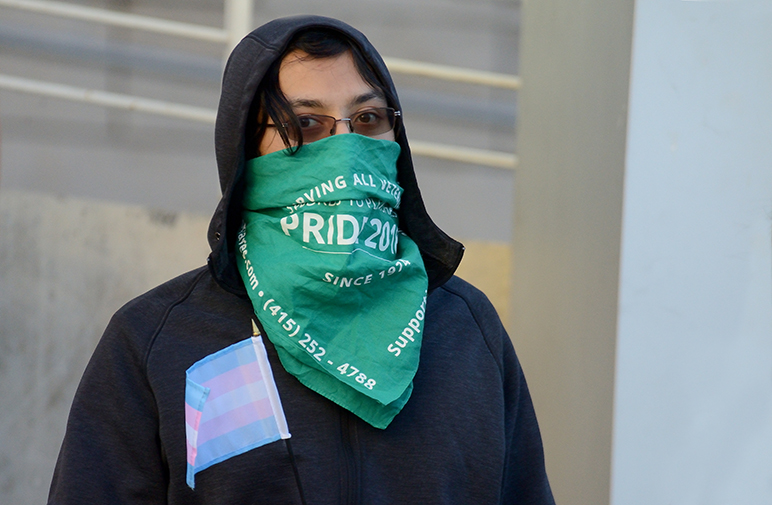 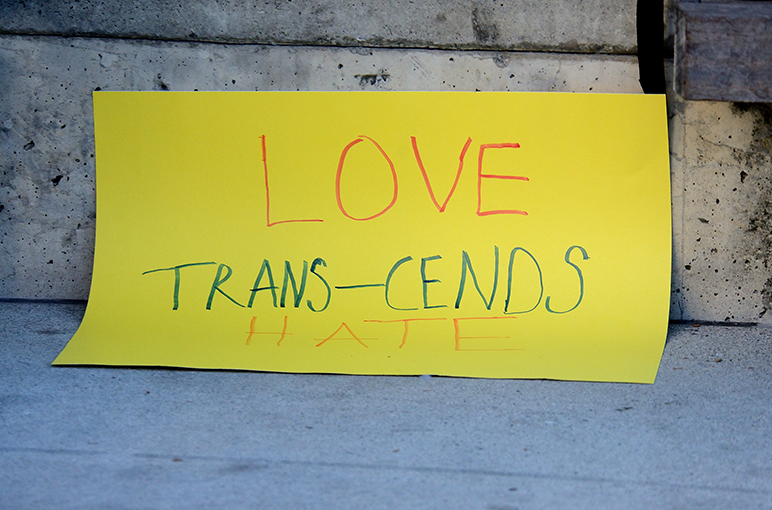 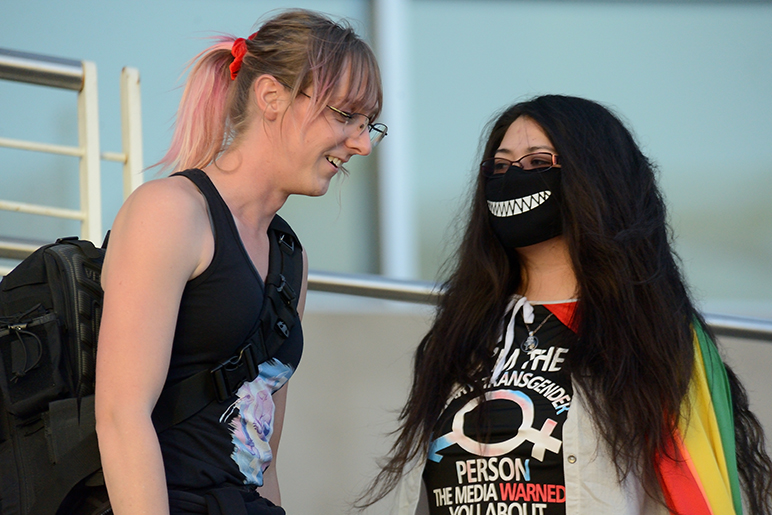 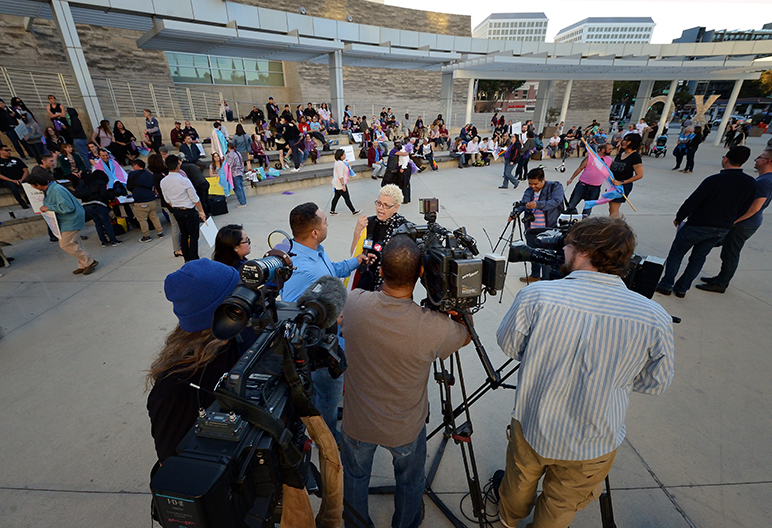 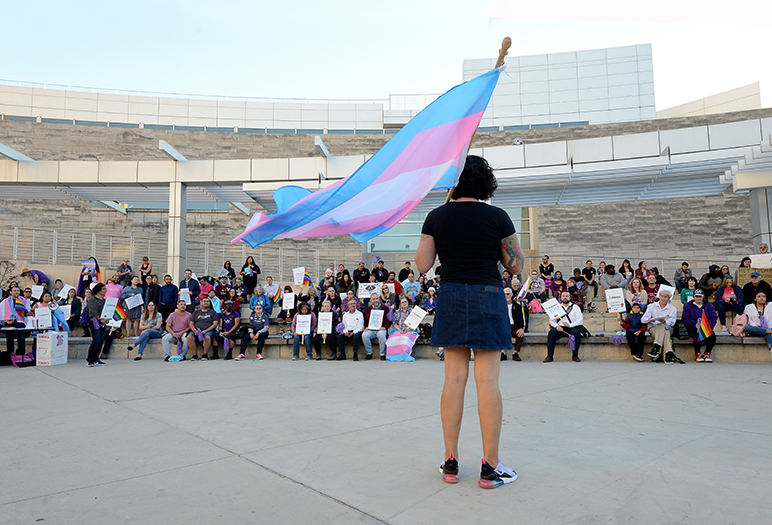 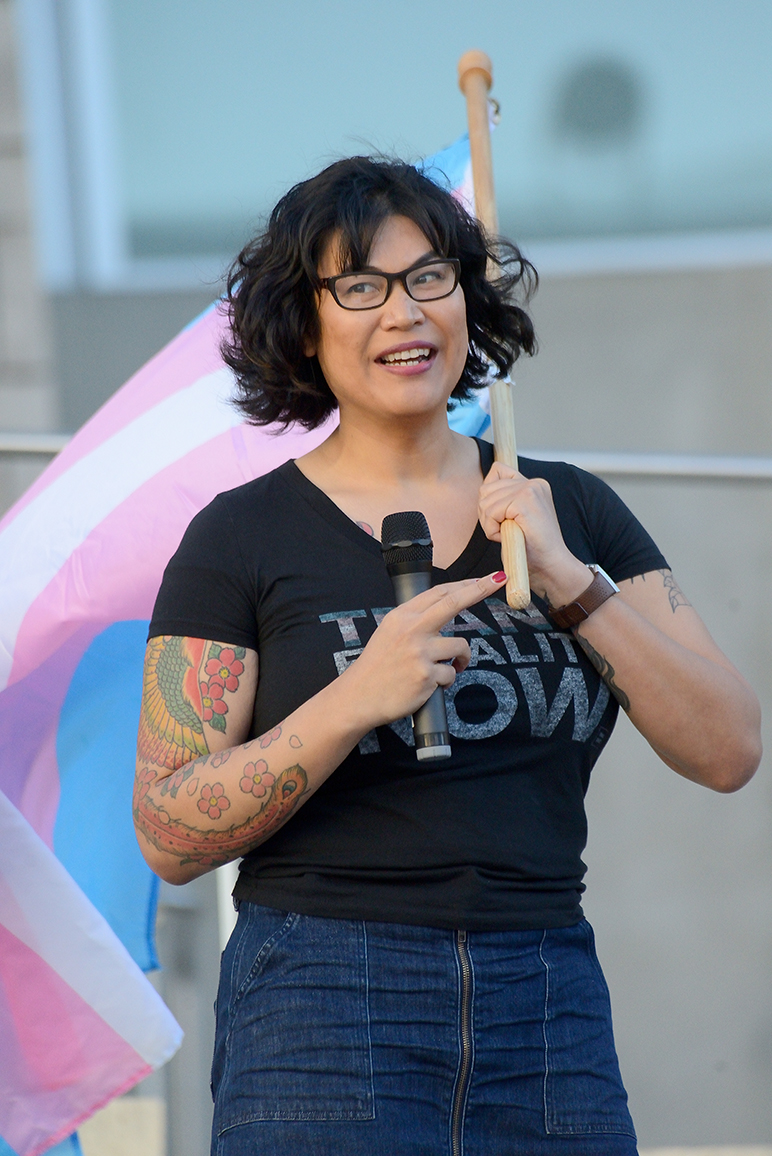 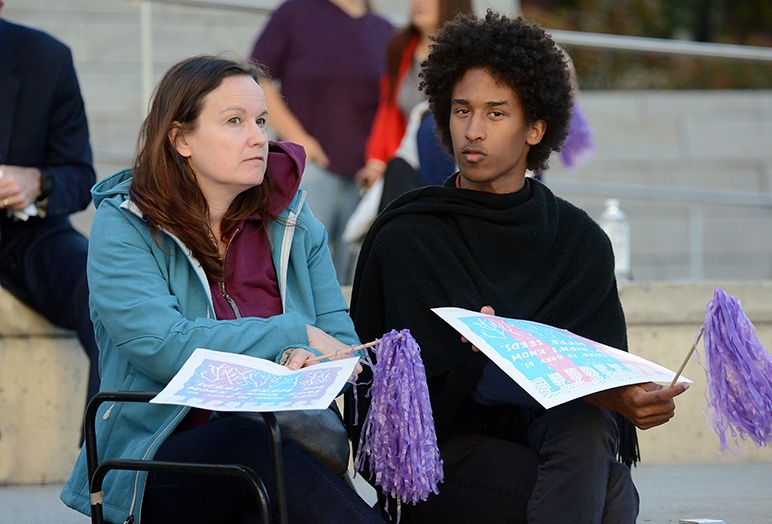 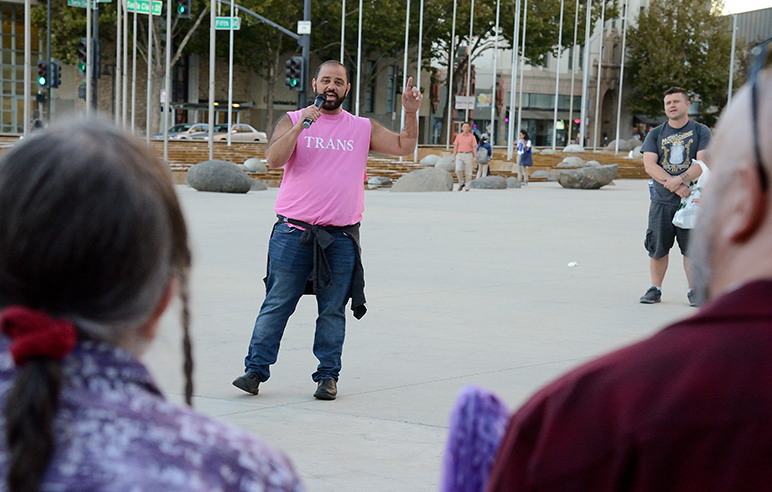 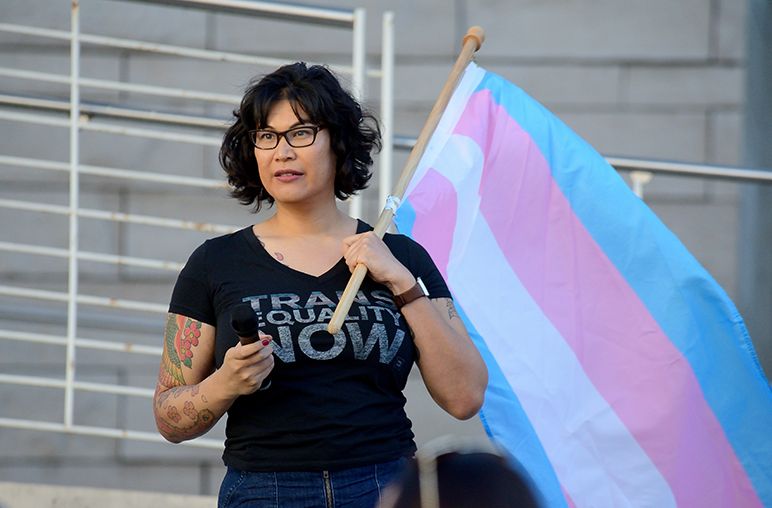 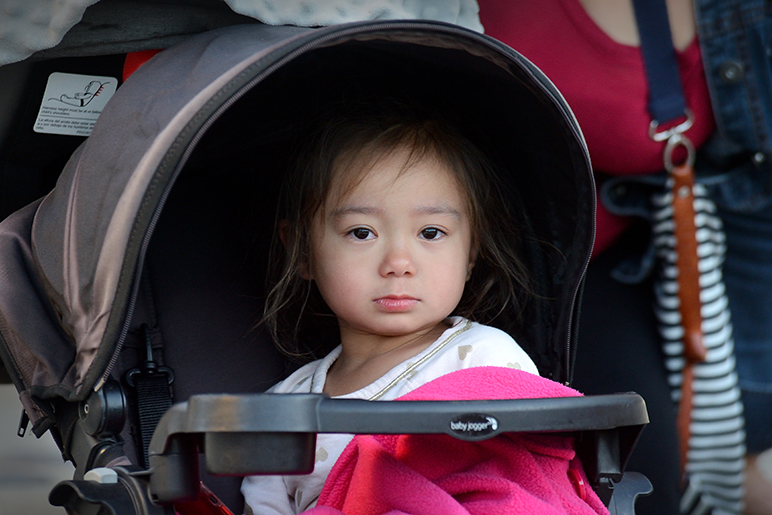