Bennet Marks was a nervous wreck when Apple quoted him in the company’s newspaper announcing the 1986 launch of gay employee group he founded, Apple Lambda—outing him in the process. In the 1980s and 90s, he became Apple’s de facto LGBTQ spokesperson amid a bloom of nondiscrimination policies in the high tech industry.

“I decided to do it because it was the right thing to do, not because I felt safe,” Marks said in a recent Zoom interview from his Sunnyvale home. “The second I saw it in print, I had this enormous sense of relief that I didn't have to ever worry about coming out to somebody at Apple again; I was public.”

A decade later, in 1997, his partner Kim Harris, a manager at Hewlett Packard, was prepped for swarms of reporters and live broadcasts when the company announced similar benefits. The more conservative tech giant’s news only generated an inch-long column in the Mercury News, highlighting how quickly these progressive changes became “old news” in Silicon Valley.

The Sunnyvale couple, partners since 1982 and married since 2008, were at the bellwether of LGBTQ corporate equality. In addition to newspaper ink and news reels, their experiences are now documented within Queer Silicon Valley, a local history project documenting 50 years of the gay, lesbian, bisexual, transgender and queer community in Santa Clara County, from its agricultural roots to its tech legacy.

As generations grow older, a pandemic wrecks havoc and LGBTQ rights come under renewed scrutiny, Marks and Harris said the stories of Silicon Valley’s queer history are as vital as the policies they fought to obtain.

“If I had thought of it from a historical point of view I would have taken and organized more photos,” Marks told San Jose Inside. “I really wish I had known it was something really worth documenting, but I didn't realize that at the time; I was worried that I was going to lose my job. Young people today, they don't know how bad it was, and that means they don't know how bad it could get.”

Harris chimes in: “I think it's important that this not get lost.”

That’s the goal of Queer Silicon Valley: preserve the emergence and growth of the LGBTQ community in Silicon Valley through archival documents, personal narratives, photographs, interviews, and videos.

Spearheaded by the BAYMEC Community Foundation and its executive director Ken Yeager—a former Santa Clara County Supervisor and first openly gay county official—the  project provides a window into the culture, crime and organizations of LGTBQ people. Eventually, the virtual exhibition, funded by a $60,000 grant from the county, will find a home at History San Jose, when it reopens.

Alongside a small, dedicated production staff and around 100 other contributors, Yeager dialed up old friends, colleagues and others who shared their tales and pointed him to the next Zoom call. Even the 67-year-old activist, professor and politico had things to learn.

Yeager knew of ProLatino, a group for gay latinos launched in the ‘90s, but not how the group was founded or why it dissolved. He bought books at feminist bookstore and coffeehouse Sisterspirit but couldn’t recall its events. 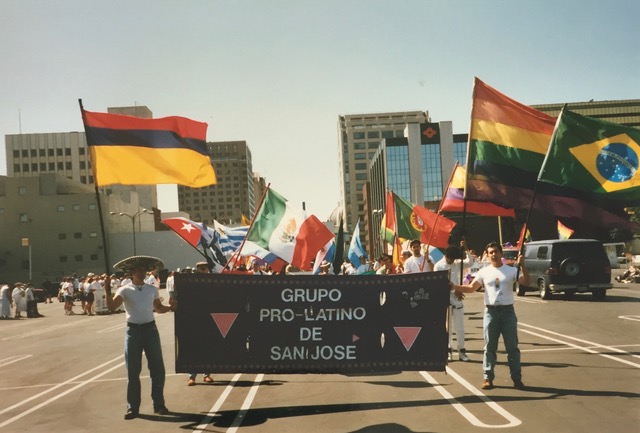 But what Yeager does know is that the history of how LGBTQ people in Santa Clara County went from being a marginalized population with little political sway, to getting a seat at the table is crucial for folks fighting challenges ahead. “Why not learn, so when the next assault on our rights happens, we know how to organize or who to contact, rather than giving up thinking, ‘There's nothing that I can do?” Yeager said.

Daniel Moretti, a 37-year-old San Jose native, thought he knew a lot about the LGBTQ community from his work as a program manager in the county’s Office of LGBTQ Affairs—the first of its kind nationally. Then, as an advisory board member for Queer Silicon Valley, he saw a new side to the community.

“To think that there was an organization of queer people of color organizing, to me that was really inspiring. Why don't I know this history?” he said. “This website kind of humbled me; I have a lot more to learn.”

The project’s release comes as the United States Supreme Court reaches a 6-3 conservative majority and federal legislation protecting the LGBTQ community, including marriage equality, the Affordable Care Act and employment discrimination, may be on the line.

“When you think of all the rights that we could lose so quickly, part of the story that's being told is how the gay community—disenfranchised, excluded, no political allies—organized to a point where we have the respect and the political capital that we have,” Yeager said. “It didn't just happen overnight.”