At least that’s the verdict from San Jose city officials, who say a viral apology that appeared to be from the notorious protester-taunting SJPD cop is a hoax.

“Our forensic analysts have worked with Facebook/Instagram to have the post deleted and the account/user deactivated,” San Jose City Manager Dave Sykes said in a statement Wednesday evening. “The post seemingly was intended to be malicious. It does not reflect the views of the city of San Jose or the San Jose Police Department.” 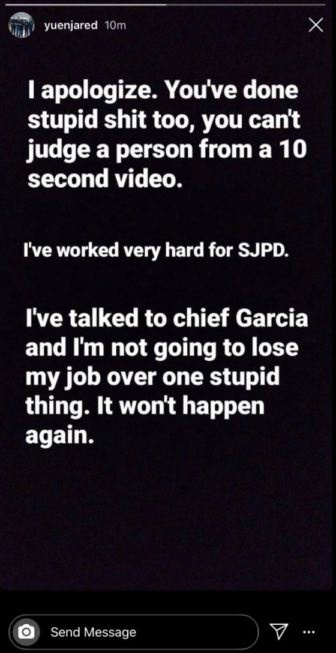 The social media post has been deemed a fake.

The statement was made to look like it was written by Yuen, a San Jose policeman who sparked national outrage after footage of him smirking and swearing at protestors exploded nationally on social media.

In the videos, which have been shared millions of times on various platforms, Yuen is overheard saying “let’s get this motherf*cker,” and in another clip, “shut up bitch” to some of the protestors who descended on downtown to march against police brutality.

On Wednesday—a few days after become a household name for anyone paying attention to the George Floyd protests—a screenshot of an Instagram story by a user going by the name yuenjared began circulating online.

It also implied that the disgraced officers had spoken to SJPD Chief Eddie Garcia. “You’ve done stupid sh*t too, you can’t judge a person from a 10 second video,” it read. “I’ve worked very hard for SJPD. I’ve talked to Chief Garcia and I'm not going to lose my job over one stupid thing. It won’t happen again.”

Good thing it’s bogus, because that’d be a sorry excuse for an apology anyway.

Yuen, who has yet to speak publicly about the matter, has been bumped to off-street duty pending an internal investigation.