San Jose is poised to give its police officers a sizable pay raise, starting with a 10 percent increase by summer and another 10 percent phased in over the following two years.

The contract, which comes up for a City Council vote Tuesday, would also grant one-time $5,000 retention bonuses and an additional 3.75 pay bump for officers who complete mandatory crisis-intervention training.

The tentative agreement comes after years of political fighting between the city and its unions, which blamed voter-approved pension reforms for depleting the police force.

According to the latest tally, the San Jose Police Department has nearly 200 vacancies and one of the lowest cop-to-resident ratios of any major city in the U.S. Since 2012, 300 SJPD officers have resigned and 217 have retired. In 2016 alone, another 21 resigned and 39 retired. Of the 1,109 budgeted positions, only 875 officers are considered patrol-ready. 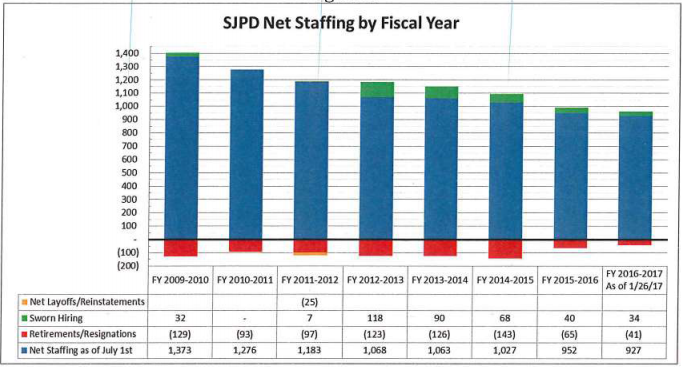 “We have almost 200 vacancies in our police department currently—with ample money in the budget to hire cops, but no qualified officers to take the job,” Mayor Sam Liccardo wrote in a memo signed by Vice Mayor Magdalena Carrasco and Councilman Raul Peralez. “Simply, we cannot hire officers fast enough—despite considerable gains in our academy recruiting—to compensate for the retirements and departures, and we continue losing ground to this day.”

Take-home pay for most San Jose officers is about $15,000 less than what’s offered in Oakland and San Francisco, they added. And the proposed labor agreement would make San Jose more competitive with other regional agencies.

“Moreover, unlike pension and retirement giveaways of more than a decade ago, the higher salaries come at a cost that is completely transparent to our taxpayers,” Liccardo’s memo reads. “Taxpayers know exactly what we’re paying, and our officers know what they’re getting. No unfunded liabilities, no optimistic scenarios, no hidden costs.”

The pact also includes concessions such as longer rotation of patrol officers on each beat from six months to a year, so cops can become better acquainted with the communities they police. It expands the responsibilities of un-sworn community service officers to give sworn officers more time to focus on high-priority calls.

The contract requires cadets to pay the city back for academy training if they voluntarily leave San Jose within their first five years of service. But it also offers a $7,500 incentive for recruiting cadets or officers from other agencies.

In a message to his constituents, Councilman Johnny Khamis raised concerns about the contract, calling the city’s overall budget and pension costs unsustainable.

“[T]he City Council will vote this Tuesday on a new contract with our police union, the San Jose Police Officers’ Association, that, when fully implemented, will amount to a 22 percent pay increase and have an annual price tag of about $48.5 million,” he wrote in his February newsletter. “Where would this put us in three years?”

According to Khamis’ calculations, the new police contract along with pension liabilities and one-time funded items that will need additional cash in the next fiscal year, this would bring the projected deficit in 2020 to more than $66 million.

“It’s important that we live within our means while keeping the promises we made to the voters to deliver on the things we said we’d deliver on,” he concluded. “There may be budgetary clouds on the horizon, but let’s be sure we’re not creating dark clouds of deficits by our own actions.” 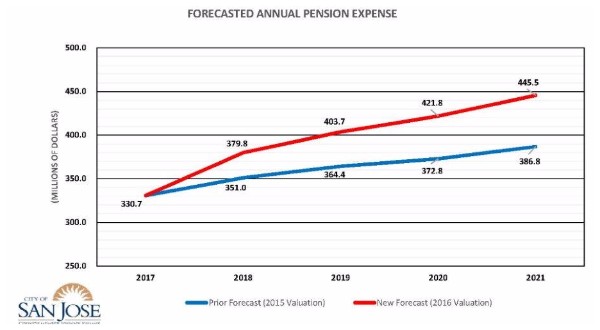 More from the San Jose City Council agenda for February 7, 2017: